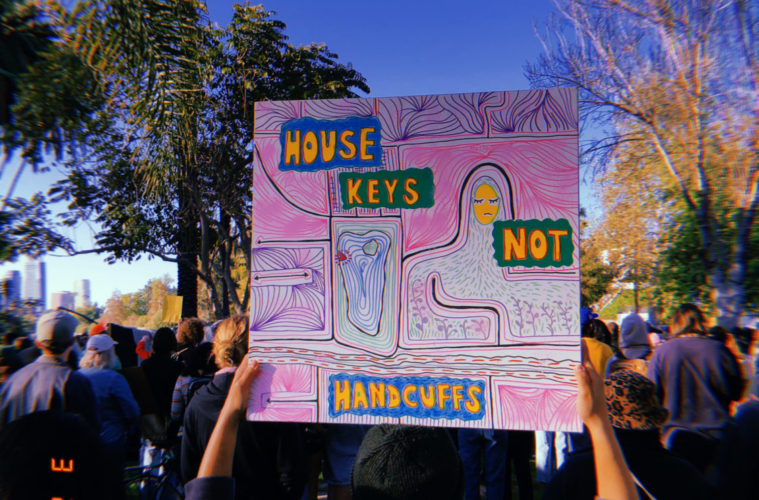 A planned closure of Echo Park Lake led activists to protest over “sweeps” of the homeless community that resides there.

The city will reportedly clear out Echo Park Lake Thursday, and fences will be going up to border the area, according to the L.A. Times.

Hundreds gathered holding signs with phrases such as “Dignity not displacement” and “House keys not handcuffs.”

“Proposed sweeps of homeless encampments don’t resolve the issue of homelessness,” Cass Flower, who attended the morning protest, said.  “We need to be supporting those who need it, not shoving them in a dark corner. The Echo Park encampments have built a loving community at the lake, a safe haven where they can build trust and safety with one another and have a sense of stability. Why would we take that away, especially during a pandemic?” The Echo Park Lake closure will reportedly repair more than $500,000 in damage, according to a representative for Los Angeles City Councilman Mitch O’Farrell.

Theo Henderson, activist and host of We The Unhoused, believes O’Farrell is trying to remove the homeless population “under the pretense of renovation.”

“Over the course of a year, he has engaged in aggressive police action,” Henderson said of O’Farrell. “The pandemic has aroused a lot of anti-unhoused sentiment in that area. He is always listening to the NIMBYs (Not In My Back Yard) and the people that are housed and creating the narrative that it’s a dangerous area… with drug usage and violence and the like.” Henderson added that had been on Echo Park Lake grounds since Tuesday night and people in the area have not been given formal notice of the area’s clearing.

O’Farrell made a statement on the homeless community in Echo Park Lake, Wednesday, but did not directly address what would happen after the start of renovations.

“More than 120 people experiencing homelessness at Echo Park Lake have been successfully moved into transitional housing. This includes non-congregate shelter options at a nearby Project Roomkey site,” O’Farrell said. “This work to provide housing and a pathway to stability is ongoing and we still have non-congregate shelter options available to anyone who needs housing at the Lake. Our outreach workers must be able to continue engaging with the unhoused— the individuals who have asked for and want a safe, secure place to sleep each night. There is still no confirmation of when the renovations will officially begin.

Activists plan to remain in the area and set up encampments through the night.