The Tale of Tasselfairy in Cloudland: Local Artist Charges Appropriation by Lisa Frank

When it comes to art and style, sometimes there’s a fine line between creative inspiration and outright theft. Boundaries can get blurry, especially in terms of inspiration. When an emerging artist influenced by a more established figure gets noticed by their hero, and in turn the hero ends up influenced by them, it can cause uncertainty about who concocted what. It’s a tenuous place to tread, and it’s where local artist/designer Amina Mucciolo (a colorful social media creative also known as Tasselfairy) has found herself after calling out the popular, eye-popping brand Lisa Frank for directly appropriating her ideas.

Sensitive and articulate, Mucciolo tells L.A. Weekly her story near a courtyard fountain behind MOCA, where passers by often interrupt the conversation with compliments about her distinctive technicolored radiance. Her style consists of rainbow bright clothing and hip-length, multi-colored braided hair. She’s like a living, breathing cartoon character and calls “Tasselfairy” her super hero name; her alter ego emerged after her 2017 creation of Cloudland — a livable canvas made of her 650-square foot downtown L.A. apartment. Cloudland’s rooms are painted in rainbow colors and decorated with her own self-created tassel garlands. There’s a wall covered in handmade silk flowers, an abundance of glitter, origami and sprinkled homages to childhood icons Hello Kitty, My Little Pony and the Care Bears. Her unique YouTube home tour video has garnered 1.2 million views since it was first posted in May 2017.

A native of Rancho Cucamonga, Mucciolo explains that while nature, rainbows and wild animals inspire her most, so does nostalgia. “I’m 36, so I take references from my childhood, the ’80s and ’90s. I associate all those colors with happiness,” she enthuses.  “I also take my own experiences as a human and a black woman… I share things because I felt like I had to hide to be accepted by others. Once I figured out that’s all a lie. I decided that I was going to do everything to share that.” 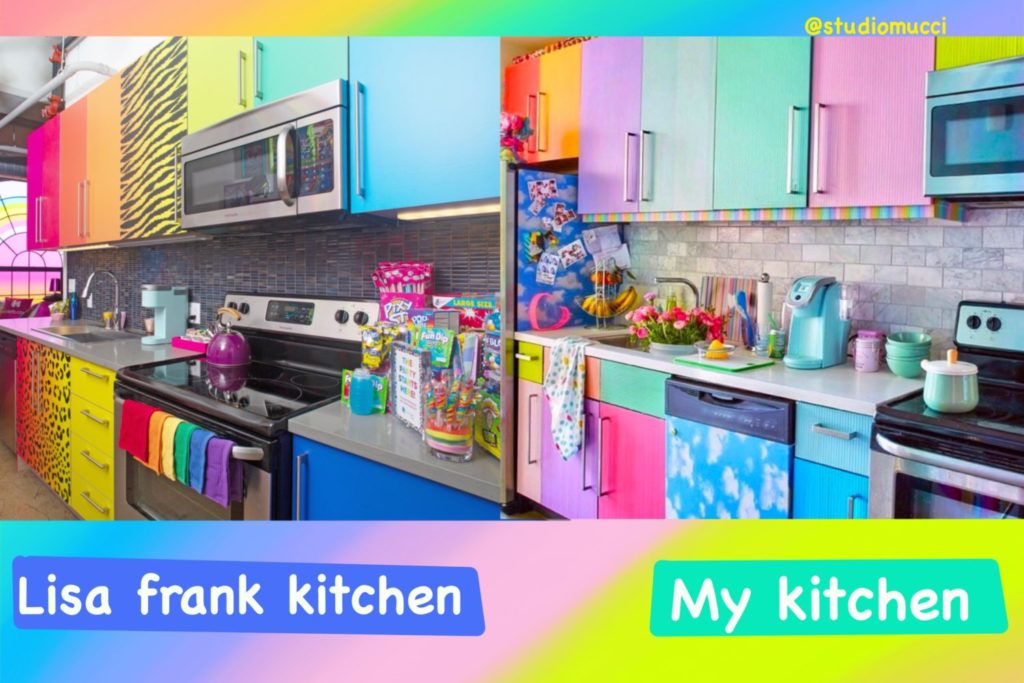 Mucciolo was greatly flattered when one of her childhood art heroes, Lisa Frank, became one of her 259,000 followers on Instagram, where she openly shares her Tasselfairy creations and interior design photos of Cloudland.

Frank, a Tucson, Arizona-based artist who got her start in 1979, was prolific in the 1980s and 1990s and known for her brightly colored children’s and school products, from Trapper Keeper folders to toys, accessories, lunch boxes and stickers.

Frank’s products were ubiquitous for middle-school aged girls of that era, including Mucciolo, and in some ways they still are.

The Lisa Frank Instagram account soon began publicly writing compliments and sending private messages to the vibrant designer. “It does feel validating when someone you’ve grown up with thinks you’re cool and thinks you inspire people,” Mucciolo explains, tears filling her big brown eyes, lids glistening with purple glitter shadow. “A lot of other brands that I grew up with, I’ve collaborated with. I modeled for one of Care Bears first plus-size collections, same with Hello Kitty. I’ve modeled for Betsey Johnson… Sanrio — we’ve worked together for a long time now. Nickelodeon, Disney… all of these brands that I love.”

When friends and fans began notifying Mucciolo in mid-October that Hotels.com was advertising a special two-week pop-up room — The Lisa Frank Suite — she was dismayed to discover that it was virtually a replica of Cloudland. But there was more. The copycat room would be located in a sister building directly across the street from her own residence! Owned by the same management company as her building (called Capital Foresight) this was, in her mind, no coincidence. The hotel room, listed at $199 per night ($332.65 with taxes and fees) sold out its entire 2-week run in less than an hour’s time. Four days later, Mucciolo got the courage to email the Lisa Frank company to inquire about the coincidence. They didn’t respond but did immediately erase all of Lisa Frank’s public Instagram complements to the artist. She was thankful that she had taken screen shots. “It broke my heart, because I’m kind of naive. I trust everyone,” she says. “I struggle to talk about this because I’ve dedicated my platform to talking about positive things… It was kind of like a knife to the heart and to the back.”

“People see my art and they see how I’ve decorated the house,” she continues. …So happy and colorful and everything so vibrant, but that comes from pain.” Tasselfairy is whimsical and fun but her creator reveals that she’s grappled with depression, fighting bulimia and a near attempt at suicide that led her to seek joy through creating her artful interiors. “It all comes from struggling and working really hard to stay alive. So when someone steals that, it’s devastating, because they don’t know what I’ve been through to do it.” To add insult to injury, Mucciolo, who has lived for the last three years at Cloudland with her husband and creative partner, Salvatore Mucciolo, was concurrently served eviction papers from her building’s management company during the Lisa Frank fight. She has now reached an agreement to leave by January 15, 2020, and on the advice of lawyers declined to discuss that part of her story for this article.

A GoFundMe fundraiser set up to help the couple is just a few thousand dollars short of its goal of $20,000. “Thanks to the help and support of the amazing people in my community, we’re going to be able to move. I asked for help and I was lifted up,” she says, tears flowing down her cheeks. “I just feel grateful and I want to keep being the person that people believe in.” Frank’s pop-up might be gone and the Hotels.com hullabaloo over, but their actions have taught the Tasselfairy a hard lesson she’ll not soon forget. “This is not just about me. It’s about how we deal with things like this in this world,” she says. “Are we going to let them keep happening or are we going to talk about them? The only way we can change things is to talk about them.”

Clearly, this superhero has found a new power in opening up (see her Instagram and You Tube channel for posts and video that chronicle this not-so-enchanting fairy tale). Happy ending or not, Mucciolo is ready to move past the dark clouds, and create more rainbows in the process. Check out Tasselfairy and Cloudland on Twitter, Instagram, Facebook and YouTube.

L.A. Weekly reached out to Lisa Frank on multiple occasions for their side of this story. We received one response from her rep, Courtney Tunney at Management 360, who indicated she’d get back with us, but after following up again we received no reply.
Editor’s Note: The article has been updated to correct the misspelling of the artist’s name.