Alexandra Grant: The Lover Whose Art Connects the World

Intelligent and gentle, artist Alexandra Grant sees with exceptional clarity. She sees you, she sees me and she sees herself. Holding that inclusive space, her work in paintings, photography, sculpture, installations, and publishing serves as a great connector, joining ideas of equality, the feminine and a bigger thread of consciousness that unites us all.

Grant’s mother is from Northern California and grew up in Mexico and Colombia, while her father is from Edinburgh. Most of Grant’s childhood was spent in Mexico City, but she also lived in Paris, Washington D.C., and Ohio, where her parents were both teachers. Her nomadic lifestyle made her into a true global citizen. Working from this expansive external knowledge, her love for reading nurtured her interior life, giving way to a multifaceted art practice that decodes, inform and inspires.

“I know that my aesthetic was deeply influenced by the Scottish anthroposophist side,” Grant tells the Weekly. “And the Mexican childhood in a way, [the] color and fearlessness about it. When I returned to live in the U.S. as a teenager, I understood inherently that my world inside was much more colorful than the world outside, and this is my place.”

Considering questions like “What do I care about when no one is there?” Grant accessed a persistent view of making work in relationship to writing practices. Her 2008 Love House project facing the Watts Towers invited this relationship of exchange into the community, through image, design and social practice. Further investigating reading as a form of seeing, she began painting words backwards, collaborating with author Michael Joyce.

“The goal for me was not to make the audience uncomfortable nor was it to make them labor. But it was to put people in a position that they were encountering something that was both similar and foreign at the same time and left them to their own curiosity,” she explains. In the series “Bodies,” made with Joyce, she incorporated mirrored lines of text and this has continued in her work.

“What I wanted my paintings to do is create that feeling like you’re not going to be able to read the language. You’re going to understand that there’s a system of language, that there’s a narrative in a certain emotional or intellectual tone, but you’re going to make sense of it using other parts of the mind.”

Engaging radical French philosopher Hélène Cixous over her book Philippines, Grant created a site-specific installation with 18th Street Arts Center in 2013. Forêt Intérieure/Interior Forest was an open collaboration with public drawing sessions. Experimenting with artist-writer transference a step further, Grant publishes collaborative books on her X Artists’ Books imprint, co-owned with partner Keanu Reeves. One of their first titles, The Artist’s Prison, features images by artist Eve Wood, while Grant tells a story set in a future world where creativity is a crime.

Large-scale mixed media paintings and new neon sculptural works (the latter on view at Lowell Ryan Projects in West Adams through December 21) interchange the myth of Antigone with abstraction. Declaring the powerful stance in mirrored text, “I was born to love not to hate,” Grant inspires the audience to query “Who am I?” while deliberately opening up a larger conversation about how to be in the world, as an artist and as a woman. 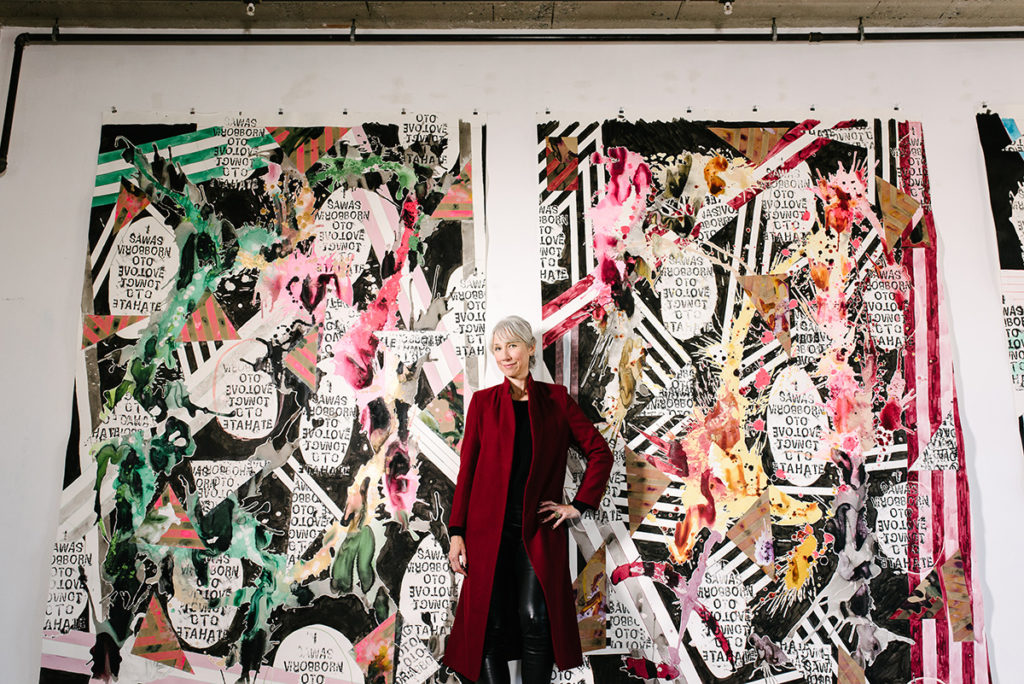