Shirin Neshat in the Land of Enchantment

In emotionally charged work, Neshat proves the personal is universal

On the eve of the largest and most comprehensive survey of her 30-year career, photographer and filmmaker Shirin Neshat admits to surprising herself. From her landmark “Women of Allah” — calligraphy-filled portraits of veiled, armed, starkly elegant figures made in the 1990s — to the two-part, nearly feature-length film Land of Dreams completed just this past June, this is not only the first time audiences will access something like the totality of her career — but also the first time the artist will.

“Looking at this all together for the first time, I’m learning some habits of mine — tendencies that I never realized I had,” Neshat tells the Weekly. “I’m always on the outside looking in onto different cultures, but it’s also very personal work. I realized how my characters really embody who I am, and all the things that you are only are able to detect when you really have an opportunity like this. You know, I’ve never seen all the ‘Women of Allah’ together! They’ve always been shown separately.” And there is also a series of early portraits of women taken in a garden setting on a trip to Iran, which have never been shown before — and not only because they were nearly confiscated. “Nobody was interested,” she says, “because they didn’t have calligraphy!” But now, all these years later, she revisits them and they take their place in the timelines of this beautifully organized installation tracing her most impactful series. 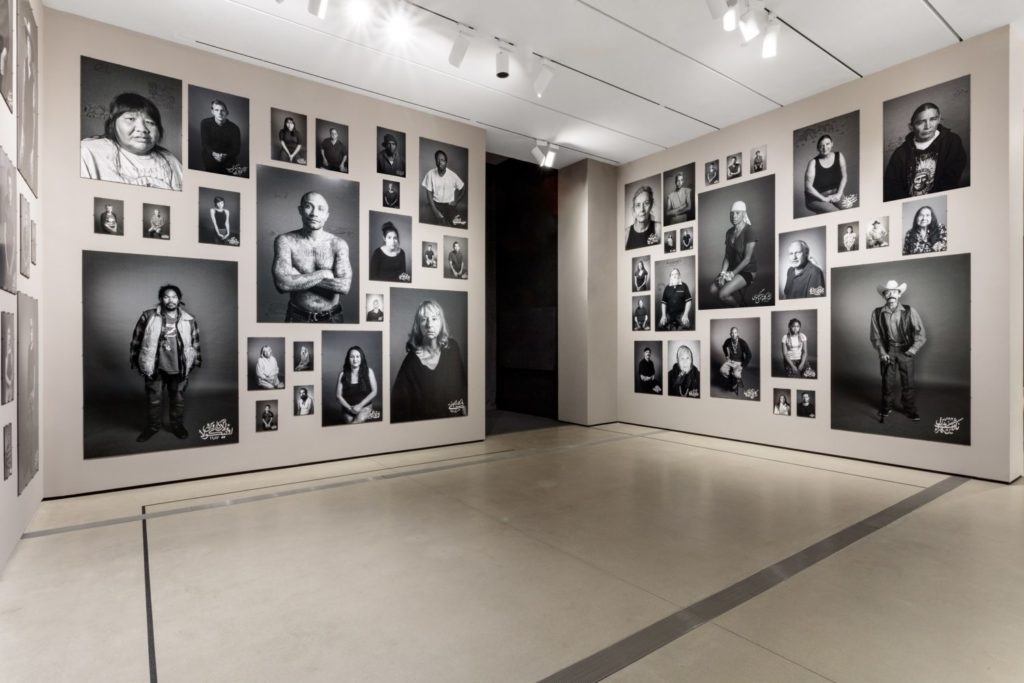 Installation view of “Shirin Neshat: I Will Greet the Sun Again” at The Broad, Photo: Joshua White / JWPictures.com

Those early photographs, and contemporaneous video works like “Rapture” and “Passage,” are what put Neshat on the art world map, not least because of their irresistibly striking black-and-white aesthetic of dreamlike symbolism and poetic language, exotic soundtracks, fraught and romantic landscapes and architecture, and the seductive physical duality of her signature two-channel format. The performative quality of the hand-written calligraphy, and the energy of drama and ritual that permeates all her work, is augmented by her life story as a high-profile exile from her native Iran, at a time in geopolitical history where her dichotomous cultural milieu as both an Iranian and an American immigrant is profoundly salient.

And that’s where Land of Dreams, the newest work in the survey, picks up the thread for Neshat, and why it’s such a big deal that it’s the first work she’s produced in America. The story follows a young woman who under the pretext of an art school project, convinces strangers in a remote New Mexico town to be photographed and tell her their dreams. In the second part, we discover that the young woman is actually an Iranian spy, whose mission is to collect subconscious dossiers which are later sorted, analyzed and judged in a Kafka–esque factory hidden inside a sacred mountain in the New Mexico desert. Shirin Neshat, still from Land of Dreams (The Colony), 2019 (Courtesy of the artist and the Broad)

“You know, I think that  for the longest time I never felt prepared to make a work in America or about America,” she says. “I’m an outsider, even though I have lived here longer than in my own country. I always felt that I needed to go to Morocco, Egypt, somewhere Arabic, to make work about Iran. And then I thought well, I know this country the longest, and I don’t even know Egypt or Morocco as well as America. I am at a point where I don’t have to create a narrative that is an Arabic perspective, but instead from my experience as an immigrant.”

And why New Mexico? In addition to an abiding interest in the legacy of great American landscape photographers like Ansel Adams and Robert Frank, she explains, “The desert landscape is something that I always associate with Iran. So I knew that the film had to be made in Arizona, New Mexico, Utah or Nevada. And so we drove across the country literally location scouting and when we arrived in New Mexico and went through the Navajo Nation and arrived at Shiprock I said, this has to be it.” As with the iconic architecture that is often featured in her previous work, that mountain spoke to her, she says, “like a character in the story.” Actually, the main character of the film, Simrin the art student/spy, is not only based on Neshat, but re-enacts in the story the process of the film’s actual foundation — Neshat driving around a strange New Mexico town with a camera, knocking on doors and asking to come in. Four of those source encounters are dramatized in the movie, but the other 200 form the material contents for the colony’s spying business. This work is one of the more overt expressions of the autobiographical armature of Neshat’s work, which does frequently include self-portraiture as well. Asked about her methodology for navigating the porous borders of self and society, Neshat pauses before saying, “For me, ever since I became an artist, it’s been a sort of conversation with myself about what goes on inside of me emotionally and psychologically, my own anxieties my own fears, which is a lot and I’m a very anxious person. I have a lot of fears. I am very fragile, but also very tough at the same time. But I’m not interested in only autobiographical work, and I’m not interested in just making work about the world. I think that if I bring my own emotions and my own personal questions — my own issues in the world as a woman, as an Iranian, as an immigrant, as a human being — into the larger conversation, then the work can become universal.”

Neshat would not describe herself as a political person. But as to the context of her life and its intersection with geopolitical flashpoints, she embraces the power of her circumstance. “If it’s forced upon you, how can you not respond?” she says. “The issues I frame are very close to my experience, but it’s not about me. I too have been torn apart by revolution, but I am not a documentarian. These narratives fictionalize history as an artistic expression. I consider myself more as a poet than a reporter. I work in dreams, in surrealism and magic realism, across our common humanity. You know,” she says, “dreams are innocent, naked and truthful. That is what I love about them.”

Shirin Neshat: I Will Greet the Sun Again is on view at the Broad through February 16. thebroad.org/shirinneshat Installation view of “Shirin Neshat: I Will Greet the Sun Again” at The Broad, Photo: Joshua White / JWPictures.com