For the second year running, the California cannabis industry converged on the redwoods of Mendocino County to talk all things cannabis with leading industry minds and regulators at Meadowlands 2019.

Meadowlands is essentially pot industry summer camp. In a business that has quickly evolved from burying your money so the feds didn’t find it to suits, the event reconnects the world’s fastest growing industry with its roots in the hills of the Emerald Triangle. The weekend is hosted by San Francisco cannabis tech company Meadow at a retrofitted former boy scout camp called Camp Navarro located in an unincorporated community of the same name.

The event is basically the opposite of the five-track cannabis business conferences around the country where trustafarians hope to be the next CBD demigod. In contrast to those events where filler panelists are driven by sponsorships and PR teams in a fight to sit between real experts, every person that takes the stage at Meadowlands had been providing thoughtful input to this ever-growing market for years.

The weekend centered around the main stage, where the hot topics of the moment came up and various breakaway activities to make sure everyone was getting the most of their time in the redwoods with no cell service or wifi.

The Meadowlands panel that caught our attention most featured L.A.’s chief pot regulator, Cat Packer, joining her current and former counterparts from San Francisco and Sacramento. Capping off that lineup was Gov. Gavin Newsom’s senior cannabis advisor Nicole Elliot. Elliot preceded the main panel with a 10-minute take on where things were at in her first few months on the job in the new position.

Elliot said Newsom wants to solidify the future of the industry and the ecosystem, with the help of the industry leaders that were in the crowd “in creating equitable, balanced and therefore, sustainable system that serves our communities.” Elliot also noted in her recent travels to meet regulators and law enforcement across the state, the farmers she met with proved the highlight due to their honesty. 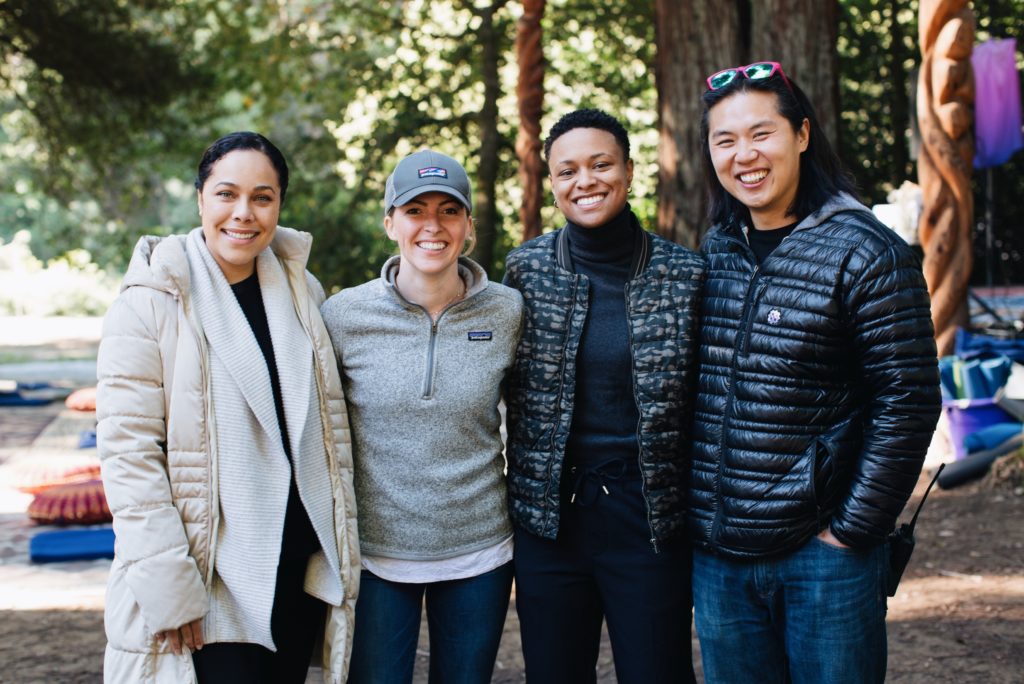 “And to no one’s surprise, I heard they were struggling,” Elliot told the crowd getting a bit choked up in the process, “I heard about the personal sacrifices they’re making for success. Tradeoff of time with family or with their local fire department volunteering for their community so they can meet the higher threshold of compliance. Like track and trace for example.”

Elliot noted the financial struggles of farmers hit with death by 1,000 cuts or coming to terms with the fact they likely won’t make as much money as they use to.

“One [farmer] called the state’s requirements extremely burdensome, and even predatory,” Elliot said.

In the end, she would call on those present to do their part in creating an industry with an equal playing field and equal access.

Cat Packer and her colleagues joined Elliot on stage. Packer was quick to note everyone on stage was a public servant, and they had traveled to the redwoods to be allies in the community’s efforts to build a responsible industry.

“In order for us to be effective public servants, we need to be able to hear from folks,” Packer told the crowd. “We need to know exactly what’s going on.”

Packer went on to say how far the participation of the industry in the legislative process goes.

“It’s one thing for us to take information and share it back with elected officials. But I think we need so much more for folks to be able to hear directly from stakeholders… It takes a collective effort in order to get things done,” she said.

Packer said she looks forward to making these things happen, but it won’t happen overnight.

Meadow compliance and community head Max Esdale asked the panel what would be the first thing they would do with an unlimited budget? Packer was quick to jump on the mic. “I would give everyone a license,” she told the crowd to loud applause. Packer next did her best Oprah impression with a “you get a license, you get a license” to equal fanfare.

She followed with, “Everyone would get licenses and nobody would get arrested,” and it produced arguably the loudest applause of the weekend.

Packer said the struggles that the industry has faced in the last year will never happen again. She said officials like her need to seize the opportunity regardless of whether they have the resources and staff.

“Last year was tough for everyone involved. But we have to learn from that. We have to come closer together,” she said. “There will be more resources that get put on the table. But how are we using those resources?”

Esdale asked the panel the biggest challenges everyone present was facing.

“Access [to licenship] is a big challenge. You don’t even get to other challenges if you don’t have access,” Packer replied.

She said even if you are in a municipality that has pathways to a license, there are so many places it can go wrong.

Packer believes that all starts with shared goals. “You can have all the resources you want, but if you have resources pulling in different directions you’re not going to make progress.”

“The state of the industry will be what we make it. And I think we have a huge opportunity to lay down the foundation for not only what we think this industry should look like, but I have a very strong feeling other industries are going to be borrowing concepts from what we’re doing and that’s an amazing opportunity,” Packer said.

Later on during the panel, Packer got into the predatory practices she’s seeing. She thinks some folks marketed legalization as a get-rich-quick opportunity and it’s been very misleading. She said that idea coupled with the realities of the new regulatory ecosystem in which businesses are operating makes her “think that’s really detrimental to a lot of folks.”

“I have real concerns because, and I’m sure this is happening throughout the state, that people are being taken advantage of,” she said, “People are being told they’re going to make a million dollars. Particularly around our equity program because we have programs what Identify individuals that meet certain criteria to give them priority.”

Packer is seeing people being asked to give away large stakes of their businesses just for help in submitting the application. Packer says it’s not fair, and we shouldn’t be seeing that kind of thing.

“We need to end that immediately,” she said, “That needs to be a message that reverberates out of this space and out into our local communities. Because I hate to see what was intended to be this progressive social justice initiative turn into the worst of capitalism.”

Esdale asked the panel how they saw the regulated market replacing the unregulated one. Packer believes it’s going to fill up a long time coming, and then it will all happen at once. She said L.A. spent all of 2018 and nearly six months this year working to bring the existing market into the regulatory framework.  She says even though L.A. has the most capacity for retail operations in the state, the city does have caps it will likely hit this year.

Meadow co-founder David Hua sat down with L.A. Weekly for an exclusive interview in the midst of his vision of industry summer camp. First and foremost, he noted on the scale of what’s happening.

“California is the fifth largest economy in the world. Often times I think it’s hard for us to embody that and imagine that scale,” Hua told L.A. Weekly. “We have NorCal and SoCal and each of these markets is so unique in terms of what they’re buying.”

Hua said NorCal has a more mature market in regulatory terms. But L.A. is still working on existing operators and they haven’t really created a path to operating for all the other pieces of the industry.

“So I think there is an intrinsic feeling from Southern California to come up and see what’s going on,” Hua said, “Then for Southern California, one of arguably the largest markets in the world, for us to have more transparency in what’s happening down there.”

We asked Hua If challenges have been presented to the company in dealing with the constantly changing world of Los Angeles cannabis law and other municipalities.

He went on to speak on the ability for California cannabis minds to meld in a way that’s different from so many where out of state money is coming in to try and buy a piece of the pie.

“If you want to opt into that, right? We have the opportunity of creating our own reality, our own culture, and how we show up,” Hua said.  “And at the end of the day, at a lot of those conferences that are happening, it’s networking, it’s building relationships. It’s trying to figure out a pathway to do business with one and other.”

What Hua loves about Meadowlands is everyone’s guard is down. No one’s pitching. They don’t have this need to get a business card right away. They’re not here to sell. If anything they’re here to observe, learn, share, participate and just get a broader picture of what’s going on.

“Just focus on [the] self a little bit more. Disconnect. Take an objective view of what’s happening in a good environment where people are hanging out. They’re consuming, they’re meditating. They’re sharing. It’s really cool,” he said.

We closed by asking Hua about some of the more dramatic news of the weekend, Phylos Bioscience founder Mowgli Holmes backing out a panel in the days leading up to Meadowlands.

Phylos is now embattled with the community over a video from a Benzinga conference where Holmes stated the Phylos’s Galaxy data would be used to contribute to their breeding program. A $20-million raise to get the first few phenotypes to market was why they were presenting at the conference.

Where it gets sketchy is Phylos told the growers that provided the genetic footprint for all their strains that data wouldn’t be used in any breeding programs. Basically, that the statements that Homes made at Benzinga and what he told farmers that got involved with Phylos early can’t coexist is a widely held belief with a lot of breeders caught in the storm.

“To be honest I haven’t really dove into the details, but I think there is a couple of things. I think that anytime you are at odds with your consumer base and you’re not aligned, there is going to be friction,” Hua said of the current controversy. “Anytime where there isn’t transparent communication about what’s happening and the motives. What’s happening with your data, your product, your genetics, there is going to be a problem.”

Hua said at some point with something as special as genetics, “where you’re talking about someone’s IP and livelihoods, they’re cuts and what they’ve done with them, it’s going to be a sensitive topic.”

One thing that bummed Hua out about Holmes’ no show was that he confirmed him so long before any of the drama started in late April. “We’re trying to bring in people that have perspective, and I feel like we lost a perspective here from someone that’s been very intimate in that specific sector of cannabis.”

“I also think there are people here that want answers, and what a great environment to do that. If you have an uncomfortable conversation in a comfortable environment, and you can work through things, or at least have a transparent perspective of what’s happening. I think it’s unfortunate. We have enough infighting on things and enough fires to put out to add more complexity to the situation.”