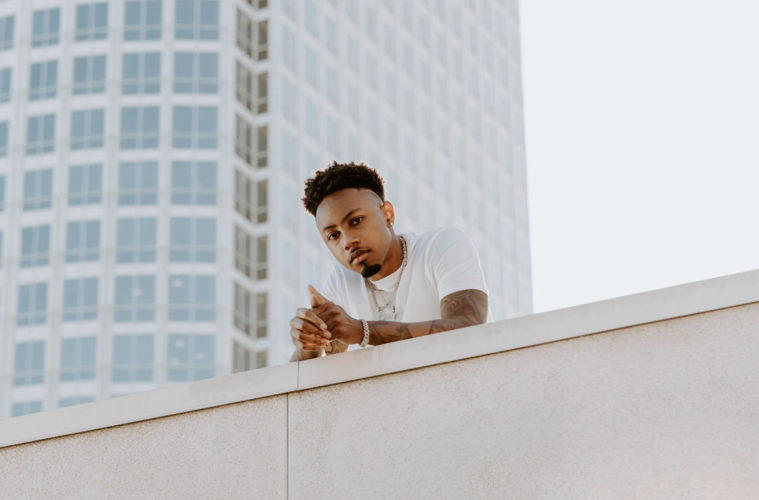 L.A. singer and rapper Kyle Banks Drops Uncommon EP: Relatively speaking, Los Angeles R&B/hip-hop artist Kyle Banks hasn’t been in the music game for very long, having got going around 2017-2018. But boy, has he made the most of that short period. His Green Light EP dropped in 2020 and saw him make a ton of friends, as the plaudits rolled in. That’s about to be followed by the new Uncommon EP. Most likely, he’s just going to keep rising.

“My first live gig went really well, and that’s when I started to lean more toward music,” he tells us, of his early days. “It was an accident. I did a song that was really good, but I had been playing basketball my entire life and I always thought I’d go back to basketball. It wasn’t until like 2019 when I did a song, and it started getting label attention and a lot more of a crowd. I started to get love, and I studied and understood the music. I really wanted to try this, and I really loved this.”

We think he made the right choice. Of his prospective basketball career, he told us that, “I can fend for myself. I wasn’t Kobe, but I was OK.” But his music is way better than OK.

“On Green Light I was going for an L.A. sound, or really trying to find a sound,” Banks says. “I feel like now, I’m more comfortable in my sound, which is more easy flowing. Writing comes much easier now. So I would say it’s maturity. The maturity and the growth which comes from being in the studio a lot more.”

The new Uncommon EP was written and recorded during COVID-19, and Banks says that the pandemic made its way into the lyrical content and themes of the project.

That Bino Rideaux collab is the excellent “On Me” track, and he also worked with the Bluebucksclan on “Bogus.”

“Shoutout to my man, Brandon,” Banks says. “He’s one of those guys – the people who have messed with him know he’s a cool guy. He works with another cool guy called Jay Shepp. He was able to connect the dots. He hit Shepp up, he sent the record to Shepp, and Shepp sent it to Bino. Then we connected after that. Same thing [with Bluebucksclan]. Shepp actually managed them as well, so it was all in the same loop.”

The latest single and video is “4U,” featuring K Camp.

“I was in Atlanta two or three years ago, and he was there,” Banks says. “He was talking with my manager, I guess. They sent him the track and he was cool with it, so we were able to work things out and we got a feature from K Camp. [The song is about] telling a girl you’re interested in, ‘I could be whatever you want me to be. I’m feeling you, I’m liking your vibe, so I could add that extra oomph to whatever you’ve got going on. We could be a great team.’”

Uncommon, as with all of Banks’ work, is out via Red Bull Records. The artist feels like this is a productive and comfortable home for his music.

“I think everything over there is genuine,” he says. “Everything is very hands-on. I talk to Deneia [F, who handles hip-hop and R&B at Red Bull Records] every day. Even my team. Every day, we’re trying to figure out the next step. There’s never empty space or time going by where we’re not talking. That’s what I like – I like everything to be hands-on and I like knowing the next step. So it’s very comfortable for me over there.”

Banks mentioned earlier that the pandemic affected the lyrics on Uncommon – naturally, it also affected the rollout and release. And not only negatively.

Another big part of his sound is the city that he calls home. That said, Banks doesn’t want to be pigeon-holed as an “L.A. rapper.”

“A lot of people from L.A. have the same West Coast bounce,” he says. “Not everybody, but the majority. I started listening to outside music. People like K Camp, from different coasts. As an artist, I feel like I want to be very versatile. I want to be able to do this, and do that. So even on the album I’m working on, I’m really focusing and trying to execute different melodies and different rhyming schemes.”

So that’s what we can look forward to in 2022 – a versatile artist getting his awesome new music out to the people.

“I want to be going on tour and get back on the road,” he says. “I want to drop more visuals, obviously. Just continue doing my part as far as executing and dropping great music.”