Keepin’ it 4Hunnid: A decade into what has already been an illustrious career, Los Angeles rapper YG is keeping as many irons in his white-hot fire as possible. The man born Keenon Dequan Ray Jackson released his fifth studio album, My Life 4Hunnid, last year. He has his YG OG cannabis brand and he’s just released his first sneaker, the Classic LX, via K-Swiss.

These are heady days for YG, and on top of all that he’s releasing music on his 4Hunnid label as he attempts to harness his secrets of success and pass them on.

“I really never had an older person giving me guidance,” YG told us by phone. “I had my homies and shit. We were all learning the game and the business at the same time. That was that. But as far as somebody older, I never had that. I had Jeezy in like 2013. He became that person, a big bro giving me advice and all that.”

Back in 2013, YG signed to Young Jeezy’s CTE World imprint, in time for the release of the debut My Krazy Life album. The rest is history, and it’s that sort of guidance he wants to offer the likes of Day Sulan and D3szn – two local rappers signed to 4Hunnid.

“I like trying to help people and get people where they’re going,” YG says. “I feel like the energy and the culture – we’ve got that – but we haven’t had any crazy success yet. That’s the goal. We’re working towards that every day.”

Both Day Sulan and D3 are in the early stages of promising careers. They’re both dropping tracks as fast as humanly possible (especially given the current locked down state of the world), as they seek to get a foothold. YG met D3 after being introduced to the freestyle videos he was posting on Instagram.

“One of my close friends discovered D3 on Instagram,” YG says. “He was posting videos and all of this. He took a liking to him, and sent it to me. I started listening to him and following him. We had a conversation like, ‘Yeah bro, we’ve got to sign him.’ We took the next step to do that.”

Meanwhile, he knew Sulan through her previous life as a dancer.

“Me and G were actually friends before I even started doing music,” Sulan says. “We ended up linking through my old manager. He ended up pulling the strings, connecting the dots, and saying this is a really dope west coast artist. G was into it and from there it’s history.” 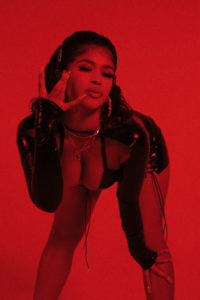 “Day Sulan worked at a strip club,” adds YG. “One of the most popular strip clubs out here – Crazy Girls in Hollywood. We’re from the same city and shit, so I knew who she was. One day she told me she did music. She ended up playing me some of her music, and it was cool. A month later, she sent me some new music, and it sounded like the shit. I was like, you’ve got potential. We were having conversations, and I basically told her, ‘Look, fuck with me.’ She was ready and that was that.”

D3 has had a storied life, falling into the gang life early on.

“I was in the hood,” he says. “I was a gang banger. I did my first song and everybody was messing with it, so I kept going and I kept doing little freestyles. I’ve been progressing since day one.”

As previously mentioned, Sulan was a dancer. She was also homeless for a period and, using her own word, lost.

“I didn’t start making music until I was 21,” she says. “I was really just young and trying to figure it out. Shortly after, I got put in a studio and that’s when I realized what I really wanted to do. From there, everything fell into place. The connection with G happened super quick, and not even a year later, maybe a year and a half later, I ended up getting signed because G was pulling strings. Everything just happened. Music came out of nowhere for me. I got in the studio and realized I could write, realized I was talented in some shit. So ok, this is what I’m going to pursue.”

Not every artist signed to 4Hunnid is from Los Angeles, though Sulan and D3 are. When it comes to signing artists to the label, YG is just looking for that ingredient X.

“I’m looking for somebody that’s got superstar potential as far as the swag, the look, and you should be able to work and your music has to be good,” he says. “You’ve got to have style and passion about what you’re trying to do and where you’re trying to get.”

Both Sulan and D3 describe their styles as versatile, with Sulan going a step further.

“I’m really an artist,” she says. “I make a lot of music, and I make enough music that eventually people will see that they can’t really put me in a box, even when it comes to straight rapping. I want everything to sound different, or have some kind of edge to it. I’m a real life artist.”

Homelessness, stripping, gang life – they are lifestyles that can leave scars. Sulan says that music is her therapy.

“If I go a long time without going to the studio, I literally start losing my mind because I need it,” she says. “That’s how I get out my emotions. I don’t know how to do it any other way. It’s my sanity.”

So now both are under YG’s wing, and Sulan says that he’s a very hands-on label boss. He’s no silent executive, sitting in the background waiting for product to release.

“Basically, it’s like a blueprint,” adds D3. “He’s been through messed up deals, so for us to have that guidance is a great thing. I couldn’t ask for anything better.”

With that in mind, YG helped by collaborating with both of them on the “Hit Em Up” single. A bona fide banger, the song utilizes all three individual talents effectively. D3 says it was a “dope experience.”

Similarly, YG and Sulan worked together again on the single “Bailar.”

“I made the song hella long ago, and then we finally decided to drop it,” Sulan says. “It’s really about finding that one person that you know makes things – be up front and be real blunt. Come and dance with me, don’t be shy.”

The video is appropriately provocative too. Sulan was happy to let the creative directors take over with that.

“I know I’m speaking Spanish in the song, so I really wanted it to pay homage to the Hispanic community, without it being any kind of culture appropriating or anything like that,” she says. “I am Black-Vietnamese, but I’m also Cuban. I wanted to make sure it had the whole aesthetic to it.” YG himself is still enjoying some of the glow from the My Life 4Hunnid album, though he was left frustrated when the pandemic meant that he couldn’t tour it.

“Life was shut down so we really couldn’t do nothing,” he says. “I was mad about that. I can’t promote the album, I can’t go on tour, we can’t do shows. My music is my lifestyle, so I put an album out and there was no lifestyle around it. I wasn’t happy about that.”

Still, it’s a solid body of work. In the eight years since his debut, he’s grown up but he’s still the same dude.

“I’m a little bit different and smarter,” he says. “Wiser. I’m more business savvy. Now I’m getting into different things – investments, and stock. All that type of shit. Everything else, me as a person and what I like to do, that’s the same since day one.”

We don’t know what the future holds, for any of us. But the 4Hunnid team has all of the pieces in place to make a good stab at further success in 2021 and beyond. They have the talent, and the drive. A bit of luck wouldn’t be sniffed at.

“Shit’s going to be slow as far as opening up on the west coast, but we’re going to continue working and putting together the dopest projects,” says YG. “We’re going to start in these clubs as soon as they open up, and then for me, I’m in the studio working. I’m working on music. I’ve got my brand shit – I just dropped my first sneaker through my 4Hunnid brand. I’ve got my cannabis line. We have the record label of course, and I’ve got some TV and film stuff I’m working on. I’m always working. When the world opens up, we’re going on tour for two years straight.”

D3 and Sulan, too, will continue working, and releasing music.

And that’s music to our ears.