It’s Time to Prep Your Pot Garden for Summer

With the season officially upon us — and a coronavirus lockdown keeping Californians at home — it’s time to start getting your cannabis garden ready for spring!

This is all going to sound like it’s cannabis-oriented, but a lot of these best practices we’ll be talking about will get your tomatoes popping off too. Whether it’s pot or veggies, getting your garden prepared for the growing season will lead to the best results come harvest time.

We reached out to the experts to get their take on how SoCal backyard gardeners could prepare for the rapidly approaching growing season. Brian Malin formulated the Vital Garden Supply nutrients many champions used on their way to podiums; this will be his 15th season getting farmers ready to make the most of their summer. Dark Heart Nursery founder Dan Grace’s curated genetics will be featured in numerous L.A. gardens this summer. Grace expects to move a million plants to backyard cultivators this season through Dark Heart’s retail partners.

Both Malin and Grace both immediately emphasized that when it comes to being a backyard farmer on top of 40 hours a week at your career, make sure you’re keeping it fun while using quality products. Malin believes the associated costs of growing organic pot aren’t going to be out of the economic reach of anyone who was planning on buying a decent nutrient program to get them through summer. “A simple once a week feeding during veg then twice a week in bloom is more than adequate.” Malin noted, “And that’s also very affordable. A very small amount of food and proper soil is the most important part I’d say.”

“A lot of people go into it thinking I need this, that and the other thing,” Grace told L.A. Weekly. “It’s important to remember cannabis is a weed, so to speak, and if all you got is 20 minutes to spend with it, then set it up so you only need to spend 20 minutes a week with it.”

If you don’t get your hands on the right genetics, a season’s worth of work can go out the window quickly. Even if you give bad genetics the best opportunity to succeed, there is only so much you can achieve. To aid consumers in their genetics quest, Dark Heart Nursery will have 35 strains that make up the million plants they’ll move through dispensaries. “It’s cool, right? We’re trying to normalize it,” Grace said of the massive plant count. “Californians voted for Prop. 64 four years ago now, and part of what we voted for was the right to grow in our backyard.”

Apart from making the nutrients champions use, many have gifted Malin elite genetics. Malin co-founded VitalGrown last year. The farm’s representation of 3rd Gen Family’s Zkittelz cut, one of the biggest strains of the last five years, was absolutely elite. His version of Symbiotic Genetics’ Cherry Punch, a strain that made the Emerald Cup podium in 2018, was simply stunning. The man is an expert at picking primo cue to go with his nutrient line. “If you want to get the best out of those six plants, do your research. There is so much information available now,” Malin said. He also recommends attempting to try things at the dispensary before you commit to growing them out as not to end up with a big pile of something that’s just not your thing. “See if it has properties that relate to what you go to cannabis for.”

Malin says the more energy you put into getting the right strains in your backyard, the less likely you are to end up with some boof.

If you want to get your hands on some Dark Heart clones this early in the season locally hit up Dr. Greenthumbs on Pasadena where weekly drops are happening. The Artist Tree in WeHo will be getting their first order this month and HHC Plus will also get their first drop of the season very soon.

Getting your spot ready

First, you’ll need to decide how big you want to go. Will you be using pots or planting in the ground? The bigger the pot, the bigger the plant. So for prying eyes and low fences, you may want to stick to something smaller.

If you plan on using the soil in your yard be sure to spice it back up to give your plants an extra kick. Vital’s inhouse soil builder line is an excellent first step for that process, but if you’re starting totally fresh it is worth investing in some solid soil you can make your own organic amendments to after.

“I always recommend an automatic watering system so if you forget it, no big deal,” Grace said, “You get home from work late or something, it’s a hot day out, you got your automatic dripper setup so you’re taken care of.”

But make sure that the spot you pick is getting enough sun!

What are people messing up?

The reason that location selection is important is that Grace tells us one of the most common errors he has seen over the years is people not selecting a location that provides the plant a proper light cycle through the season. Sometimes people will plant too early or plant in a part of the garden with a little bit of shade. Grace always recommends you wait until after May 1. “Ideally after mid-May if you’re planting clones,” he followed up.

One of the things Dark Heart is working on this year are cuts that are a bit more forgiving to folks who may be a little overzealous to get their plants in the ground. Especially with their new seedling lineup, which won’t start to flower until the right time of year since they need more time to develop than clones.

Malin replied he believes the most common mistake he sees from backyards cultivators is overwatering. “A lot of people just want to keep on watering their plants, but you don’t want to do that,” Malin said, “The roots can end up soggy, get root rot, and then plants don’t thrive. Once you get a wet, soggy soil or medium, it’s hard for your plants to pull out of that.”

How hard is it to do real permaculture at the backyard scale? Malin says he is always going to encourage people’s self sufficiency and it’s always worth the time. “If you have the ability and the time to make your own compost, make your own fish-based fertilizers, make your own work castings and all that, I highly recommend it,” he said.

While it can be harder in a smaller situation, there are definitely people doing it. Marin says he looks at Vital as the precursor to regenerative farming as people take the steps to develop the biodynamic ecosystem of their own properties.

“Or for the person who maybe doesn’t have the desire to be fully regenerative, but they still want to have a product that is organic, high grade, and clean. But they may have a job, they may have other things in their life that prevent them from finding nutritional value on their property,”

Ducks In A Row

Remember, we’re not telling you to go out and grab a clone today and toss it in your yard quite yet. We’re saying this is when you should start preparing if you want to do it well. 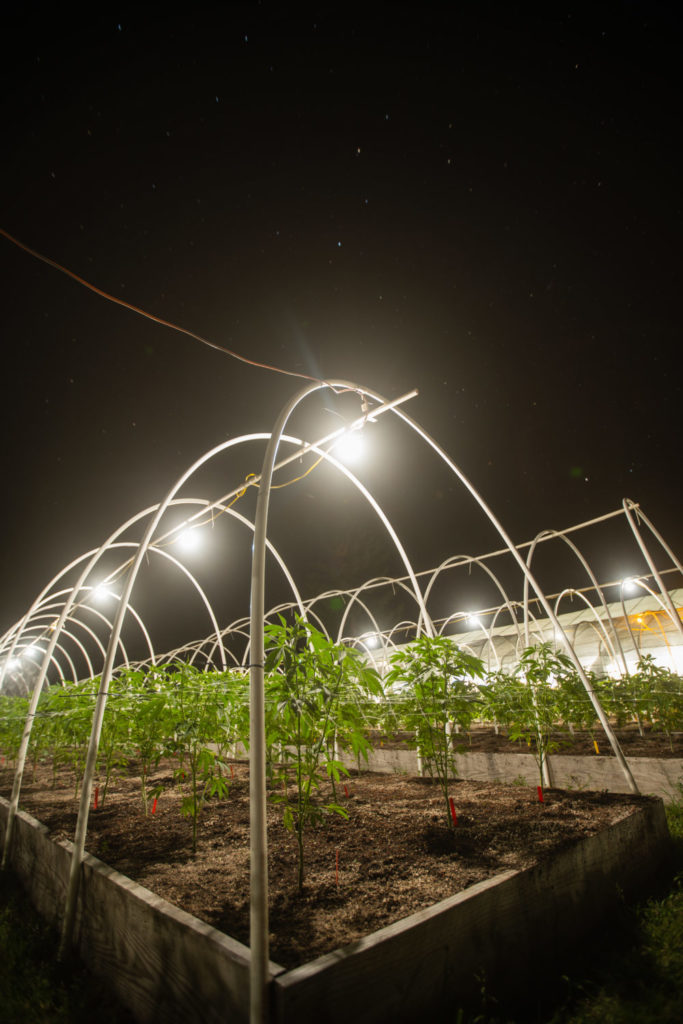 “Mother Nature is tricky, before you know it we’re going to have some cold,” Malin said. Our conversation moved to the fact the driest February on record had people on edge to start farming. “Well it could be the wettest March in history, or April, we’ll all forget about those nice warm February days we had,” Malin said with a laugh.