Frazetta’s cover paintings brought to life characters that had first appeared in pulp magazines and comic books from earlier in the century, including Edgar Rice Burroughs’s Tarzan of the Apes, Ray Bradbury’s murderous children, and, most enduringly, Robert E. Howard’s Conan the Barbarian.

The 14″ by 10″ page size and fine glossy print screens of J. David Spurlock’s Fantastic Paintings of Frazetta bring out details and brush flourishes lost on the smaller paperback and magazine layouts of yore. Born in Brooklyn, Frazetta (1928–2010) was a prodigy; at age eight he was already enrolled in a local art school and he came of age amid the brash and salacious imagery radiating from the pulps and comics overflowing Gotham’s newsstands.

Drilled in life drawing and classical painting, the youngster became skilled at making the phantasmagoric feel entirely plausible. Decades later, Frazetta’s paperback covers provided the template for Arnold Schwarzenegger’s look in the 1982 film Conan the Barbarian. Director and co-screenwriter John Milius lamented, “Not that I could ever redo Frazetta on film — he created a world and a mood that are impossible to simulate.”

Spurlock follows further Arnold threads in this vibrant tome. “Schwarzenegger owes more than his acting career to Frazetta as, without the success of the Frazetta-covered Conan books, there would have been no Conan movies, and it was while Schwarzenegger was in America in connection with the Conan film that he met Kennedy family member Maria Shriver. Her family’s deep roots in American politics opened doors for Schwarzenegger, who ultimately won the governorship of California [in 2003].” 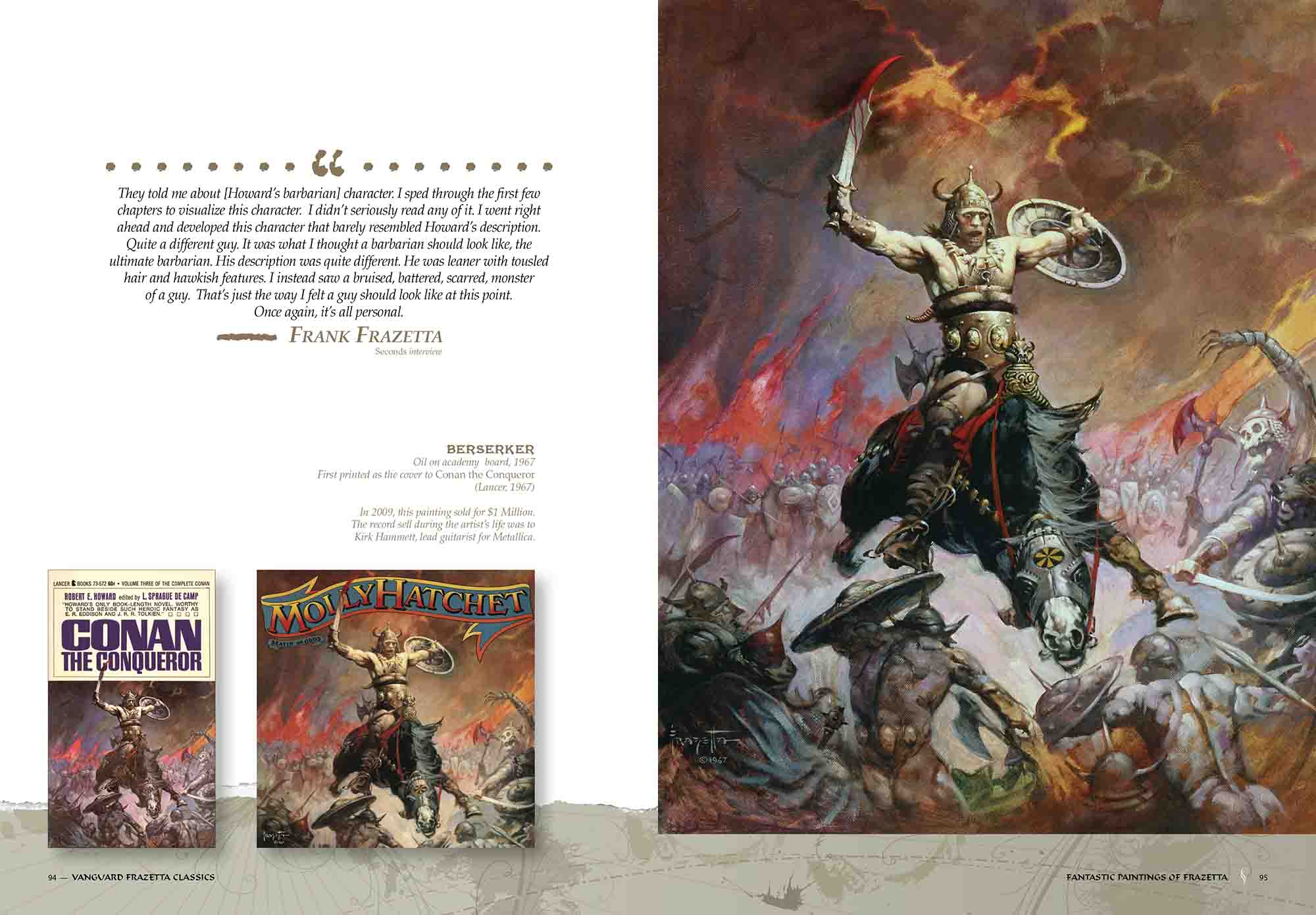 Frazetta possessed tough-guy good looks and used himself as a model in his early days, but he couldn’t match the beefy dynamism of his Conan character. Nor was he impressed with Schwarzenegger’s incarnation, telling interviewer Steve Ringgenberg in 1985 exactly what he thought of the Austrian bodybuilder’s portrayal of the barbarian reaver: “He’s a nice guy and I know he’s a Frazetta fan and all that, but he’s not a bruiser, he’s not a killer, right? Let’s face it.”

SR:“Where are you going to find someone who looks like your Conan?”

SR: You grew up in a pretty tough neighborhood.

But Frazetta didn’t just excel at visions of brawny brawlers. His sea witches and Egyptian queens and jungle tigresses were as supple and curvaceous as they were commanding and merciless. One of the pleasures of this book is layouts that pair Frazetta’s roughs with his finished illustrations. In the watercolor sketch for Woman with a Scythe, a nimbus of hair writhes like flame around the demoness’s skull; arms and a jutting knee are painted with the same slashing speed as smoke wisps in the background. In the final oil painting, the toned arches of a fashion model’s cheekbones have literally fleshed out bone and the hair has turned raven-black to clash less with a roaring fire behind her dragon familiar. Details of bracelets, bangles, and a coiling snake feminize her ensemble while also acting as bewitching armor. 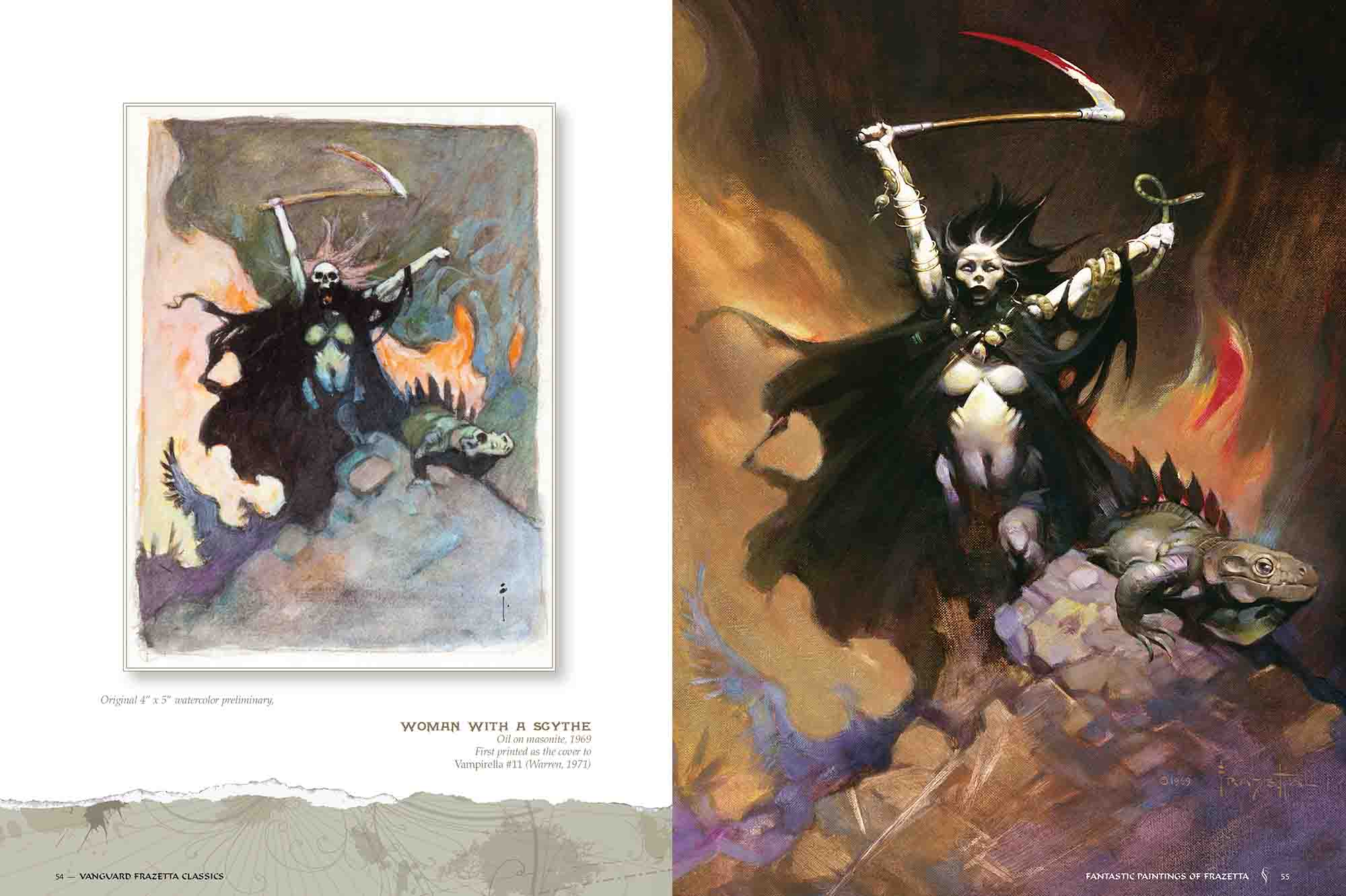 In 1969, Frazetta painted Egyptian Queen for the cover of Eerie #23, a black-and-white horror anthology put out by Warren Publishing, a magazine empire that featured some of the best figurative artists of the 20th century. (One house ad that ran in many Warren comics was a Frazetta-illustrated public service announcement, “Easy Way to a Tuff Surfboard!” The six panels spelled out a plan to attract Frazetta-style beach beauties: Quit smoking and instead spend your cigarette money on a custom surfboard — because, as we all know, “Smoking Doesn’t Pay!”)

Egyptian Queen not only enticed legions of teenage boys (and, going by the Letters columns, the occasional girl) to plunk down their 50¢, but 14 years later, Frazetta’s vision would also resonate in one of the biggest sci-fi epics of all time. In Fantastic Paintings of Frazetta, Spurlock quotes Aggie Guerard Rodgers, a costume designer for Star Wars: Return of the Jedi: “The Princess Leia bikini was inspired in part by the work of Frank Frazetta. Frazetta’s framing of the female form was done out of a love and respect for it. If you look at his works, you can see a distinct attention to detail when drawing all human bodies, especially when it came to naked or exposed muscles. His science fiction and fantasy artwork, along with his use of metal clothing, also has some clear inspirations on the costume.” One can speculate that among the untold thousands who first ogled the alluring queen on newsstands in the late ’60s, and the millions who saw her reimagined on the big screen, was one still-thunderstruck fan who grew up to be the anonymous winning bidder at a 2019 auction that saw Frazetta’s original 26″ by 20″ oil painting hammered down for $5.4 million.

As costumer Rodgers noted, Frazetta’s was less the “male gaze” than a “fantasist’s gaze,” which conjured women of overripe beauty who were not to be trifled with. Frazetta’s chiaroscuro lighting and ample bosoms recall the baroque dramas of Caravaggio and Rubens, and he was most at home in the realms of a distant, mysterious past. Covers he did for Warren’s Blazing Combat magazine lack atmosphere, as if he couldn’t connect with the accouterments of modern warfare — tanks, machine guns, fighter planes. 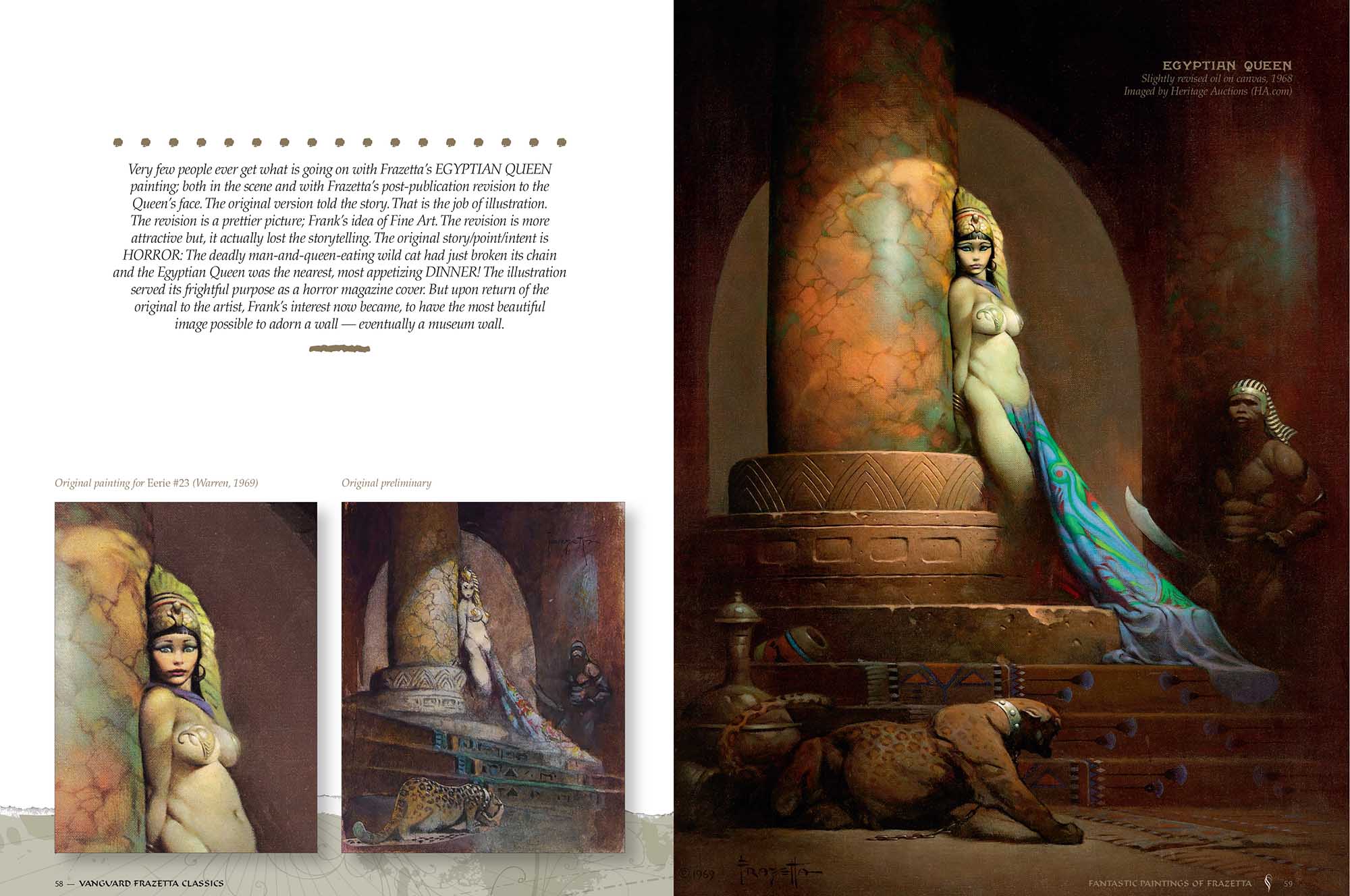 Frazetta’s impact on the sword and sorcery, sci-fi, and fantasy genres over the past six decades is undeniable. One can wonder as well if the influence of his lush visions, beaming from newsstands at a young Lisa Yuskavage, might have added something to the strange brew of her mature paintings, which distort the male gaze as if in a funhouse mirror.

But there can be no doubt that Frazetta, for good or ill, set the table for the voluptuous carnage of Game of Thrones. The hulking knights, lascivious witches, battered kings, strategizing queens, and dragon-riding usurpers were all cut from Frazetta’s otherworldly tapestries, but the show’s sometimes clunky CGI never surpassed the grace of his paintings. As John Milius intimated, when it comes to fantasy, it has long been Frazetta’s world, and the likes of an Arnold Schwarzenegger, a Jon Snow, or a Daenerys Targaryen only live — or die — in it.