At one point in the breathtaking new surf documentary from director Michael Oblowitz, board legend Nathan Fletcher drops from a helicopter into a 20-foot North Shore wave. It is a stunt that had not been previously attempted; it’s called an “acid drop” and is just as crazy as it sounds.

Fortunately for big-wave aficionados, Oblowitz and crew were on the scene, and this segment is just one among a series of mythic moments in a film that has already garnered high praise and festival awards (including a fresh Best Film nod from the Surfer Awards in Hawaii), and now screens in Hollywood from December 20-26 at Arena Cinelounge. 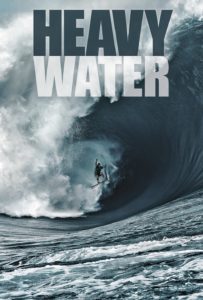 Directed by the man whom the legendary Ricky Grigg of the Scripps Institute of Oceanography once called, “the Shakespeare of Surfing,” Heavy Water follows big wave rider and surf dynasty scion Nathan Fletcher as he reflects on the history and contemplates the future of the artful sport he loves so much. Fletcher’s grandfather was a pioneer of surfing Oahu’s North Shore, and the story of his career — and those of Bruce Irons, Darrick Doerner, and Danny Fuller who also appear in the film — doubles as a poetic history of the regional culture and the global community.

“I take the storyteller’s responsibility seriously,” Oblowitz tells the Weekly. But at the same time, he also has an artistic vision of his own. “It’s like a painting,” he says. “It has an organic rhythm propelling it towards completion, but not at a precise, predictable moment. This makes my financiers and fellow producers very nervous! I miss a lot of deadlines — and then suddenly it’s done!”

In fact, both Oblowitz and Fletcher have art world roots as well, prompting painter, filmmaker, and surf maven Julian Schnabel to call the film, “the best surfing film I’ve ever seen — a profound insight into heart, mind and spirit of one of the greatest surfers of all time.” Director Kathryn Bigelow and photographer Bruce Weber have weighed in as well, calling it “wonderfully cinematic”  and “pure,” respectively. Come see why this week in Hollywood, or look for it on your favorite on-demand platform.