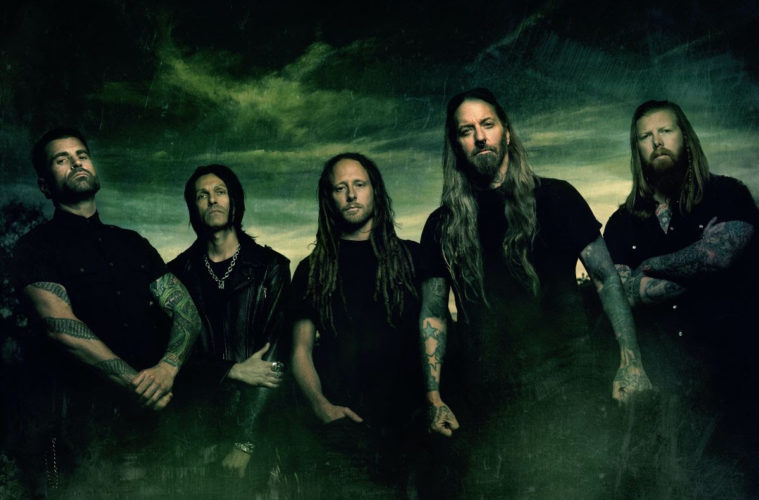 Based on the fact that the new DevilDriver album is called Dealing with Demons I, and that there’s a Part II due out in 2021, one has to assume that frontman Dez Fafara has a lot of demons to exorcise at present. The ongoing lockdown is showing no signs of safely reaching a conclusion and, with Fafara’s wife beating cancer last year, he’s not going to fuck around with a damned virus. On the other hand, Fafara says that he’s chronically agoraphobic and has been self-isolating for much of his life. So he has his demons, and he’s using these two albums to tackle them head-on.

“I don’t normally tell people what songs are about but this time I went personal,” the singer says. “Like this: I travel the world, I go on stage in front of 100,000 people at Download Festival, and yet I’m terribly agoraphobic. I’ve been socially distancing my whole life. I figured that was the first demon we should explore, and that was ‘Keep Away From Me.’ That song stayed 10 weeks at number one on an album-driven chart with a single, which was incredible. ‘Iona’ to me is about when we run home at night to watch CSI murder porn. When I ask you what your favorite horror movie is, you tell me Michael Myers Halloween or Chainsaw Massacre. I’m like, ‘Dude, they plainly put on a mask, kill and skin 15 to 20 women in those movies. Why are these your favorite movies?’ This is a dialog we need to be having.”

That’s a fascinating opinion considering the fact that there’s long been a large crossover of fans of metal music and horror movies. You’d have to assume that director and musician Rob Zombie (like Fafara, a vegan) disagrees. Many horror fans enjoy the idea of pushing the boundaries within the realms of fiction, safe in the knowledge that nobody is actually getting hurt. Fafara isn’t into it.

That’s the joy of this first part of Dealing with Demons – it’s so utterly personal. Not everyone is agoraphobic, but most of us can relate to the anxiety on some level. Meanwhile, we might not agree with his harsh assessment of contemporary horror, or we might agree entirely. Either way, the dialog is healthy. These are Fafara’s demons, and he’s dealing with them as he sees fit. Hence the double album that is staggered by a year or so.

“I wanted to release a double, staggered record,” he says. “I wanted to do the world twice and then come off for a year, year and a half which I haven’t done since the beginning of my career. Now, of course, I’ve been home for almost a year which is the longest I’ve ever been home. In my career I’ve done a lot of great things, but I’ve never done a double record. I knew it was biting off a lot. I tend to do that. I knew that if the first one fails, the second one is gonna fail too. So it’s kind of a dangerous thing to do. That in itself made me want to do it, which shows you a little bit of my personality.”

It makes sense to stagger the two parts of the beast, especially considering the fact that most people download or stream singles and EPs nowadays. A full album is a lot to swallow; a double album is ginormous. But based on Part I, it’s worth the effort. The personal nature of the lyrics has led to real growth in the groove-death-metal sound.

“I’ve only had one major lineup change in over 20 years,” Fafara says. “I think Trust No One was very much a DevilDriver record, meaning it was my first record with newer members and everybody’s writing for the brand. This is a different story. Before we started writing this record I said, ‘Listen – do not pay attention to what the label wants, what fans want, do not pay attention to the brand, do not think about previous records. If I just met you today and I had all my influences, you had all your influences, what would we do and what kind of music would we come up with?’ That’s where we’re at now with the sound. I didn’t want to be the band that’s been around 10, 20 years and makes the same record over and over.”

No danger of that. Fafara is committed to his band and its success, as he is to everything he tries his hand at (including his old band Coal Chamber). The man runs four companies including The Oracle Management, which has the likes of Cradle of Filth, Jinjer and Wednesday 13 within its ranks. He’s also managed to stay a step or two ahead of the curve.

“That keeps me busy,” he says. “We started Oracle Live, which is a pay-per-view streaming service. We started that in February because we saw this thing coming. We’re able to put money back into not only the artists’ hands but the crews, sound and light guys, and I make deals all over the country. The Whisky – no one else can use that except Oracle Live because we made a deal with them. We did the same all over the world. We run a merch company, and we’re getting ready to launch a film company very soon. I’m a guy who loves to build businesses.”

Fafara isn’t going to stop working, COVID be damned. This is a guy that will always find a way to make things work, and dealing with his demons is an important part of that journey.

DevilDriver’s Dealing with Demons I is out October 2.