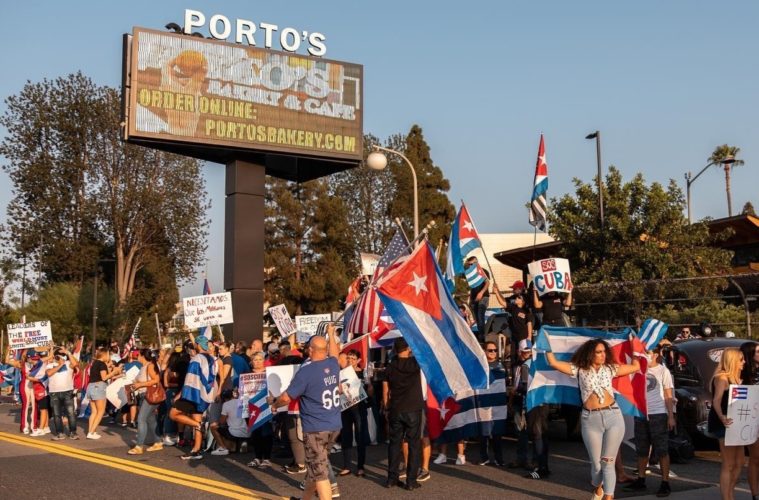 Cuban-Americans have rallied in support of anti-government protests in Cuba which have called for “freedom” from its current governmental regime.

With a massive July 11 protest now being dubbed “Dia de la rebeldia nacional” – which translates to the National Day of Rebellion – Cuban-Americans in Los Angeles marched in solidarity with the Cuban people, meeting at multiple Porto’s Bakery locations, as the restaurant chain is widely known for its Cuban origins.

Holding signs that read “S.O.S. Cuba” and chanting in Spanish, “If you will march in the streets, so will we,” the rallies called to bring attention to atrocities they say their families and friends are experiencing on the island.

“I came when I was 7. Just my mother and I,” said Jorge Perez, who attended a Cuban protest at the Porto’s in West Covina. “My whole family is back on the island and experiencing this first hand. When I visit it is not humane. My family has been dealing with this harsh way of living for years and there needs to be a change in the world. Everyone deserves to be free.” An online petition has gained steam in the Cuban-American community, with more than 45,000 people asking the U.S. to intervene in Cuba. Protests in Washington, D.C. have called for action with hundreds marching and chanting outside of the White House.

“My hope is that the U.S. actually does something, but I know that this is Cuba’s fight for freedom,” Perez added. “Cuban people have been robbed of their freedom and there needs to be an end to the dictatorship. Cuba doesn’t need support messages anymore, they [need] action.”

Another protest is scheduled this Friday, July 23, at the Porto’s Bakery in Glendale with a planned 5 p.m. meet-up and a 6 p.m. march.

“We need to unite and set our political differences aside,” Cubanos in L.A. wrote on the protest flyer. “We are here for one reason and that reason is freedom. We invite all nationalities to march with us.”

There will then be a noon “March for Freedom” Sunday at Club Cubano Del Valle San Gabriel in El Monte.

Cuban-American celebrities have also joined in L.A. protest, such as actor Jason Canela who has marched on the streets and actress Maria Canals-Barrera, who will be hosting a charity dinner in Studio City, with proceeds going to “vulnerable seniors throughout Cuba.”

Minor edits were made to quotes in this story for clarity.