To celebrate the landing of NASA’s Perseverance Rover on Mars and to honor employees of the Jet Propulsion Laboratory and NASA field center in La Cañada, who had personally assisted with the landing of the rover, California Pizza Kitchen has created a Mars-inspired pizza for a limited-time only at its Pasadena location.  The rover took its first test drive on the red planet Thursday.

The pizza will be available for the public to purchase for $5.00 from CPK’s Mobile Kitchen food truck outside of the Pasadena location on March 8 and March 10 from 11 a.m. – 2 p.m. Brian Sullivan, Senior Vice President of Culinary Innovation, gave L.A. Weekly an exclusive sneak peek at their Red Planet Pizza in the company’s Redondo Beach test kitchen in this video. There’s no mozzarella on this one, but it does look and taste out of this world.

Resembling the cratered Mars landscape, the base is a creamy combination of herbs and goat cheese, topped with a spicy marinara sauce with roasted garlic and fresh basil. The crowning glory is pepperoni and fresh sliced Fresno chilis on a paper thin crust.

“We are so proud of what the folks of JPL have done for our community in Pasadena and we just want to celebrate their amazing accomplishments and what it means for the future,” Sullivan tells L.A. Weekly as he slides the Red Planet into the 550 degree oven. “We were inspired by their creativity and achievements.”

So why no mozzarella?

“It’s kind of counter intuitive not to have mozzarella cheese on a pepperoni pizza, but we were trying to create the look of Mars,” says Sullivan. “We wanted a cheese element, and the creamy goat cheese base does that. Even though Mars is a cold planet, it looks fiery hot and both the pepperoni and chilis add to the crater effect. The mozz would have just covered that and looked like a regular pepperoni pizza.” 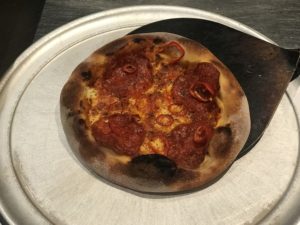 While the Red Planet Pizza is only available Monday and Wednesday, it might just be on the secret menu at CPK locations when the company that introduced barbeque chicken pizza to the world rolls out a new spring menu in May. There will be a new line of California focaccias combining hot and cold elements together like the spicy honey bee – focaccia baked in house, topped with capicola ham and gorgonzola cheese drizzled with spicy red chili honey.

Founded in 1985 by attorneys and USC classmates Rick Rosenfield and Larry Flax in Beverly Hills, CPK celebrates 36 years this month and has managed to stay open throughout the pandemic.

As for future expansion plans, Sullivan says that with any luck, CPK will be the first pizza joint on Mars.