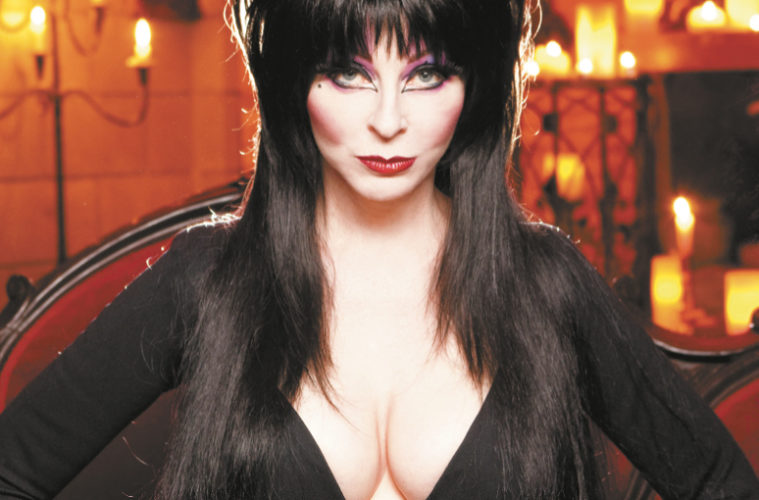 Elvira Mistress of the Dark has been enchanting her fans for decades. Four fiendish ones to be exact. Cassandra Peterson, the actress who plays the gorgeously ghoulish movie hostess just had her 70th birthday and while we can’t explain how she still looks so incredible (spells and rituals? virgin sacrifices? dances with the devil himself?) we can say that her enduring popularity has a lot to do with her work ethic, her sharp humor, her presence and her smart approach to her brand. Her official website has a vast and vampy array of cool product (we want it all!) and she obviously hasn’t lost her keen (cat) eye or gift for quips.

With a new  Shudder/AMC TV special and a brand new autobiography, Yours Cruelly- Memoirs of the Mistress of the Dark, getting tons of buzz, the babe in black is back and more bodacious than ever. In the book, she reveals a long-kept secret about her personal life too — that she’s been in a lesbian relationship for the last 19 years with her former trainer, a fact that she never shared until now. She’s always kept her love life private, though– she was also married to a man for over two decades prior, and rarely shared that. Boy, girl, goth, ghost- we all had a crush on the cleavage-baring creature she created back in 1981, didn’t we? She made the wise choice to keep Elvira and Cassandra separate a long time ago, allowing her singular image to haunt our dreams (and nightmares) for the past 40 years. And we still love her. Maybe more than ever.

Just in time for Halloween, the Movie Macabre maven returns to her red velvet couch to comment on a new slew of spooky movies for the Shudder special, which is available On Demand on the streaming network and American Movie Classic channel now. She’s also got a new partnership with Netflix, called “Netflix & Chills” in which she comments on the network’s Halloween slate via their social channels (use #Elvira, #DrElvira and #DoctorElvira and #NetflixandChills to search). We chatted with the queen of creepy commentary by phone from New York about her return to TV, the book and what’s next.

LA WEEKLY: Congrats on your new book and your new Shudder special Cassandra. You are always doing fiendish and fabulous things. I really enjoyed meeting you at Pinup Girl Boutique in Burbank when you debuted your clothing line a few years ago and happy to see you still scaring up cool projects. So nice to talk to you again. You live in Los Angeles right?

CASSANDRA PETERSON: I do live in L.A.! I’m just in New York right now doing press for the book. Well, LA Weekly readers love you. One of our most popular covers was actually yours back in 2010. So lets start with the milestone you’re celebrating right now- 40 years as Elvira! Can you believe it?

No I can’t believe it’s been 40 years. I mean when I got the gig as Elvira I never thought that I’d wake up one day and realize it’s been 40 years since doing the character. The Shudder special is titled the ’40th Anniversary’ to celebrate

So this is obviously a more superficial question, but a lot of us gals wanna know how you do it. I mean, you look so great! I know on the special you say you were “a baby” when you started as a horror host back in the ’80s, but you actually just celebrated your sexy 70s a couple weeks ago! So what’s your secret?

You know I wish I had a secret because I would bottle and sell it. Because you know I sell everything as Elvira. If I had some sort of potion I would definitely be marketing that sucker. But you know I don’t know what to attribute it to. I feel like it’s just enjoying my work, enjoying my life. Someone just said to me the other day if you really enjoy your work then it’s not work and it really is kinda like my hobby. It’s fun for me and I think when you have a job that you really love, it keeps you young.

I agree! I love what I do, especially since it allows me talk to people I admire like you. Maybe that is the secret.

Well you know that and a little filler.

(Giggles on both sides) I remember at the Pinup store thing we were talking about your clothing line being inspired by the iconic Elvira dress and we were discussing how you gotta work at it to stay in shape.

Oh yeah, I have done that believe me. You know exercise and watching what I eat. I mean I’ve had to stay in that same damn dress for 40 years so that’s how I know if I’ve eaten a little too much– if the dress is too tight, I need to watch it.

That’s great. Most of us have a pair of jeans for that. You have an iconic dress! Moving on to the book. Had you already completed it before the pandemic?

I had been thinking about it for 15 years and every once in a while I’d jot something down about my life, but then then the pandemic came along and I finally had time to turn it into a book with help from my friend Pamela.

Pamela Des Barres? Love her. And her book I’m With the Band is legendary at this point. I know you contributed a story about Elvis in her second book, Let’s Spend the Night Together, which was a great read. How did she have an impact on this book?

She made a huge difference. She was so so helpful. You know I had written screenplays before but never a book so I needed a lot of help and Pamela delivered with editing and finding me an agent. So I gotta ask about the big revelation everyone is talking about– your secret girlfriend!  It’s gotten a lot of headlines but I will say I’ve noticed the LGTBQ+ community is so excited and proud about it, feeling like you are such a good role model for living your truth and sharing it. So what have you noticed about the reaction to your relationship?

Well the people who’ve grown up with the Elvira character may be a bit shocked, they just don’t know what to think about it. But I have the most loyal fans and they love me no matter what I do. They are completely standing by me and I knew they would. The thing I was concerned about most was really, ‘oh will this company or that studio wanna hire me anymore for a commercial’ or other projects. So really I was just protecting my brand. You know Elvira is a straight horndog and to suddenly come out that the actor playing her was with a woman… I wasn’t sure. But you know I’m just really happy that 99% of comments and fans still love me. I hope it gives faith to other people hesitant about putting these sorts of things out there ’cause life is too short to be hating and keeping secrets.

Absolutely and the world is so much more loving and accepting in this day and age in terms of sexuality. Did that influence your decision to put it in your book?

Yes of course. You know there isn’t just ‘straight’ or ‘gay.’ There’s a thousand shades in between and I’ve had people say to me, ‘when did you know you were gay?’ I don’t know I’ve ever known I’m gay. All I know is I fell in love with a person who is very androgynous and happens to be a women. I didn’t plan it. I’ve never been attracted to women before but I don’t feel like, ‘oh gosh I suddenly turned gay.’ I just feel like I fell in love with a person and they happen to not be a man. I have no labels.

Love is fluid and I think people are starting to understand that more than ever. You sharing your experience really helps.  Let’s talk more about your Shudder/AMC special. Did you have any input in the films they were gonna show?

They gave me a list of films they had available and then we picked four of them. I said yes to these because they were all movies I absolutely love. I mean, the first was Mistress of the Dark and what’s not to love?  Then there was House on Haunted Hill, which is very special to me because it was the first horror movie I ever saw as a child and it changed my whole outlook, really rocked my world. The other two movies, The City of the Dead and Messiah of Evil were just so perfect for me. They picked one film from each of the four decades, which is really cool, so you’ve got the ’80s, ’70s, ’60s, and ’50s represented.

Just watched it. It’s great. Really exciting to hear your biting commentary on films. I think you should be hosting on a weekly basis again! But this special is a nice start.

Yeah it’s great and you know I have a co-host too: a skeleton!

Love it! So what’s next for you?

I have several shows coming up that I cannot talk about but after the book, I hope what’s next is a documentary deal, fingers crossed. Or a film version of it or even a Mistress of the Dark Broadway play or musical. It may take years, but I want these projects to happen.

Well I’m sure Elvira will keep bewitching fans for however long it takes, even if its another forty years. Thanks again for sharing (and scaring) us!