Six months ago, Lemeir Mitchell watched his dream come true on Melrose Avenue: the construction of his Happy Ice storefront. What started as frozen treat truck grew within months into an operation he describes as bigger than him. Having come to L.A. penniless from Philadelphia a scant year earlier, his signature rainbow-colored, water-based product soon had trucks parked on Melrose and stationed at Dodger Stadium and the Coliseum. It became a regular stop for celebrities like Angelina Jolie and her brood.  That dream turned into a nightmare a week ago.

“I was outside the store from 11 a.m. to 10 a.m. the next day during the riots,” the former tattoo artist and star of VH1’s Black Ink Crew: Compton tells L.A. Weekly in his  boarded up shop. “I was up through the night standing in front of the store to make sure that nobody would break our stuff or set something on fire. Not only was I protecting the Happy Ice store, I was also protecting my neighbors because we all are connected. If somebody  set their stores on fire, all our stuff goes out too. They were throwing fire on the roof — you can see that I still have the hose up there.”

While the Happy Ice store survived, it was a sad moment for the company whose mission is to help people create memories. Once the smoke settled, Mitchell and partner Ted Foxman sat down and reconsidered their June 20th opening date for the store. The duo has been working together since 2017 making beautiful music, amassing a fleet of trucks and plans for global expansion. “We signed our partnership on Valentine’s Day, but I started buying trucks and equipment three months earlier,” says Foxman. “I was taking a big leap of faith doing it, but I could just get from his energy that it was going to be OK. I’m used to being the minority partner, so I think we were made for each other.  He deserves to earn what he earns after putting his entire heart into this thing after taking the risks and making the sacrifices that he made .  For a 26-year-old kid to save up 75 grand and buy trucks and an ice machine and sleep on the floor of a tattoo shop for a year to do that — you’ve put in your time. I like being the guy who can be the support and help him achieve his vision. “

Despite a few setbacks — like trying to secure glass panels for inside the store of the 1930s building at a time where the demand for glass is through the roof and a shortage of other distributors — the team is forging ahead with the original grand opening. Mitchell says the community needs Happy Ice now more than ever.  There will be a limited time charcoal black ice available at opening, with all proceeds going to Black Lives Matter.

“It’s something to look forward to. Coronavirus is going on, people are stuck sitting in their homes and now this is happening. People have no good reason to go outside. It’s a time for unity and we want to make sure that people come with interracial friends. We want our opening to be a symbol of unity and a better future. Change is coming down.” 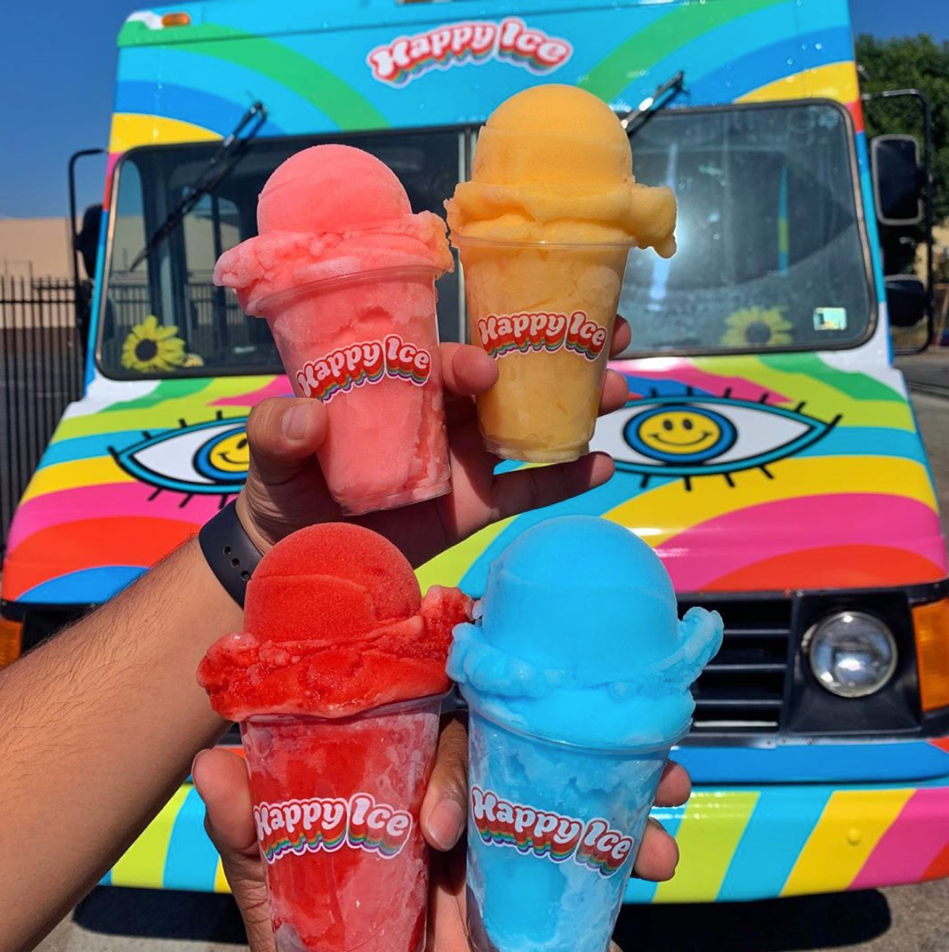 Mitchell credits change and solidarity with the survival of his shop as well as confronting looters face to face as the owner of a black-owned business in between handing out free Happy Ice to marching protesters.

“It did make a difference that we were a black-owned business to the looters,” he says. “Not just because I’m black. When I was standing outside, and they saw me standing for my company they knew that this guy isn’t just black he’s a hard working black guy. Some guy who hadn’t worked this hard wouldn’t be standing outside risking his life for a building. I was literally asking them ‘Hey, can y’all l please just leave my building alone?’ I worked so hard for this, please spread the word.  It looked like they all had a group leader, who would then shout it out to the rest of the group, and everybody backed off because they knew I was fighting for something.”

“I truly don’t support somebody smashing up businesses and it was so sad seeing everybody else going down.  When they came, this was already a plan. They came 50 people at a time. When they came to the corner, they knew who they were going to hit. They came specifically for the stores next to mine. If I would have stood in the way of that, I don’t think they would have had much care for me. But when they saw my passion and my pain, they said,  ‘You got it brother,’ and everybody just stepped back. It was just scary, seeing the rage in people. I know that a lot of the looters were not about George Floyd that ignited the anger to make them not care.  A lot of them were out here because of COVID-19 and haven’t had any income for the last three months. They’re at home with their families struggling too. I feel bad for small businesses, I feel bad for the looters, I really don’t know how to digest it all. There’s a lot of hungry people out here.” Forever hopeful, the Philly native has faith in himself and humanity as a whole and believes that racism can be unlearned.

“There are racist people in the world, but we all know you’re not born racist,” Mitchell says. “You learn that. I think people who are racist can change with the right support system. I came from very humble beginnings and have done some things that I’m not truly proud of because that was my environment at the time. This was all I knew when I grew up, getting money the wrong way. I accept that I used to be that way, but then I saw a different way, I saw an option — make new friends and find a new group of people to hang out with and remember there is always somebody more unfortunate than you.”

“I compare it to when people were afraid to come out as gay. This is just another moment. People at one point were scared to come out, they didn’t have any support. They all made new friends and developed a support system. They created their own new families and new groups. Right now we’re in that same stage.  It was the gay moment and now it’s the racist moment. There is support, and if you come on this side we are going to love you and can still be a family.”

Click here for an interactive map of black-owned restaurants in L.A. County.