Artwork by Sheree Hovsepian and Isabela Dos Santos in Together (YoungArts)

There are so many excellent artist talks, book releases, and arts-themed panels scheduled this week, it’s almost like a whole term at art school in one weekend. Plus a festival of new writing, soulful indie opera, video art, and a smattering of by-appointment gallery shows. And on Valentine’s Day, celebrate the freeloaders, parasites, and suckers. 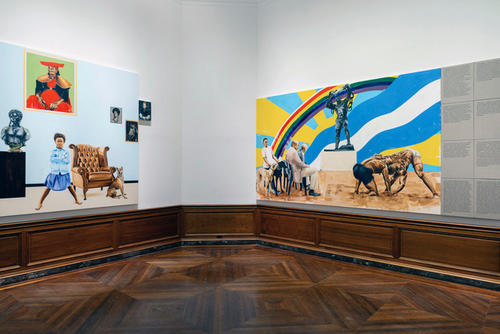 Artist Talk: Art Past Present with Meleko Mokgosi at the Wende Museum. Mokgosi is an Associate Professor at the Yale School of Art and co-director of the Interdisciplinary Art and Theory Program. His work includes large-scale paintings that explore themes of colonialism, democracy, nationalism, and life in Southern Africa. Mokgosi is hosted in conversation with artist Farrah Karapetian and the Wende’s chief curator Joes Segal. Thursday, February 11, noon; free; wendemuseum.org. Artist Talk: Fulton Leroy Washington at the Hammer. Fulton Leroy Washington (aka MR. WASH) joins Made in L.A. 2020 assistant curator of performance Ikechukwu Onyewuenyi in conversation. The pair will discuss MR. WASH’s painting practice — which has focused on portraits of public figures and individuals the artist met while incarcerated — and his participation in the Hammer’s current biennial. Thursday, February 11, 5pm; free; hammer.ucla.edu. Book Talk: Dan Hicks at the Fowler Museum. Dan Hicks, author, curator, and professor of Contemporary Archaeology at Oxford University, will present his recent publication, The Brutish Museums: The Benin Bronzes, Colonial Violence and Cultural Restitution, named by The New York Times one of the best art books of 2020. Hicks’ remarks will be followed by a panel discussion with Natasha Becker, Curator of African Art at the Fine Arts Museums of San Francisco; Marla C. Berns, Shirley & Ralph Shapiro Director of the Fowler Museum at UCLA; and Lauren Kroiz, Director of the Phoebe A. Hearst Museum of Anthropology at UC Berkeley. Friday, February 12, 10am; free; fowler.ucla.edu. Artist Talk: Joseph Martinez at the Bronx Documentary Center. Join the BDC for a conversation between photographer Joseph Rodríguez and writer Rubén Martínez, as they discuss Rodríguez’s powerful new book LAPD 1994, moderated by journalist Lauren Lee White. These photographs tell a story about the power imbalance between police and the community, the constant tension between the stated goal of “protecting and serving” and the reality of police violence. Most of those photographs have never seen the light of day, until now. The photos are a reminder that the same problems we are reckoning with today — systemic racism, violence against community members, corruption — have been around for decades. Friday, February 12, 3pm PT; free; bronxdoc.org. Theater: Francisco Reyes: Yorick, the story of Hamlet at REDCAT. Yorick, the story of Hamlet is an adaptation of Shakespeare’s Hamlet, structured according to its main soliloquies and narrated by Yorick, a character who in the original is represented by the iconic skull of the late court jester. Developed from a 2014 live theater version solely performed in small Chilean towns in ruins of buildings that had cultural significance, the current video version is a one-person show that also includes characters played by puppets. Friday, February 12, 5pm; Saturday, February 13 – Sunday, February 14, 3pm; $15; redcat.org. Petra Cortright: Predator Swamping at 1301pe. In order to maintain survival, some species hatch all at once. Floods of nascent turtles, crabs, or fish will overwhelm their predator by sheer volume. This oversaturation ensures that the breed will live on. In Predator Swamping, Cortright exhibits a new body of work, made during the precarious months of 2020, in which she exercises a similar survival instinct. Cortright continues to create paintings in Photoshop and prints them on Belgian linen. The paintings incorporate images of the High Desert, Bolivia, and Patagonia sourced from the internet which function as a base layer upon which she builds expanded landscapes. 1301pe; 6150 Wilshire Blvd., Mid-Wilshire; opening reception: Saturday, February 13, 11am-1pm; by appointment through March 27; free; 1301pe.com. Festival: 44th Annual UCR Writers Week. Entering its 44th year, UCR’s Writers Week is the longest-running free literary event in California and features the most renowned authors of our day alongside those at the start of promising careers. The week of events is open to the public and includes readings, conversations, panels, and social activities focused on the varied and exciting work of our participants, such as Jane Smiley, Mike Davis, Steve Erickson and Elizabeth Powell, and the brightest young voices coming out of the world-class UCR writing programs. Saturday, February 13; Tuesday-Friday, February 16-19; free; writersweek.ucr.edu. Molly Segal: Marrow Sucker at Luna Anais Gallery. Revealing hidden beauty in her dystopian visions, bones, thistles, and migrating birds punctuate landscapes depleted and scarred by industry and drought while other more abstracted figures in brighter hues explore the human psyche as it grapples with surrounding devastation. What is the Marrow Sucker? According to Segal “there is something both decadent and desperate about sucking the marrow. It’s squeezing every pleasure out of life while literally picking at bones, sucking them dry.” Luna Anais at Wönzimer Gallery, 621 S Olive St, dtla; reception with the artist: Sunday, February 14, 2-9pm; open by appointment through April 2; free; lunaanais.com. Discussion: Parasites at Nature for Creators. Commemorate Valentine’s Day with a live-streaming celebration of the world’s most intimate lovers: parasites. From the eyeball eaters to brainwashers and much more, this virtual tour will be led by biologist Dr. Rebecca R. Helm and moderated by artist Julie Johnson. Questions, interaction, and live draw-alongs are encouraged. Great for curious nature lovers, D&D DMs, natural history and concept artists, writers, and anyone looking for some wonder/horror inspiration. Sunday, February 14, 4pm; free; nature-for-creators. Art Pick: The Forest and The Sea at Five Car Garage. “If this landscape is dreaming, it must dream itself awake.” A group show featuring 17 L.A.-based artists and one poet to raise awareness and support the urgent call for action on climate change, in California and planet earth. Thinking globally but acting locally we are focussing on three local L.A. environmental non-profits TreePeople, Waterkeeper, and Habits of Waste who show us how to be good stewards with common sense suggestions and ideas for every household. Five Car Garage, Santa Monica address provided with rsvp; video works online, show viewable by appointment through March 6, free; emmagrayhq.com. Art by KAWS and Shepard Fairey in Together (YoungArts)

Video Art: Together at the National YoungArts Foundation. An innovative, creative fundraising campaign, Together is centered in a commissioned short film that unites the work of YoungArts alumni and notable guest artists such as KAWS, Shepard Fairey, Jose Parla, and Zoe Bruckner in an enchanting animated short centered on the motif of birds, underscoring powerful messages of freedom, solidarity and community. The animation is composed of 1,500 individual digital frames that are all also one-of-a-kind works of art available for sale. Streaming free at youngarts.org/together.

Art by José Parlá in Together (YoungArts) Art by Jean Shin in Together (YoungArts)