Game of Thrones’ Emmy wins ended its TV reign with a bang — actually a bounty of bangs — apropos for a show that never held back in terms of sexuality. While the popular HBO drama will be remembered for its powerful acting and thematic intensity depicting violent and fantastical storylines —  let’s be honest, the thing a lot of people will probably remember most will be seeing their favorite Game-rs getting it on. GOT, and really all of HBO’s best shows, proved that television that turns us on could still be smart, compelling and written well. This is something young millennials might take for granted, but Gen-X era and older viewers have had to adjust to. Before thoughtfully-produced TV was allowed to be as provocative, all we had in terms of titillation on cable was Red Shoe Diaries, Taxi Cab Confessions, Cathouse and soft-core Cinemax (“Skinemax”) shows, which were as bad and simplistic as porn itself.

Things were even worse on network TV, which will never be as sexy as cable or streaming service fare, though a few shows and characters from the past still come to mind (the ladies of Charlies Angels or Jack Tripper on Three’s Company, for example). Pre-TV ratings board guidelines  (TV-13, TV-MA, etc), the networks would actually broadcast viewer or parental “discretion advised” warnings sometimes in voiceover/sometimes in words across the screen (’70s shows like Soap and The Newlywed Game). But by the ’80s and ’90s, anything kinda went in terms of sexual situations, innuendo and jokes (Married… With Children, Golden Girls, Friends, Two & A Half Men and Seinfeld’s infamous “The Contest” episode). Still, actual sex scenes on network TV were and pretty much still are not-hot, consisting of strategically shot flashes of skin between sheets, badly-staged soap opera style “love-making,” or worse, reality shows featuring attention-whores we don’t care about awkwardly groping and sucking face.

For this lusty TV list, cable and streamed shows are tops (not bottoms) for obvious reasons. They have more freedom to explore seduction on screen and they take it, expressing the range of desire and sensual expression as primal, complex and unique as it truly can be for each and every one of us. Orange is the New Black (Netflix)

Orange is the New Black (Netflix)

The women in prison trope has long been driven by exploitive, male-fantasy, wherein hot n’ horny gals get to rubbing or humping since there are no penises around. In reality, incarcerated females are a lot more complex, developing bonds that go way beyond sex. But OITNB was still a very sexy show, both with its straight coital scenes in flashback and lesbian moments behind bars. The relationship between Piper (Taylor Schilling) and Alex (Laura Prepon) was particularly steamy at times, but even though the couple embodied the two-comely-gals cliche, they were anything but basic. The finale left their relationship in question but I think we all hope the pair ended up together living a lifetime of conjugal bliss. Hank Moody, the cocky writer/pothead/sex addict, at the center of this show, was pretty much a douchebag. But David Duchovny’s charisma made us root for him, even when he didn’t deserve it. His connection to his ex-wife and daughter humanized the guy — kinda. This one was a fun watch (for both men and women) because the show’s raunchy writing and depictions of pleasure were never just about its male stars.’ Cali’s girls were often the aggressors here, going for what they wanted (usually Hank) and getting it, multiple times if they so desired. 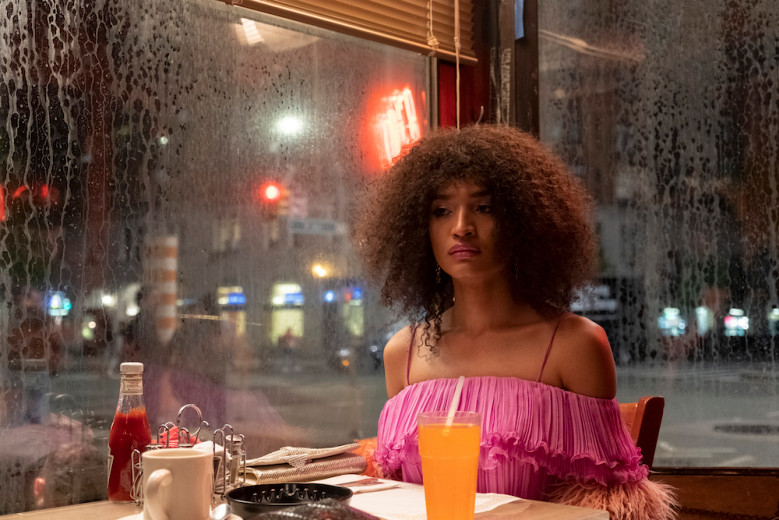 Ryan Murphy’s ground-breaking depiction of the New York Ballroom scene at its height is as daring as it is inclusive, with multi-dimensional characters that you can’t take your eyes off of. The frank and fabulous dialog and stellar performances (many from actual trans performers) make Pose the show the LGBTQ community needs right now, and even at its most risqué, it’s relatable. Queer didn’t just open the door for shows like Pose, it ballsily broke it off.  (Read our LGBTQ columnist Micheal Cooper’s piece about the show’s significance and planned reboot here). Also getting a reboot this year, The L Word was the gay female answer to QAF, and in many ways it was more accessible, even if its characters were just as conflicted. Though Jennifer Beals was the star, it was the escapades of the alluring and androgynous Shane (Katherine Sian Moennig) who many of us watched it for. And I don’t think I’m alone in admitting she made many of us straight gals question our preferences every time the show aired. Dealing with sexual arousal in a scientific way — chronicling the work of noted researchers William Masters and Virginia Johnson — didn’t make this Showtime offering feel staid or clinical. Quite the opposite — the chemistry between the pair was as complex and illuminating as the research they conducted and participated in. The flesh-on-flesh moments might have had a scientific purpose, but they were enticing too, especially for women (female sexual response was a focus in their studies). Greg Araki was never shy about showing kink, fetish or gay sex on screen in his films, and his millennial-driven TV series on Starz is no exception. As I noted in my April cover story about this vibrant and vampy show, it’s got “vaping, sexting, mate-swapping, three-ways, pee play, role play, rolling, trolling and tripping, webcams, online dating,  [and] public sex,” all played effervescently by former child stars, making for a satisfyingly timely romp. Thrones was never afraid to get freaky, and for many it crossed the line when it depicted rape and incest. HBO, which already pushed boundaries with The Sopranos, Hung, True Blood and more (see our Honorable Mentions below) seemed out to top itself with this brutal look at nobility and mysticism. Driven by wanton desire for power, and filled with wicked intentions, GOT ruled whether its characters were covered in armor on the battlefield or stripped naked (which was often) in the bedroom. Sex and the City (HBO)

Sex and the City (HBO)

Living on in heavily-edited repeats on the E! channel, HBO’s SATC comes off a bit dated today (an episode I caught recently had the voracious Samantha telling the girls about “the hot new trend” of grooming one’s pubes, something that’s ubiquitous these days thanks to porn). Carrie, Sam, Miranda and Charlotte all met dudes the old fashioned way with nary a mention of online dating (how most of us do it these days). Still, the sisterhood and the agency with which writer Carrie Bradshaw and her pals sought relationships and sometimes even no-strings satisfaction, was inspiring for many of us, as there was nothing else like it before on TV. SATC led to a backlash against sex shaming and a more open-minded and liberated view of female sexuality that continues to resonate today. And we’ll drink a Cosmo to that.