Time For Tea: Our Lady of the Kitchen

About a decade ago, local opera singer Craig Gilmore and his fiancé, artist David Crocker, paid $5,000 at a U.S. auction for 17th-century Flemish painting called Portrait of a Lady by Melchior Geldorp. They kept the beautiful work in their kitchen and considered it a prized piece in their art collection. But in 2016,  U.S. Homeland Security agents were at their door, informing them that the painting was one of tens of thousands of items looted by the Nazis in Poland during World War II. And now, the Polish government wanted it back.

Gilmore did his research and, sure enough, he confirmed the story was true. The couple happily agreed to give the painting up. During the two years of red tape it took for the two governments to make arrangements, Gilmore and Crocker learned that the LGBTQ community of Poland was marginalized and had very few rights. This made the couple even more eager to return the painting to the Polish people, representing themselves as both art enthusiasts and ambassadors for LGBTQ equality. But things were much worse for gay people in Poland than they imagined. When they flew there (at their own expense) for the repatriation ceremony last September, Poland’s Deputy Prime Minister Piotr Gliński only thanked Gilmore and not Crocker, who was sitting right beside him, in his speech. And while visiting, the couple saw political pamphlets that suggested LGBTQ people were a threat to children. In response, they distributed T-shirts and stickers reading “Share the Pride” and worked to raise funds for local organizations that supported LGBTQ and Jewish rights there.

When they returned to Poland in April they took things a step further, getting engaged in a public Warsaw park (neither same-sex marriages nor civil unions are legal in Poland). The gesture was about Crocker and Gilmore’s love, but it was also about making a statement.

To find out what happened next, we’ll all have to watch, Our Lady of the Kitchen, a documentary currently in production by Billy Clift, the Emmy-nominated filmmaker, best known for his documentary The Advocate Celebrates 50 Years: A Long Road to Freedom. Clift, a friend of Gilmore’s, was along for the ride, capturing the couple’s story as it developed here in L.A. and in Poland. Gilmore and Clift are friends, and the filmmaker felt inspired by what he’d been through, and wanted to share the couple’s message. The doc, produced by Gilmore and Crocker, will do this and more.

“I saw the story as hopeful and intriguing because it’s a mystery,” Clift says. “What was [the painting’s] journey? How did it get all the way to an auction house in New York City? So many questions.” The film should be complete sometime in 2020, and Clift is still following Gilmore and Crocker’s journey. “I want this film to be extremely elegant, showing off Craig and David’s home, their love of art and their extreme commitment to LGBTQI rights,” he adds.

Clift, whose dad is Jewish (Gilmore also has Jewish blood), sees many parallels between the painting’s story and what’s going on for the LGBTQ community in America today. “It tells us we can never give up fighting. Our last presidential election is the perfect example,” he explains. “We had become relaxed into what we all felt was our continued evolution, and we sadly must always be aware that there are people out there that fight with tooth and nail to keep us in a state of ignorance.”

Politicians in Poland are using the LGBTQ community there as a scapegoat, and Clift aims to explore the implications.  “Speaking with the Poles, they said that before the gays it was the immigrants, something we know that right now here in the U.S. is our president’s focus,” he says. “And that’s what Hitler did too! The Nazis are the extreme of… ethnic purity, that some people are better than others. Our government’s treatment of the people that are seeking refuge is not much better than the Nazis, and I’m sure it first started this simple. We must never forget.”

As a Jewish gay man myself, this story hits close to home, but it is important to everyone, on many levels. Gilmore and Crocker were not reimbursed for the money they spent on the painting and still fully cooperated with both our government and the Polish government to return it to its rightful home. They are true role models for the LGBTQ community. 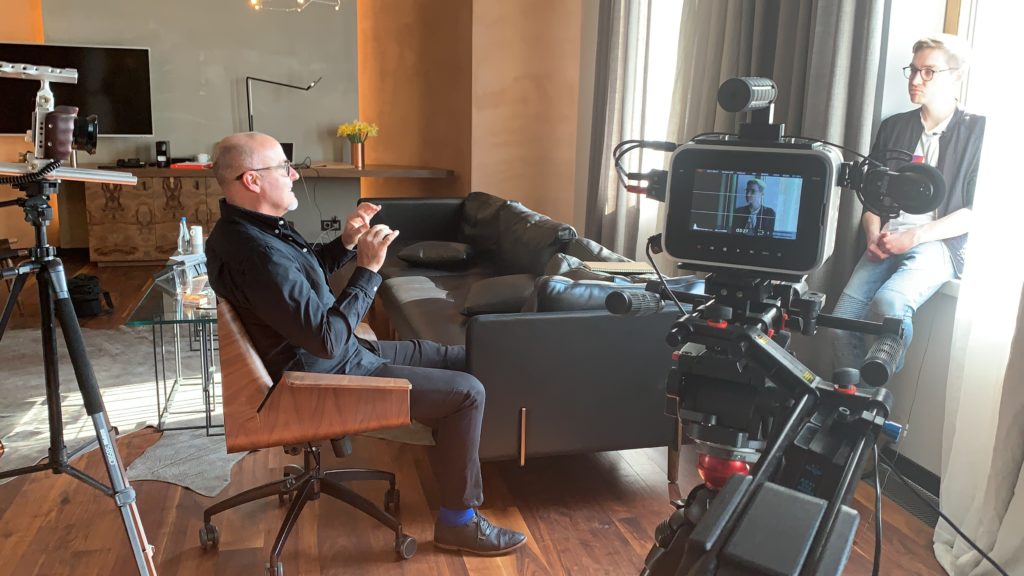 Filming “Our Lady of the Kitchen.” (Photo courtesy Billy Clift).

“Two gay men did the right thing… two men that, in the eyes of their government at this moment, are a main problem of their country! [They are] giving back out of respect for the country, the Jewish and the Polish people who suffered through a time unconceivable to us,” says Clift. “It shows many people that we are just people and we do good and caring things for humanity.”

Had it not been for the painting, the pair might not have known just how badly LGBTQ people were treated in Poland.  The Polish people are celebrating the return of artwork stolen by an authoritarian aggressor who used marginalized groups as scapegoats to achieve a homogeneous society. The current government of Poland is doing the same to the LGBTQ community today, not unlike the Trump administration (to both the LGBTQ community and wider population). Hopefully, Clift’s film will remind those of us who are marginalized today — be it trans people of color in the U.S. or the LGBTQ community of Poland — to not let the mistakes of the past repeat themselves. Ultimately, this is what Gilmore, Crocker and Clift hope to do by sharing their story.