James Branscome walks out of the Egyptian Theater on an especially frosty evening. His hands are stuffed in his jacket pockets as his breath comes out in translucent clouds. It’s late on a typical weeknight. You can barely hear the dying traffic and last vestiges of conversation coming from Hollywood Boulevard. There’s a tense vibe in the air, and it recalls a moment straight out of an Italian horror movie (circa 1977) in which an unsuspecting victim strolls through an empty plaza in Rome as an ethereal soundtrack builds and evil spirits crawl out of the ether.

Branscome turns to scan the movie posters on the Egyptian’s 1940s portico. The images are both striking and disquieting, just like the films they represent. There’s a pair of petrified eyes staring out of the blackness; some unsheathed knives reflecting blinding light; a woman being strangled with a cord, blood dripping from the titles… Cinematic Void’s January giallo marathon is here, and Branscome, C.V.’s  programmer and creator is excited. Excavating obscure cult and horror films, mostly from the ‘70s and ‘80s, and screening them to contemporary audiences is his passion, and he’s especially proud of his giallo program, now in its fourth year.

“I love giallo films, and when I started Cinematic Void I knew at some point I would be definitely be screening them,” he says, blowing into his hands. Unlike Cinematic Void’s usual output, which ranges from cult classics (Ms. 45, Hollywood Chainsaw Hookers) to straight horror (Return of the Living Dead), to the straight up weird (Zardoz), he views this series from an art curator perspective. Screening 35mm prints of five classic giallo films this year is his version of exhibiting the Mona Lisa. Giallo movies are considered the upper crust of slasher cinema, after all.

“Something about the gloominess of winter and the macabre subject matter makes January the perfect time to screen these films,” Branscome beams. “Four years in, it’s definitely the most popular series I program.”

For the uninitiated, giallo represents a subgenre of Italian horror which reached its apex in popularity back in the ‘70s. A typical giallo film features a psychedelic soundtrack, eroticism, lush cinematography, Hitchcockian mystery, black gloves and bloody murder galore. More enmeshed with style and tone than story, giallo’s surrealist concoctions gave birth to some of the greatest Italian horror directors in history, such as Lucio Fulci, Lamberto Bava and the master himself, Dario Argento. This year’s marathon features one of each of their films.

“The giallo is one of the more fascinating film sub-genres. Never just straight ahead murder mysteries, giallo films mixed everything from Gothic horror, the occult, sexploitation, psychedelia and the ridiculous,” Branscome explains. “One can’t overstate the importance of the giallo and its influence on the horror genre. It basically kicked open the doors for the slasher film boom of the ‘80s.” So, how did Branscome pick his favorite films from such a vast catalog? “I wanted variety, so I mixed it up with well-known titles such as Dario Argento’s Opera and fan favorite Torso with deeper cuts that rarely screen like A Blade in the Dark.” Branscome looks back at the empty courtyard, and smiles, almost wickedly. “We’re talking 35mm prints… beautiful, sinister films.”

For cult and horror fans alike, Branscome provides a priceless contribution to L.A.’s rich tradition of revivalist screenings. Unsurprisingly, Los Angeles is the best city for cinematic nostalgia. On any given day, you can catch a noir film from the ‘40s or a classic Western in one of our revivalist theaters.

Still, you might ask, what about the forgotten stepchildren of the ‘70s and ‘80s? What about those trashy jewels from late-night cable and grindhouse theaters that appeased our darker, baser sensibilities? We’re talking about movies like Ten to Midnight, The Burning, Sleepaway Camp, Burial Ground and Street Trash. All of these have screened at Cinematic Void, which Branscome says his wife Morgan named. “But, yeah, it also comes from my lifelong love of horror films,” he adds.

Branscome’s fascination for cult and horror started like it had for most of us- as a child. “I followed the left hand path of cult-film obsession early on,” he says. “Night of the Living Dead opened the flood gates. After that, I’d go to video stores, buy bootleg VHS rips of uncut Japanese laserdiscs and just consumed any and all horror/weirdo cinema I could find.” 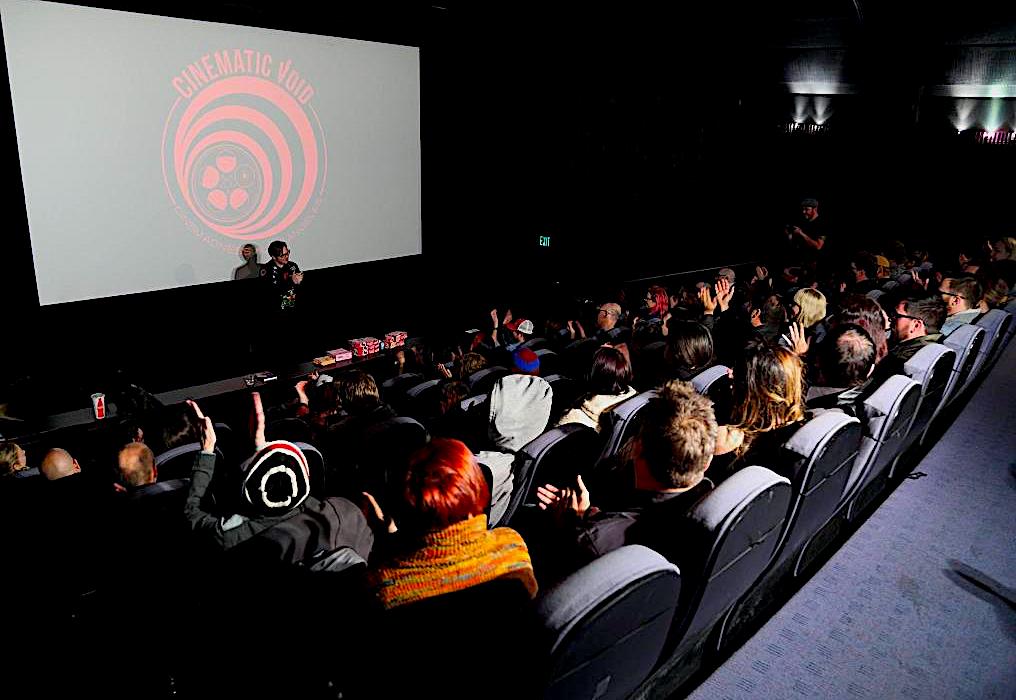 For many of us horror fanatics, cult film has been there in our darkest times, reassuring that the world is crazy, not just us. It’s the punk rock of cinema — a noisy, ridiculous, disturbing and ultimately surreal balm. And diehard fans love January giallo . Actually, “diehard” is a soft word for Cinematic Void devotees. We attend screenings like rabid football fans, but instead of jerseys and scarves, we wear T-shirts of emblazoned with our favorite weird films like Holy Mountain, Eraserhead and Vice Squad, (yes, this writer has a Vice Squad t-shirt).

Before heading off into the blackness of the night, we thank Branscome for Cinematic Void and the hunger its bizarre nostalgia has satiated in L.A., to which he nods humbly, before concluding, “It’s that urge for discovery and being able to share that is the backbone of Cinematic Void.”