Man with a Movie Camera (1929) at the Wende Museum

This week in arts and culture unfolds under the cloud of war and political tensions, and that’s reflected in a wave of civic-minded theatrical and dance-based productions, from the indie and intimate to the fancy and fresh from Broadway. More than one art exhibition considers the links between mind and body, health and public discourse; the Wende Museum is a treasure of newly-relevant Cold War cultural history; Dolly Parton writes a thriller with James Patterson; and the Candlewood Arts Festival returns to the Borrego Springs desert with an arts festival kick-off made for the community but free and open to all. Elevator Repair Service: Baldwin and Buckley at Cambridge at REDCAT (Live & Virtual). In 1965 James Baldwin and William F. Buckley, Jr. were invited to The Cambridge University Union to debate the resolution “The American Dream is at the Expense of The American Negro.” The result was a provocative and profoundly insightful confrontation between Baldwin, one of the most powerful figures of the civil rights movement, and Buckley, considered the father of 20th Century patrician conservatism. New York-based performance ensemble Elevator Repair Service, a company with a rich history of adapting unconventional texts, stages the debate verbatim. 631 W. 2nd Str., downtown; Thursday-Saturday, March 3-5, 8:30pm; Virtual: Saturday, March 5, 8:30pm; $15-$40; redcat.org. 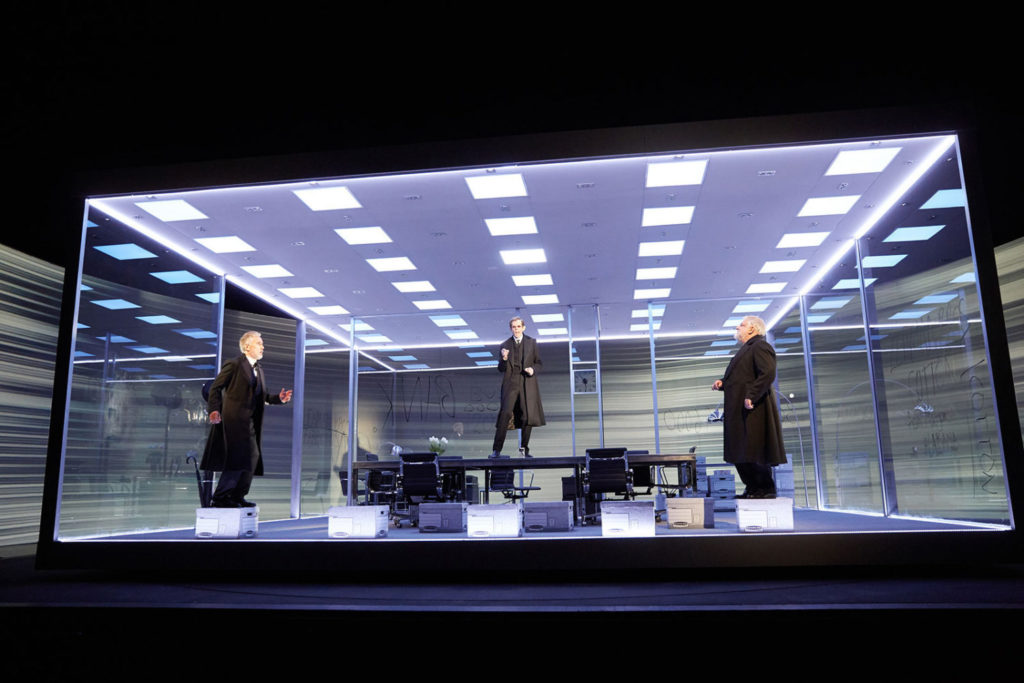 The Lehman Trilogy at the Ahmanson Theatre. On a cold September morning in 1844, a young man from Bavaria stands on a New York dockside, dreaming of a new life in the new world. He is soon joined by his two brothers, and an American epic begins. 163 years later, the firm they establish spectacularly collapses into bankruptcy, and triggers the largest financial crisis in history. Directed by Oscar, Tony, and Golden Globe winner Sam Mendes, The Lehman Trilogy is the story of a family and a company that changed the world, told in three parts on a single evening. 135 N. Grand Ave., downtown; Previews begin March 3; regular performances March 6 – April 10; centertheatregroup.org. Xandra Ibarra: Nothing lower than I, at Human Resources. The exhibition is anchored in an archival exploration and artistic study of Bob Flanagan and Sheree Rose’s canonical performances experimenting with sadism, masochism, pleasure, illness and disability in 1980’s and ‘90s Los Angeles. Playing with sub mythologies and objects, Ibarra considers the relationship between care and pain, art and labor, sculpture and flesh. Her sculptures—steel pasties, bruised leather hammers, and wheelchairs—contend with the interplay of consent, race, and disability. The exhibition is curated by Jeanne Vaccaro in a collaboration between HRLA and the ONE Archives. 410 Cottage Home St., Chinatown; Opening reception: Friday, March 4, 7-9pm; On view through March 20; artist talk March 9; free; h-r.la. Five Skins Presents: Man with a Movie Camera (1929) at the Wende Museum

Five Skins Presents: Man with a Movie Camera at the Wende Museum. The premiere of a curated live score by Five Skins co-artistic directors Daniel Goldblum and Dominyka Šeibok, the performance includes avant-garde wind quintet music from Cold War Hungary by composers György Ligeti and György Kurtág, paired with Dziga Vertov’s landmark cinematic innovation, Man with a Movie Camera (1929, USSR). The film begins with a bold declaration: “An experiment in cinematic communication…towards the creation of an authentically international absolute language of cinema.” With a wealth of wit and idealism, Vertov documents life in three Soviet cities — the now-Ukrainian cities of Kyiv, Kharkiv and Odessa — through a transcendent and singular camera-eye. 10808 Culver Blvd., Culver City; Friday, March 4, 7pm; free; wendemuseum.org. Ronald K. Brown/EVIDENCE: The Equality of Night and Day: First Glimpse and Upside Down at UCLA Royce Hall. Choreographer Ronald K. Brown blends African dance traditions and contemporary dance vocabulary to create an aesthetic style that is earthy, powerful and intimate. The Equality of Night and Day: First Glimpse is a new work which challenges the presumptions of balance, equity, and fairness with respect to young people, women, and people of color in light of contrary current events. With an original score by Jason Moran and spoken word by educator and activist Angela Davis. Upside Down (1998) begins with the premonition of community mourning, reflecting the impetus that drives the individual towards their destiny. 340 Royce Dr., Westwood; Saturday, March 5, 8pm; doors open at 6:30 for poetry and archive exploration, a graffiti zone, and more before the performance; cap.ucla.edu. How Do You See This World? The Art of Almighty God at the Fowler Museum

How Do You See This World? The Art of Almighty God at the Fowler Museum. This retrospective of paintings by prolific Ghanaian artist Kwame Akoto (b. 1950), known as “Almighty God” to his friends and acquaintances, ranges in subject from portraiture to Christian themes, to commentaries on the world’s problems. The opening celebration includes the exhibition curators in conversation, with Ghanaian musical entertainment, food, and drink. 308 Charles E. Young Dr., Westwood; Opening reception: Saturday, March 5, 5-9pm; On view through May 15; free; fowler.ucla.edu. Rapunzel Alone at 24th Street Theatre (and the Wallis). It’s 1944 and the war rages on in London. With her mom and dad on the front line, Lettie is evacuated to the country where she finds refuge on Miss Pearce’s farm. But at what price? Is finding safety for a 12-year-old mixed-race city girl in a rural, homogenous community akin to isolating her in a tower? British playwright Mike Kenny’s adaptation of the fairytale responds to the huge rise in the feeling of isolation among teens. Commissioned in 2019, over the course of the past two years of pandemic, lockdown, social uprising, election, insurrection, climate calamities, and war, the play continued to evolve as the world changed around us. 24th Street Theatre, University Park (March 5-April 16) and The Wallis, Beverly Hills (March 12-19); 24thstreet.org; thewallis.org. Selected Shorts: It Takes Two, at the Getty Center. Pen and paper, a tango, peanut butter and jelly: some things just take two. The hit public radio show and podcast Selected Shorts returns to the Getty to celebrate the power of two with classic and contemporary short fiction featuring a pair of strong characters that push one another to unexpected conclusions, and stories that emphasize what happens in moments of great cooperation, competing desires, and unexpected encounters. On this day of literature in performance, renowned actors of stage and screen will be paired with authors to bring the written word to life. 1200 Getty Center Dr., Brentwood; Saturday, March 5, 4pm; $20; getty.edu. 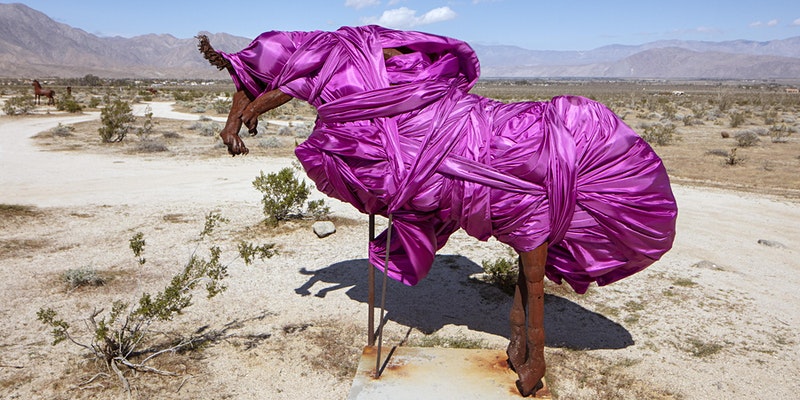 Panteha Abareshi: This Is Not A Body (Hunter Shaw Fine Art)

Panteha Abareshi: This Is Not A Body at Hunter Shaw Fine Art. Throughout an interdisciplinary practice that includes sculpture, video, performance, and print, Abareshi discusses the complexities of living as a chronically ill / disabled body in an ableist and normative society. Examining and dismantling our current definitions of “body” and “health,” definitions that rely on standards of able-bodiedness that are ultimately impossible to achieve, and laying bare her own experience of otherness, Abareshi confronts ableism through a nuanced critical examination of the Hospital as Institution, and the medical gaze as weapon, engaging complex power dynamics fraught with dimensions of race, gender, authority and the erotic. 5513 Pico Blvd., Mid-City; Opening reception; Sunday, March 6, 3-8pm; On view through April 10; free; huntershawfineart.com. Dolly Parton and James Patterson at Powell’s Books (Virtual). From Dolly Parton and James Patterson comes a thriller about a young singer-songwriter on the rise and on the run, and determined to do whatever it takes to survive. Every song tells a story; she’s singing about the hard life behind her. Find a future, lose a past. Nashville is where she’s come to claim her destiny. It’s also where the darkness she’s fled might find her. And destroy her. Run, Rose, Run (Little, Brown) is a novel glittering with danger and desire — a story that only America’s #1 beloved entertainer and its #1 bestselling author could have created. Sunday, March 6, 4:30pm; free with purchase of book ($30); powells.com. Heidi Duckler Dance: Illuminating the Bendix at the Bendix Building (Rooftop). A curated series of transdisciplinary salons, beginning with a site-specific consideration of the landmark art-filled building the company calls home. Intimate gatherings where the company’s family of artists, collaborators, and partners are given a platform to present their work to the community and cultivate conversation. Featuring Isabel Beavers, Joan H.P. Fricke and Nailah Hunter, who will each present and discuss their performance works, set against the gorgeous backdrop of downtown’s Historic Core as night comes on. 1206 Maple St., downtown; Sunday, March 6, 6-9pm; $25-$35; heididuckler.org. Burnt Sugar the Arkestra Chamber at the Hammer Museum

Burnt Sugar the Arkestra Chamber at the Hammer Museum. An avant groidd, multi-generation, multi-gender and multi-ethnic family who’ve performed around the world abiding by their recently-passed founder Greg Tate’s mantra of “Never playing anything the same thing once.” The hive-mind returns to SoCal to “caramelize” everyone within ear’s reach with their Cosmic Riddem & Eclectic Blue Cheer Conductions. In these live, in-person performance, Burnt Sugar “treats space, time, and genre like trans-dimensional silly-putty bursting with polyphonic and multi-rhythmic dap!” 10899 Wilshire Blvd., Westwood; Tuesday, March 8, 7:30pm; free; hammer.ucla.edu. History, Culture, War: The Ideological Underpinnings of Putin’s Invasion of Ukraine, at the Wende Museum (Virtual). Ideas about national culture and the (re)interpretation of history play a crucial role in the motivation of Russia’s war in Ukraine. The Wende Museum’s Chief Curator and Director of Programming Joes Segal will speak with Jonathan Brunstedt, Assistant Professor of History at Texas A&M University and the author of The Soviet Myth of World War II: Patriotic Memory and the Russian Question in the USSR (Cambridge University Press, 2021) and Jade McGlynn, Lecturer in Russian at Oxford University and author of Reliving the Past: How the Russian Government and Media use Historical Events to Frame the Present (forthcoming) about the war of ideas. Wednesday, March 9, 2pm; free; wendemuseum.org.