To walk through the current Lauren Halsey exhibit at David Kordansky Gallery is to consider much about black life, specifically South L.A. black life, in an outsized, candy-colored way. A mirrored wonderland, you find yourself looking at modern-day hieroglyphics that will undoubtedly need their contexts explained in the centuries to come.

What happens when you gather these signs and symbols, enlarge, raise, stack and arrange them like so many Rem Koolhaas buildings, is a beautiful disproportion of the everyday. In vibrant colors and various jig-jaggy fonts, they amplify the words of one of the signs in this show: “We are Still Here.” This is an exploration of South L.A. through the lens of an anthropologist in technicolor. And, as George Clinton put it in a song, Halsey is “Doin’ it to you in 3-D, so groovy that I dig me.”

“Basically, I’m making monuments to black people,” says the 33-year old Los Angeles native, repping Crenshaw to the fullest in a recent gallery interview with the Weekly. But this is no memorial or historic preservation endeavor in the traditional sense. Nor has that been the case for prior projects of hers like “we still here, there” at MOCA in 2018 and “The Crenshaw District Hieroglyph Project” at the Hammer Museum, also in 2018. There are similar topics and references within the new work on view, but with constant unpacking and evolution of thought about her place called home. “Crenshaw, over and over again?” some may ask. But consider Monet and his umpteen lily ponds. Upon entering the space (with special booties to walk on the iridescent floor), you see a variety of “stacks” as Halsey calls them. Various types of signage arranged on cubes of different sizes piled as much as 14 feet high it seems. To some, the signs are mundane — a giant soda bottle, beauty salon signage, mixed with advertising for “We Buy Houses” in a telltale sign of gentrification and “Buy Black”–type shout-outs. But to others, it is an affirmation of existence.

The signage is an amalgamation of gathering and collecting for years. The stacks are a reflection of the neighborhood as dreamscape — not only because of the vibrancy but because many of the businesses and posters are for things that no longer exist. For Halsey, it’s a curiosity and fascination with a sense of place that started with her early pursuits in architecture that directly led to assemblage. “When I was in the architecture program at El Camino College in Torrance [2005-10], I started taking more art classes, and intentionally thinking about where I live. I started documenting and collecting signs in South Central mostly because I had always been obsessed with local graphics and stylistic details like penmanship, color, fonts, etc.,” she told MOCA in an interview. That curiosity would follow here to Yale as she got her MFA there.

This constant mapping, remapping and then remixing the remapping is what turns out juxtapositions like a “We Buy Houses” suite of signs in a stack over a “Waz Up” store sign — showing temporary flyness as well as a cautionary future all at once. And sometimes the mapping needs no introduction, as in the case of works with signs reading “Finger Wave Specialist,” “Black Workers Rising” and a piece called “Summaeverythang.” This last piece, which after listing multiple goods and services all in one tiny store (e.g. EBT, Copies, Brazilian Human Hair, Tobacco), closes with a phrase in brush script  that could be a metaphor for the entire show: We got what you need. Because this show does have the everything of blackness.

“I was thinking of architecture and city blocks,” Halsey says, when she was creating this presentation. She cites the work of Superstudio, a Radical architecture coterie of the 1960s in Italy, as a favorite. “I started with models in 2012 and just kept adding, collecting, positioning, tinkering.”

While evocative of the streets, the space itself is without a prescribed path. You can feel free to meander and you’ll likely not explore it the same way twice. Part of that is attributable to the strategic placement of mirrored walls.

Even the promotion of this show was given a very vibrant South L.A. treatment as well. Halsey took action and ran ads in black publications, asking for inserts about it for church programs, and more. “Yeah, it was hella full of black people that opening night,” she says with a sly grin. “It matters though because I’m trying to consciously archive my neighborhood.” 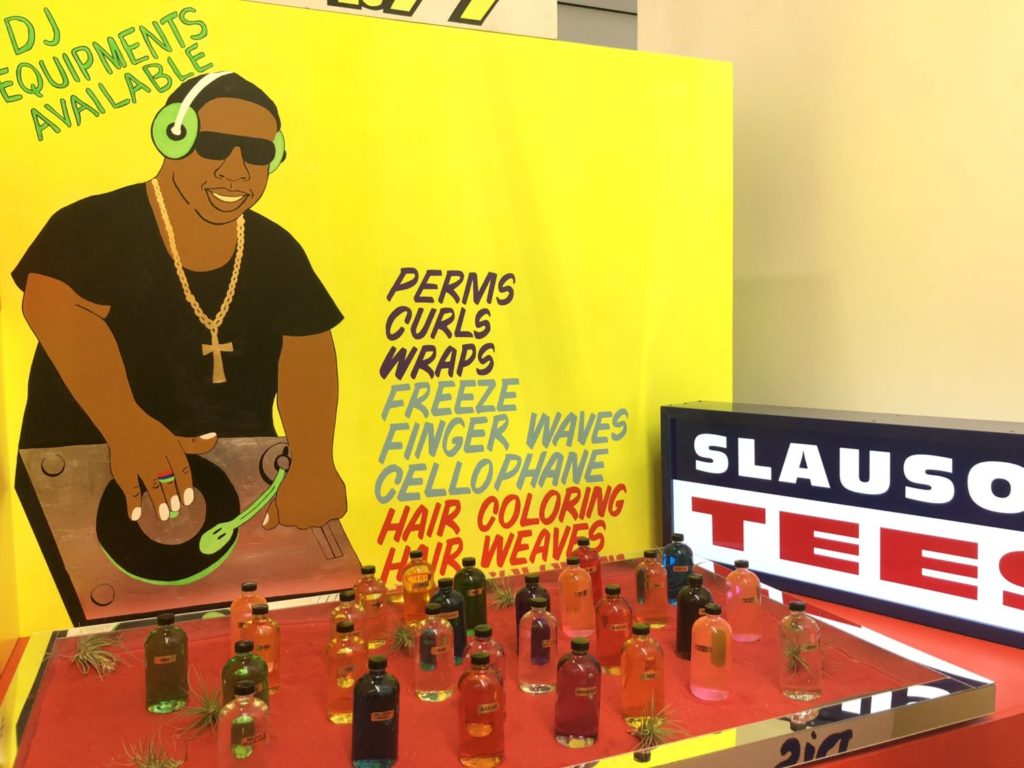 When we asked the artist what would a soundtrack to the creation of this show sound like, we did not get a Spotify playlist. There’s music — like Parliament Funkadelic — but far more place-specific soundscapes that came to mind. “Um, you know it’s the corn man, the tamale man, helicopters, the corner preacher, backyard fight parties,” she said. Indeed, it is an orchestra of a different stripe.

For the future, Halsey wants to get closer to architecture, she says, and you get the sense that the collecting and mapping and signing is on a track to meet up with early aspirations of hers to build a sense of place. One example of that is a project she’s working on to create a community center in South L.A. for teens to hangout. As she described it, we recall a sign that says “Welcome to…Chill House.” And that is exactly what she was thinking about. Somehow, it’s not unreasonable to imagine in the not-so-distant future an actual structure like the Arc de Triomphe, made up of technicolor signs and symbols, a black mythography hovering over a section of Crenshaw, and etched into stone in a cursive black hair-care package font, the words “We Still Here.” Until then, we have these wondrous stacks, these towers of flava and liberation, to guide us.

The exhibition is on view through March 14 at David Kordansky Gallery on La Brea Blvd.

For more about Lauren Halsey, see our profile of her in the 2019 Arts Issue.