In a world of questionable cannabis collaborations, The Gelato Festival’s new offerings with Sherbinskis is something that makes perfect sense.

While Gelato Festival’s traveling component to find the next world champ has faced the same circumstances as all events in recent months, its flagship shop in West Hollywood carries the torch through the pandemic. It has now received various accolades, with A-listers often stopping by for a scoop. The shop’s latest creation to get excited about is its new pair of flavors made in collaboration with one of the most famous cannabis breeders of the last decade, Mr. Sherbinski. 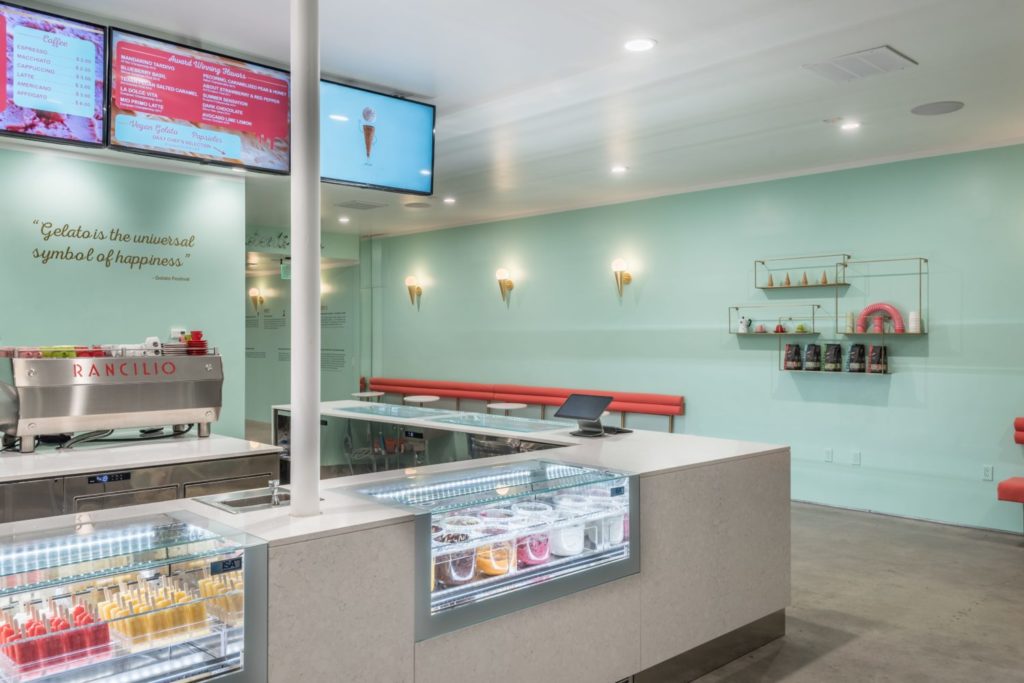 Prior to opening the brand and Fairfax dispensary that shares his name, Sherbinski changed the cannabis game by pairing Sunset Sherbert x Thin Mint Cookies in a collaboration with The Cookie Fam’s genetics patriarch Jigga. The resulting offspring from that effort would be Gelato. It would take over the weed world after Cookies and prior to Zkittelz having its rise to fame. Sherbinski continues to refine the Gelato lineage to this day. As he transitioned over from the shadows of the medical marketplace, Sherbinski, now openly going by his full name Mario Guzman, was as apt at branding as he was at producing cannabis. Today, the iconic orange jars of Sherbinskis are known for elite representations of one of the biggest strains of all time grown by one of the people who made it happen. We were able to get Gabriele Poli, founder and president of Gelato Festival, and Guzman on the line to chat how this newest wave of gelato hype and how their separate tales of enthusiasm around the subject eventually intertwined.

“Basically, an Italian woman that knew about the festival was in the store. She sent me a message that said I needed to meet her friend and we ended up getting together,” Guzman told L.A. Weekly. “Instantly we sort of recognized we both had a real admiration of gelato. Him being from the actual dessert side and me being from the flower, and you know, we built off that.”

With the Gelato Festival’s shop as his canvas, Poli got to work creating two flavors inspired by some of Sherbinki’s most famous works. Sunset Sherbert and Bacio Gelato 41 were released to much fanfare last weekend, quickly selling out.

“We met each other and we immediately clicked,” Poli told L.A. Weekly of their first encounter. “When I met Mario, and you know his energy, his passion, his love for what gelato is and what it’s inspired for him in his career and his business.”

Eventually they would also decide to make the pair of flavors as inclusive as possible, vegan friendly and traditional.

“The Bacio is one of the most famous Italian gelato flavors. It’s very traditional,” Poli said before noting their version uses an oat milk base in addition to pure cocoa and hazelnut. They also add pieces of dark chocolate and hazelnut in the final presentation on cones and popsicles. Guzman grabbing a scoop of his latest collaboration outside the cannabis space.

Poli next researched the primary colors of the sunset to get his inspiration for the Sunset Sherbert. “We wanted to do a sorbet of course, because sherbert is sorbet,” he said.

“So it’s a water-based flavor with four fresh fruits inside which are strawberry, blood orange, we use a Sicilian blood orange that is shipped into California, a Sicilian mandarin, and then banana, plus a twist of lime.”

Poli found that during the tastings the lime proved an excellent addition to bring all the flavors together. The frozen treat version of the Sunset Sherbert features a vegan white chocolate coat with orange sprinkles to match Sherbinskis branding. Each flavor was built from scratch with these kinds of details in mind.

As for the final product?

“I like them both,” Guzman said while pointing to the consistency of the oak milk being a plus, while the Sorbet was a solid offering for people that don’t like chocolate. He appreciated how the subtle differences in what Poli created mirror the differences in various cannabis he produces.

Sherbinski believes as he moves into the food and dessert industry, the idea of pairing up with things that build on what he has created in the past only makes sense. He really enjoys telling people that come into his shop they can go pick up some matching Bacio at Gelato Festival.

“I can tell them, ‘hey why don’t you try some Bacio Gelato, the actual gelato, to go with your Gelato 41.’ And they just, I mean, people really gravitate towards it and it resonates with them. It brings a lot of joy to them,” Guzman said, “That was kind of the idea behind what we wanted to do, evoke the emotion of being young and having a treat, and the happiness that brings especially with everything that we’re going through right now in our communities, as a nation,  and globally.”

These versions won’t have weed in them, but Guzman certainly hasn’t closed the door on the idea, and he already has the manufacturing license he would need to make it happen. A gaggle of Lamborghinis arrives to get their hands on various elite gelatos.

Guzman noted that seven years ago when they were coming up with a name for Gelato, they simply asked themselves what was a treat people would really gravitate towards. “And I wanted to think of a treat that was international, being that we’re from the states,” he said and since the Sunset Sherbert was more local to S.F. being named for a Rainbow Sherbert that Guzman would buy scoops of while he waited for his mom as a kid. After he found Gelato in a Google search and realized there were a bunch of different versions to go with the various types of cannabis he was creating, he knew he had a winner. When Guzman found out that the history of what Poli was trying to do dated back centuries to Florence, he again knew he’d found the perfect fit. It was time to make an actual Sherbinskis Gelato you had to keep in the fridge and not smoke. Poli has now spent a decade running the Gelato Festival around the globe, prior to finally making a home in Los Angeles. While they are still working on the digital version of the wildly successful live event, there is still plenty for him to be excited about almost a year into his West Hollywood adventure.

“We are all surprised that during COVID we have been doing good,” Poli said of the most important part of the first year’s reception. “We already have a really strong customer base and people are loving the product we are offering here.”

Poli said a major part of the shop’s success is that it’s a wider experience of gelato as a whole.

“We have an exhibition teaching so you can see the manufacturer of gelato live every day in the store. It’s a different concept, not only for L.A. but worldwide. There’s nothing similar, even in Italy. We are very happy and already working to expand the concept,” Poli said. If you don’t catch the Gelato Festival cart while it’s at Sherbinskis, you can take part in that experience while picking some up in West Hollywood.