Asher Hartman is an interdisciplinary artist, writer, director and performer whose psychologically charged, absurdist and surreal productions are infused with a profound skepticism toward the violent underpinnings of our culture. Hartman is the founder of Gawdafful National Theater and a member of the performative duo Krystal Krunch (with Haruko Tanaka), and he teaches intuition-building practices to those who would benefit.

His new book Mad Clot on a Holy Bone: Memories of a Psychic Theater was just released on X Artists’ Books, the first published collection of his art and especially his playwriting, much of which evolved during his association with interdisciplinary arts house Machine Project between 2010 and 2017.

ASHER HARTMAN: I knew I was an artist when I wrote, directed, produced and acted in my first play “Girl of the Bluebells” in first grade. I wore fake matted hair and sacrificed myself for spring by taking a cardboard blade from my beaded necklace and stabbing myself in the throat.

American psychological violence and the unconscious material that arises through our language, actions and sexuality.

I would be a Jungian analyst or an actor.

Yes, I went to CalArts with the mistaken belief that it would be like the 19th century where we would walk through golden fields to do a mess of plein air painting while blackbirds darted above our heads before the coming squall. I didn’t have a clear idea of what graduate school was about. It did turn out to be one of my brightest dumb ideas. I learned so much and met some of the smartest people I know. It made me an artist in ways that I could never have planned or created for myself despite the economic hardship.

L.A. is the best! I love L.A. for so many reasons. First, it’s funny as hell. There’s always something to laugh and cry about. Second, the art community is generous, expansive, accepting, experimental and forward-thinking. You could come from Venus with a cool idea and someone will give you a show eventually. I can’t imagine another place where I could do the work that I do, which is a hybrid of performance and theater, cringe comedy, and experimental writing that’s tough to digest. People seem willing to think about what’s happening in the work with genuine curiosity, openness, and analysis. There was, and perhaps this is changing, space here. Having physical space, being near or in the film industry, underground culture, next to an immense, hopeful creative energy from all over the world, who may have a speck of willingness to give up cynicism as a position, makes this place a delight. 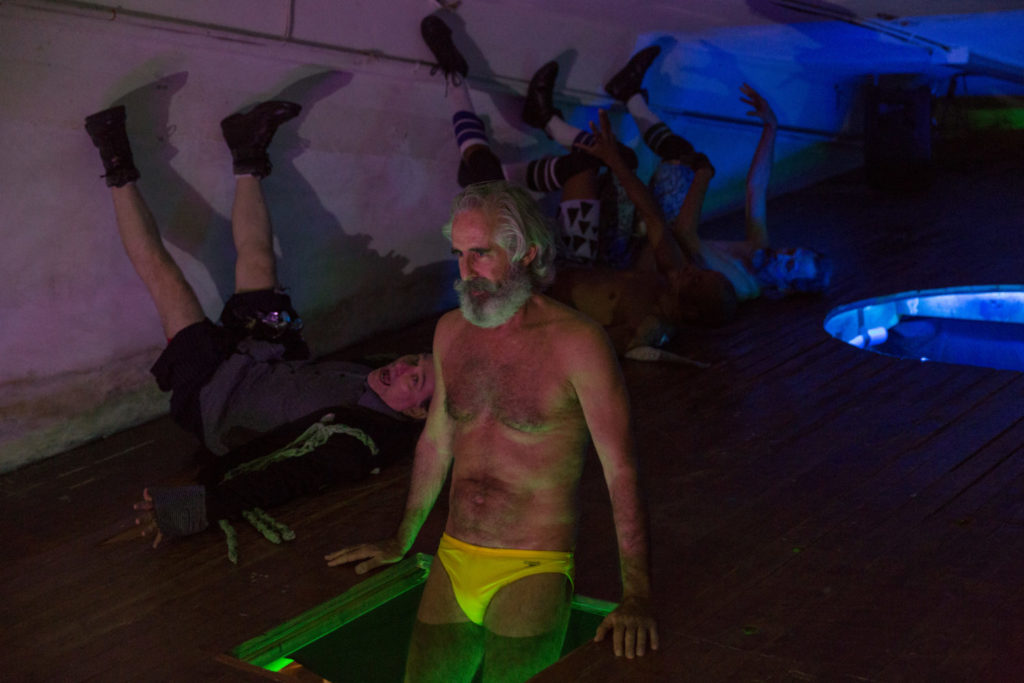 My first visual art show was in 1999 with the glorious New Image Art in West Hollywood. The curator, Marsea Goldberg, gave me a chance to do whatever I wanted, and I made a show called Lesbian Bordello, four rooms of performance installation about sexual dreams and frustrations. As always, I had so many wonderful people helping me with costumes and sets, and brilliant beautiful actors.

But I did a show with Lara Bank at her extraordinarily fruitful Sea and Space Explorations in Highland Park that connected me to Mark Allen at Machine Project, and to a period of time that essentially shaped my work. I don’t know if every artist can say that they have had the kind of love and support from another artist and institution that I have but I did seven shows with Machine, learning how to craft my work through Mark Allen’s guidance.

I’m working on The Dope Elf, a six-part traveling show about white supremacy as seen through the American fascination with European mythologies. My theater, Gawdafful National Theater, and I opened at Yale Union in Portland, living in the gallery for a total of a month in tiny homes designed and built by visual and theater artists. The actors — Michael Bonnabel, Philip Littell, Zut Lorz, Paul Outlaw, Joe Seely, and Jacqueline Wright as the Dope Elf — play numerous roles multiple nights of the week. They are dexterous, lean, powerful performers, who have worked on hours and hours of text — it’s something to see! We’ve worked on this project for more than a year, and when the pandemic allows, we will be going to The Lab in San Francisco for a similar residency. The play is grueling work for the actors and crew, literally living in this drama, but I think it’s one of our best works.

If I didn’t mind being eaten alive by talent, I would say, Werner Herzog, Ligia Lewis, Romeo Castellucci, Jodorowsky. Autumn Knight. and Rip Taylor. I’d like to watch a Forced Entertainment rehearsal. Honestly, I get to work with some pretty brilliant people, so I’ll just hit the “fan” button here. I would be good at getting snacks — foodstuffs, that is.

I do. For one piece, I listened to the soundtrack from Solaris by Eduard Artemyev over and over. Same with Sylvester and Kansas for another piece. Perhaps this is too revealing, but there has been a recent overuse of The Backstreet Boys videos and Michael Jackson’s Smooth Criminal; but mostly, silence.