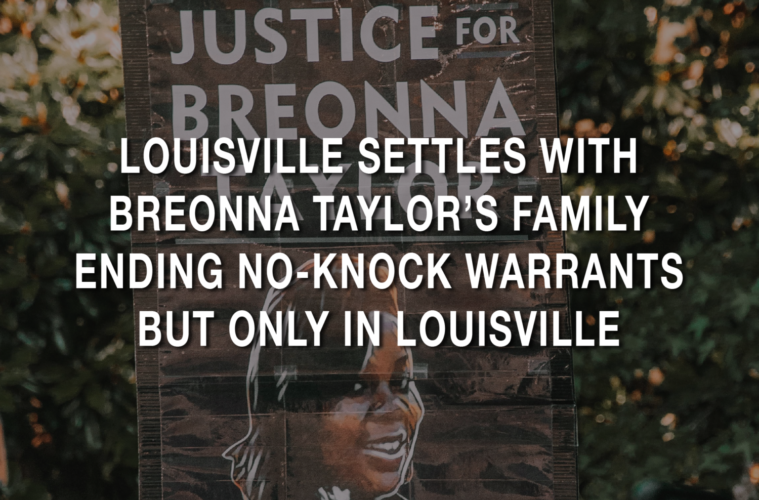 The city of Louisville, Kentucky, has agreed to pay $12 million to the family of Breonna Taylor, a 26-year-old African American nurse, who was fatally shot eight times by Louisville Kentucky Metro Police Department officers who entered her apartment, while serving a “no-knock warrant” on March 13. She was in her bed sleeping and no “drugs” were found.

And Louisville has agreed to “institute sweeping police reforms.”

CNN reports that “as part of the settlement, the city agreed to establish a housing credit program as an incentive for officers to live in the areas they serve; use social workers to provide support on certain police runs; and require commanders to review and approve search warrants before seeking judicial approval, among other changes.”

Unfortunately, these reforms are limited to the city of Louisville, and will do nothing to stop similar tragedies in the rest of the country, resulting from similar raids that have become “Standard Operating Procedure” in the Drug War.

I have not been able to find an accurate count of the number of raids but it would appear that there were at least 20,000 “No Knock” raids last year, and perhaps far more.

“The number of no-knock raids has increased from 3,000 in 1981 to more than 50,000 in 2005, according to Peter Kraska, a criminologist at Eastern Kentucky University in Richmond. Raids that lead to deaths of innocent people are increasingly common; since the early 1980s, forty bystanders have been killed, according to the Cato Institute in Washington, D.C.

In Utah, no-knock warrants make up about 40% of all warrants served. In Maryland, 90% of SWAT deployments were to serve search warrants, with two-thirds through forced entry.

From 2010 through 2016, at least 81 civilians and 13 officers died during SWAT raids, including 31 civilians and eight officers during execution of no-knock warrants. Half of the civilians killed were members of a minority. Of those subject to SWAT search warrants, 42% are black and 12% are Hispanic. Since 2011, at least seven federal lawsuits against officers executing no-knock warrants have been settled for over $1 million.”

And if anyone still thinks this is a “liberal” issue, consider that Newsmax.com, the very conservative news site reported in 2015:

2. Judges approve them far more often than not. A 2000 investigation by The Denver Post found local judges routinely issued no-knock warrants even when police didn’t ask for them, and simply converted regular warrants into no-knock with a signature.

3. An ACLU study of more than 800 SWAT team deployments in 2011-2012 found 79 percent were to execute a search warrant, usually in a drug investigation…

4. The same ACLU study reported, “Of the cases we studied, in 36 percent of SWAT deployments for drug searches, and possibly in as many as 65 percent of such deployments, no contraband of any sort was found.”

5. In 2003, then-NYPD Commissioner Ray Kelly estimated that 10 percent of the more than 450 no-knock raids his officers carried out every month went to the wrong address…”

In fact, the Drug War is a major factor in all of the problems in the African American community. Blacks are 12% of the U.S. population but make-up 37% of the prisoners in the American gulag. Consequently, while Taylor’s death seems to have led to local reforms, the Drug War continues.

And Abolish the Police? No, We Need for the “Drug Warriors” to Go Back to Being “Peace Officers”

Richard Cowan is a former NORML National Director is the author of what What Athletes May Want To Know About CBD.