LostinVegas: A Rising Star with an Inspirational Story

In Partnership with Imperium GroupDecember 14, 2022 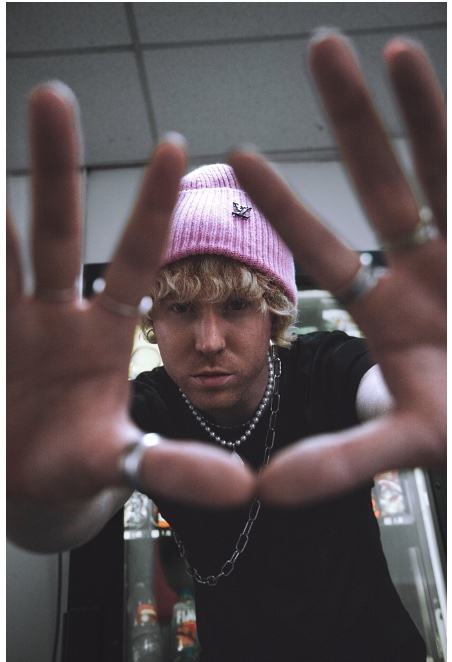 One of the rising stars in the music world is singer/songwriter Austin Cain, known by many as the artist LostinVegas. LostinVegas’ lyrics and music have caught the attention of many music industry heavyweights. After touring with artists like Mod Sun and Machine Gun Kelly across the United States, Austin returned to Los Angeles, where he has continued to create music that inspires his listeners to believe that anything is possible. With his latest songs like Got Lost, “2AM Ft., “Rook,”  “Conversations,” and “If I’m Being Honest,” he is encouraging people who are going through tough times to persevere and go after their own dreams. We stopped in to talk with Austin and to learn more about his unique journey that he has taken to get to where he is today: inside the door of the music world, with his professional future right before him.

Austin says one of his biggest influences on his musical career was his uncle, who played in a band as Austin grew up. “I can remember sitting out in the audience, listening to him and seeing how much fun he was having and how good he made everybody feel,” he states. “It was like everything ceased to matter outside of where we were at that moment, and that made a big impression on me. After that, throughout my adolescence, I was always writing lyrics and poems, trying my best to stay connected with that feeling.”

Austin reveals that he wasn’t quite committed to music just yet. “My main focus back then was playing soccer so that I could go pro, and music was just something I liked to consume. That all changed when I met a friend in college. He would take his lyrics and poems and put them to music, and he taught me how to do this, too. Once I saw how I could give life to my own lyrics through melodies, I quickly became obsessed and never looked back.”

His early days as a musician were full of trials, tribulations, and self-discoveries. Music forced Austin to dive deeper within himself. In creating his music, he got to know a completely new side of himself that in retrospect he felt had always been there, screaming to come out.

“It was so freeing to finally take this step into my artistry,” says Austin. “Creating what I enjoyed made me feel like a kid again. I was always writing lyrics, expressing myself in a way that I had never been able to do before.” During this time, Austin quit playing soccer and gave up his dreams of going pro so that he could be a full-time musician. He moved back to his hometown, Las Vegas, where he continued to go to school. When he wasn’t creating, he was either doing homework for his college classes or working to earn money for studio sessions.

He wasn’t satisfied as an artist, however. Feeling that he needed to dive deeper into music, he watched Jim Morrison videos and saw how committed Morrison had been to his art. If Austin wanted to call himself an artist, then he would have to live like one. He gravitated more and more towards the idea of moving to Los Angeles.

“I wasn’t naive – I knew the odds of making it in the industry, but that wasn’t important to me,” says Austin. “When you are an artist, you have to go for it, or you won’t remain true to yourself. I just needed the right opportunity.”

One day, Austin read a Mod Sun retweet that said interns were wanted at an LA warehouse. He laughs when he admits he responded by stating he lived only five minutes away, which ironically was the reason why he even got a response back for an in-person interview. The next day, instead of going to class, he drove to LA to meet Mod Sun’s business manager, and that was the beginning of his career in the city’s music industry.

After some negotiations with his professors and his family, Austin was able to take the internship. The pay was just enough to get him by, and he alternated between sleeping on his cousin’s couch, in his truck, or inside the warehouse. “My biggest break came when I helped Mod Sun move out of his house one day. The timing was pivotal because he had just been asked to tour with Machine Gun Kelly. Mod, not knowing who I really was, asked me if I wanted to come with him and help out. Without any hesitation, I said yes.”

He will never forget touring with two of the biggest names in the music world. “Machine Gun Kelly was selling out every single venue and drawing crowds of 4,000 people each night in almost every state,” Austin remembers. “These artists had created such a big movement, so I constantly studied them. I listened to them talk and observed how they treated fans, how much work they put in, and how they performed.  I got to know all of the band members pretty well, too.”

He says that everyone took him in and looked after him, as he was the only one who had no tour or music experience whatsoever. Eventually, he was promoted to being a personal assistant, so he got an even deeper look into the world of touring and concerts.

“When the tour finished, Mod Sun and I kept in contact, and I eventually became a part of a group of artists he wanted to mentor called ‘The New Hippies.’”

Austin was able to move in with Mod Sun and began learning everything he could about music and the industry, including how to be successful, how to record, and, most importantly, how to find his voice. He went on three more tours with him, playing in pretty much every venue in the United States.

“This was when LostinVegas was born,” Austin explains. “I had learned enough that I could finally call myself an artist. I was certain I had made the right decision and that I hadn’t been crazy this whole time. Mod Sun changed my life and had a huge impact on me and really helped to develop me, and I was ready to apply his guidance to my career as an artist.”

In the four years since touring with Mod Sun and Machine Gun Kelly, Austin has seen a lot of doors open for him in the music world and has been able to go further with his career than he had ever envisioned. Even as he works hard to develop himself as an artist and to grow his career, Austin still has one more goal: to show other artists, creatives, and people who are passionate about something that it is okay to take that risk and jump into the unknown.

“The initial jump is scary,” he concedes. “You don’t know where you are going to land, but really, anything that is worth chasing after is going to be like that.”

As much as his career is clicking, he still has days when he feels like giving up. That’s when he rereads the messages he receives everyday from people who say his music has changed their lives.

“Their support means so much to me,” says Austin. “I hope that my music inspires them the same way their words inspire me. I want to be the light at the end of the tunnel for those who are lost in the dark, searching for hope or something to hang on to. If I can use my music to help them escape the stress or pressure in their life, I have done my job here as an artist.”