A Los Angeles nonprofit benefiting charities for women and children, Visionary Women recognizes female leaders who serve as role models in the community. Throughout her extensive career — from unforgettable film roles and  fitness guru to author and producer — Fonda, now 82, has used her celebrity status to fight for anti-war, civil rights and feminist causes. Most recently, the current star of Netflix’s Grace and Frankie, founded Fire Drill Fridays, a climate change protest movement, in partnership with Greenpeace.

“We’re thrilled to be honoring Jane tonight with our first Visionary Activist Award,” Shelley Reid, president of Visionary Women, told L.A. Weekly before the program commenced. “She’s the real deal. She has stood up and spoken out and is an icon in everything she has touched.” “Only a few individuals known for their lifelong activism and commitment to national and global issues truly walk alongside those who are suffering and put themselves at risk for change,” Arquette said in her introduction. “It is no secret that the extraordinary woman whom we are here to honor is that kind of trailblazer. As one of my dear friends for almost 40 years, I know that Jane, a true force of nature, is a visionary woman in every sense of the word. In sisterhood and in solidarity she is a faithful and fearless female.” 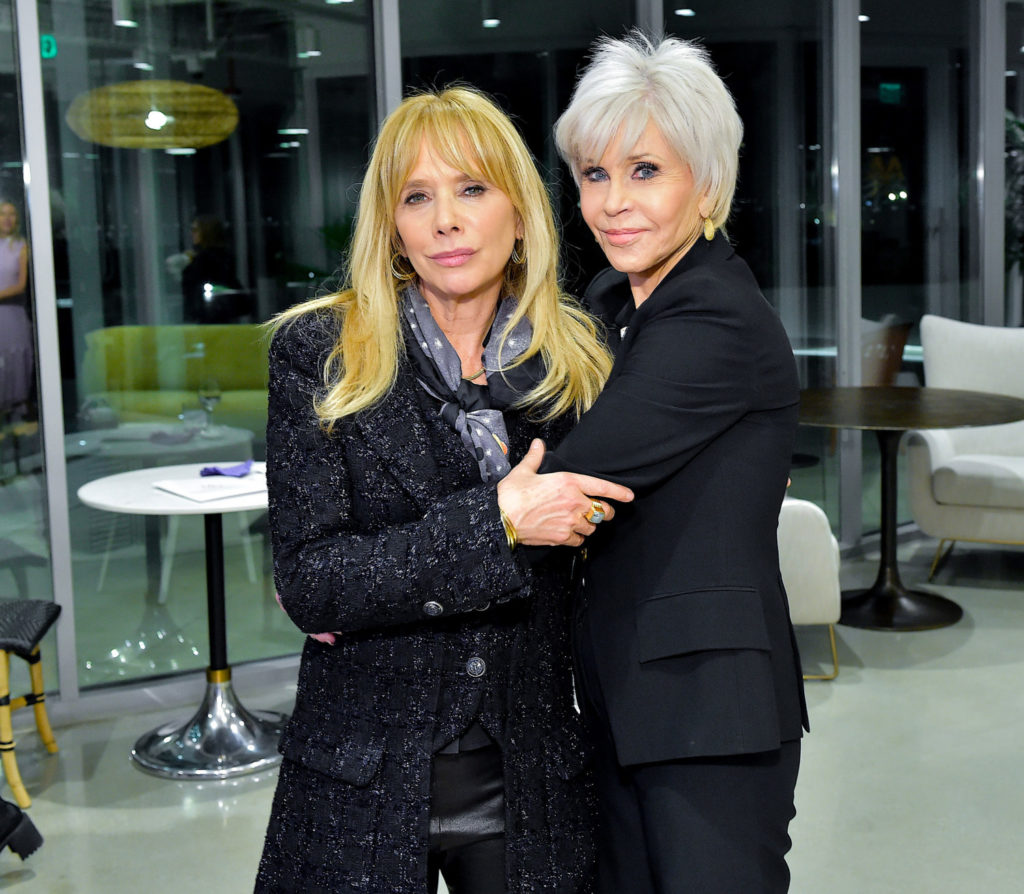 Fonda took to the stage, making an impassioned speech about the urgent and vital need to come together as a community to protest climate change.

“We’re facing a collective crisis with the climate crisis that can only be solved by a collective response,” Fonda told the rapt crowd. “Women and girls are less vulnerable to the disease of individualism. And that’s why almost every Friday in D.C., the women, especially older women, outnumbered men five to one. We need community and we need it now more than ever.” A partnership with world-renowned art collector and philanthropist Chara Schreyer, curated by the Hammer Art Museum’s Erin Christovale, also launched at the event. The interactive art activity saw attendees put their hands in silicone molds for use in a collective life-sculpture in the shape of a pregnant nude. The completed work by L.A.-based artist Rosha Yaghmai will be installed in a public space in the city to generate discussion on womanhood, vulnerability and hope. Eventually, the piece will be sold, with proceeds benefiting Los Angeles’ Downtown Women’s Center.

“We see art as an agent of change,” Reid shared with L.A. Weekly. “The project represents our vision to expand across generations, across the geography of L.A. and reach out to a diverse community of women.”

More info about the organization at visionarywomen.com.