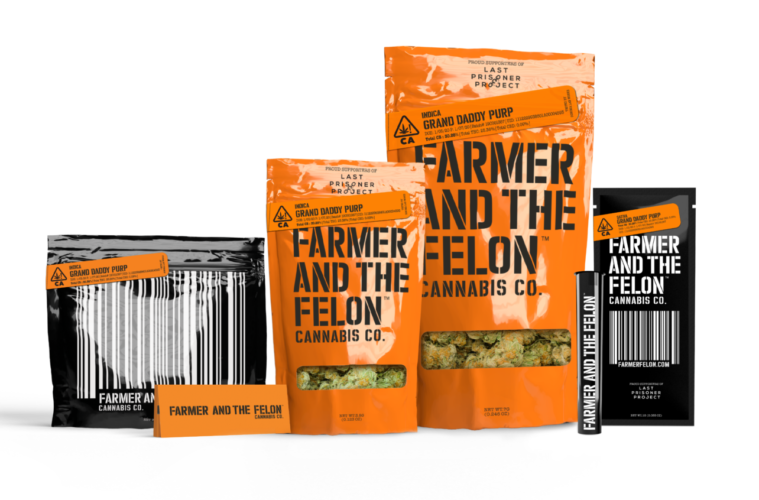 (Photos courtesy of Farmer and The Felon)

Farmer and The Felon: A “New” Pot Brand With a Ton of History

While many new brands entering the cannabis industry are desperate to buy some kind of authenticity by associating themselves with the best parts of cannabis history, Farmer and The Felon’s effort to support those still incarcerated for pot in the era of legalization is so much more than that.

And while Farmer and The Felon’s corrections uniform inspired packaging is just hitting shelves, cofounders and namesakes Ned Fussell and Dennis Hunter have a long history in the cannabis industry. Most notably as the founders of their new efforts parent company Canncraft, one of the state’s biggest manufacturers of cannabis products. Other brands under the Cannacraft umbrella include one of the nation’s oldest CBD companies in Care By Design, along with AbsoluteXtracts and Satori Chocolates. Fussell and Hunter’s business relationship started like many in wider cannabis folklore at a grow supply distributor owned by Hunter. After Fussell shopped there for a bit they became friends. Eventually, Care By Design was the first thing they brought to market at a team then everything evolved into what they have today.

We asked the pair what it was like to now launch a brand that was so much more personal than their previous efforts. While they are the guys behind these big-name companies, they are in a much deeper sense the farmer and the felon. Both are farmers, but the name is a result of a 1998 raid on a grow site operated by Hunter in Humboldt County.

The law would eventually catch up with Hunter after almost five years on the run. He ended up doing over six years in federal prison. When Hunter was eventually a free man, he put the skills he’d previously been incarcerated for back to work creating ancillary cannabis products, eventually meeting Fussell.

“For us, it was a long time coming,” Fussell told L.A. Weekly. “For a lot of years there, we operated in a grey area. It wasn’t really in our best interest to get our permit and get out there that way.”

One of the factors for staying away from flowers over the years was they didn’t want their delivery trucks smelling like cannabis. “It was almost out of a liability sense,” said Fussell. They’d already made it so far with their brands, they thought why risk it over flower?

But one of the things that changed Fussell’s mind was how impersonal the wider cannabis market had become. No brand had a tale similar to what he and Hunter had already experienced and succeeded at.

“It’s who we are to the bone. We’re not bankers, where not ex-wine and -spirits execs, ya know? Or private equity guys, just trying to come in and spin a deal together then get out in two years. This is really what all both of us have ever done,” Fussell said. “Time will tell, but it could possibly be what we do for decades to come.”

Fussell spoke of the skill and strategy it took to start a successful cannabis brand, but spoke of the wider community of growers severely impacted by legalization, “in the end we drew the right straw. We made it through the gauntlet. And we definitely always wanted to have a platform to tell the stories of the people that collectively together built up cannabis.”

Fussell noted many of those people that contributed now have a felony on their record, like his partner, which makes life a lot more difficult.

Hunter spoke of the decision to move forward with his first fully legal flower lineup 22 years after he originally got in trouble with the law. “It’s one of those things. At some point in your life you’re a felon, and you’ve been in prison. And you’re sort of hiding from it a little bit, a lot of people look down on that,” he told us.

Hunter got to a point in his life where he just refused to be ashamed of it anymore. “And not that I was really ashamed of growing cannabis, but going to prison kind of puts a stigma on you,” he admitted. The amount of change he’s witnessed over the last few years in the industry also inspired the launch. As the industry expanded, Hunter saw these people coming in with their fancy packaging, but many were buying the flower they were putting in their bags “with little to no connection to the plant.”

“I think that was when we just decided we’re going to put out a brand and we’re going to tell our story. Our story is compelling, it’s sad, it’s great, it’s all the different emotions you could imagine,” Hunter said. “This brand tells that story, gives that history that I think people will find interesting.”

Another big part of the company’s ethos is advocacy. A portion of profits will go to The Last Prisoner Project, a criminal justice reform nonprofit organization with the intention to keep fighting until every nonviolent cannabis prisoner has been released from the criminal justice system they don’t deserve to be in. Hunter is a founding advisory board member of the Last Prisoner Project.

We asked Fussell and Hunter why we don’t see more advocacy at this level in the age of legal cannabis? Sure some folks cut checks, but no company is intertwined with the idea of reform quite like Farmer and The Felon.

“Because nobody in the cannabis space is living a mentality of thriving,” Fussell replied. “It’s survival mode right now. People look at us, think we’re on top, but it’s very difficult to make any profit in this industry right now. When you’re just trying to keep the business afloat, giving back and figuring out what you can do to help doesn’t necessarily come first to mind.”

So essentially the cost of doing business in the legal cannabis industry is one of the main factors in how much it can afford to give back? Pointing to the current state of the tax code and legality of deductions, Fussell said if you’re not making a profit “it’s hard to give away money you don’t have.”

We asked about the uniqueness of the brand in the age of PR buzzwords in regards to popular terms like sustainability. Fussell thinks a lot of the sacred words we use to describe cannabis have been cheapened in the last few years.

“Sustainability goes beyond the farm. How employees are treated. How there is equity amongst everyone, so as the tide rises it can raise all ships,” said Fussell. Cannacraft recently completed a deal that gave everyone in the company equity.

Another part of sustainability is consistency. People who work in elite CBD products have always had much more stringent protocols around testing because they are dealing with people with compromised immune systems. So the ethos of sustainability at Care By Design all these years can be used to kind of set a bar for expectations.

We got our hands on some Farmer and The Felon flower to test. We enjoyed the Shark Shock. It was a nice throwback to the terpenes of the early 2010s, but they have other fun up-to-date offerings like Motorbreath and some Ice Cream Cake coming this summer they are hyped on. Fussell’s current head stash is Lemon Mints. The rest of the current lineup includes Mimosa, Lemongrass, Motorbreath, Vanilla Frosting in ⅛ oz, ¼ oz, and ½ oz. bags and prerolls. The pair’s other brands are available at hundreds of dispensaries throughout California, so expect the same with Farmer & The Felon. Fussell also serves as a core member of OSC2, an organization that works to bring society a bit closer to its vision of an organic sustainable community. Fussell thinks this is just another thing helping Farmer and The Felon in creating a healthier product and mitigating potential environmental damage.