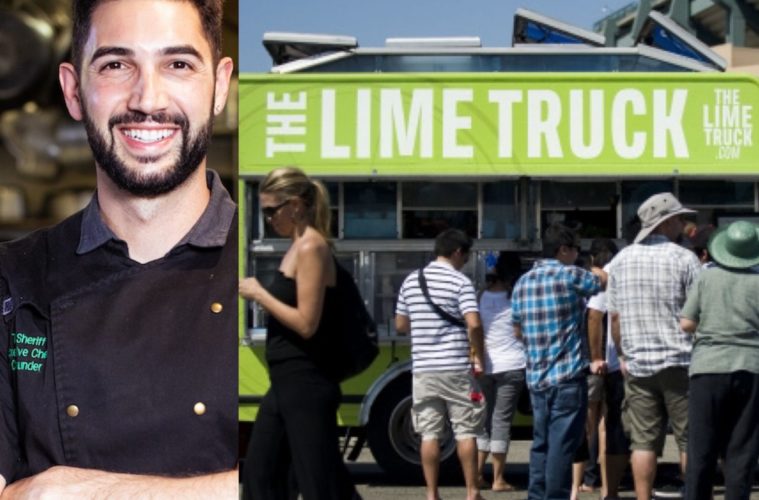 “Winning that was obviously huge, because it’s like the best-of-the-best food trucks,” Shemtob said to Irvine Weekly after claiming his victory. “It was so cool – the prize is $50K and a belt — the belt is pretty cool.”

Featuring Cal-Mex style fare, Born From The Lime Truck features all the well-known culinary staples – a California burrito, tacos, burrito and poke bowls, quesadillas, and heap of other tasty snacks all made from scratch, with an organic twist. Shemtob explained that sustainable growth remains a core goal for the future of Born From the Lime Truck. Shemtob hopes to achieve this goal through offerings like Aspen Ridge Sweet and Spicy Steak, Beeler’s Pure Pork Slow and Braised Seasoned Pork Belly, and Ponzu Marinated Shitake Mushrooms, and other sustainably-sourced eats.

“We’re going to open three more corporate stores — we went to doing scratch made tortillas, so I’m obsessed with masa right now, we have really sick masa in the store, right now. I just want to continue to do the best that I possibly can with what I’ve been given,” he said.

With Born From The Lime Truck’s second successful experience competing on the Great Food Truck Race, Shemtob’s latest culinary victory may seem like an impressive milestone, although he admits his sights are set on bigger opportunities away from the Food Network series.

A post shared by Born From The Lime Truck (@thelimetruck)

While winning this recent round of competitive cooking on Food Network has fueled this desire to expand, Shemtob confessed that his real passion lies within entrepreneurship.

As the co-owner of Hatch Yakitori + Bar in Los Angeles, and an ownership role in a service-industry footwear company, Snibbs, it is clear entrepreneurship is in Shemtob’s veins.

With Born From The Lime Truck’s roots based in Orange County, a brick and mortar at the Irvine Spectrum, along with Westwood, near UCLA, Shemtob has operated The Lime Truck since 2011.

Now, approaching the brand’s 10-year anniversary, Shemtob says the vision for his brand shifted in the sense that it no longer needs to be exclusive to Southern California.

In an interview with Irvine Weekly, Shemtob explained that the next phase for the Born From the Lime Truck concept is to introduce a coast-to-coast franchising model that will transport The Lime Truck’s organic, signature flavors across the nation. “I’m absolutely obsessed with entrepreneurship — there’s two conflicting things that pushed me to franchise; One, I have national media — which is really hard to get for restaurants and food trucks — especially in quick service,” he said. “Being able to say, ‘We’re the best of the best Food trucks, but I can only run it in Orange County and L.A. I want to give this to the world, especially because I’ve had it for so long — it’s tattooed on my body – it means so much to me — the idea of sharing it with the world, is the ultimate when it comes to entrepreneurship.”

Considering his leap into franchising Born From The Lime Truck, Shemtob adds that along with his passion for entrepreneurism, he hopes to find a common ground with other entrepreneurs through collaboration — an inevitable aspect of Born From The Lime Truck’s newly announced franchising opportunities, which Shemtob estimates will be a welcomed challenge.

“I love working with entrepreneurs, I love being an entrepreneur – I love helping other entrepreneurs, it might be considered intrapreneurship because I’m giving them the building blocks,” he said. “I understand there’s a chance that some of them will hurt the brand — that’s a given — but what I’m hoping, is for these people to excel the brand and make it better, and work together in collaboration.”

As a recipient of the Zagat 30 Under 30 Award in 2013, the recent The Great Food Truck Race Champion admits his 10-year residency in the food services industry has matured his way of thinking – with a direct result on how he chooses to build his menus.

“What’s the next 10 years going to look like;  and that’s where I got really inspired — I switched the menus, no hormones, no antibiotics — good quality meat, where I know the farmers,” he said. “I went to five meat alternatives, dropped some of the meat we use, because I want to be more sustainable — how do we do a better job for the world? It’s still tough, when packaging is $0.90 when you use fully-recyclable packaging, compared to the $0.15.”

Undoubtedly amped from the recent Food Network win, Shemtob says his current five-year plan for Born From The Lime Truck’s places 100 franchised stores across the nation.

To jump start his vision, Shemtob explains he has hired a restaurant operator that pioneered the sandwich building system that Subway pioneered.

“He’s probably a little bit too senior, but I’m like the visionary – but I want someone that’s just epic at restaurant operation,” he said. “I brought this guy who invented the assembly line at Subway and Chipotle — he invented it, that’s his claim to fame – he’s been doing it for a while.”