You guys, it’s pretty much time to go back inside. I’m still of the belief that visiting art galleries alone by appointment is actually one of the most covid-safe out of home cultural experiences you can have, and we’ve included some here. But the majority of this slate of art, dance, conversation, reading, and film happens online — and that’s something we should probably get used to again, for the next few weeks at least, if not longer. Fortunately, creatives have us covered. Incurable Nostalgia Dinner Party Conversation with Nung-Hsin Hu at 18th Street. Join artist in residence Nung-Hsin Hu and special guests in a virtual dinner party to mark the opening of her exhibition, Incurable Nostalgia. Guests will exchange recipes in advance and prepare the meal for the dinner conversation — then explore ideas around the taste of nostalgia, the smell of returning home, adapting to the new normal under the current uncertainty and anywhere else the conversation may lead. A short film screens Wednesday, December 2 at noon to Friday, December 4 at noon; register for the conversation to receive the four home recipes from each of the guests in time to make them. Zoom dinner and conversation: Thursday, December 3, 5-6pm; free. 18thstreet.org.

Gerhard Richter: Cage paintings at Gagosian. Gagosian is pleased to present Gerhard Richter’s Cage paintings from 2006 in both Los Angeles and New York. The presentation follows their inclusion, as a cornerstone, in the artist’s retrospective, Gerhard Richter: Painting After All at the Metropolitan Museum of Art in New York earlier this year. In conjunction with this key group of six paintings, a new group of drawings created by the artist on consecutive days over the summer of 2020 will be shown for the first time. Gagosian Gallery, 456 N. Camden, Beverly Hills; by appointment December 3 – January 30; gagosian.com.

Lynell George & City Librarian John F. Szabo in Conversation at Los Angeles Public Library. Lynell George, author of A Handful of Earth, A Handful of Sky: The World of Octavia E. Butler, is joined in conversation by City Librarian John F. Szabo about her new book and the award-winning science fiction writer Octavia E. Butler. This program will be streamed live on YouTube and Facebook. Thursday, December 3, 3:30pm; free; lapl.org. Rose River Memorial, Rose-Making Kit Pick-Up at Building Bridges Art Exchange. Opening December 11, a new installation by artist Marcos Luytens and Dr. Tilly Hinton is an immersive experience inspired by the symbolism of red roses. In the space, visitors will be invited to focus on a stark wall of hundreds handmade red roses — one for each Covid death in the area — while listening to music by Los Angeles composer Yuval Ron and taking solace in a meditative induction. Materials will be available for people to make a rose during their visit, or to bring roses they have made at home. Free rose-making kits will be distributed from the Bergamot Station carpark ahead of the opening, on Thursday December 3 from 11:30am – 4pm, or until supplies run out. BBAX, Bergamot Station, 2525 Michigan Ave., Santa Monica. buildingbridgesartexchange.org The New Bauhaus Screening & Conversation at LACMA. As the Nazis took over Germany, many of the displaced Bauhaus masters found refuge in the United States. In 1937, László Moholy-Nagy came to Chicago to start America’s most influential midcentury school of design, the New Bauhaus. The film’s narrative weaves original interviews with archival footage, voiceover, and stylized filming of documents and artwork. The result is a new perspective view of a man who was ahead of his time and is increasingly relevant in today’s contemporary art and architecture discourses. The New Bauhaus is a film about art, vision, and perseverance in a tumultuous time. A conversation with director Alysa Nahmias follows the screening. Friday, December 4, streaming 10am-10pm; lacma.org. Andy Moses at William Turner Gallery. In his first solo show since 2017, painter Andy Moses deepens and expands his unique relationship to materials and techniques, pushing physical and optical boundaries in expressive, fractal abstractions guided by the laws of physics and the power of radiant color. With saturated colors generating flickers and flames, and swirling eddies reminiscent of tides and currents, the trails of starbursts, or the courses of river deltas and the sweep of clouds from above, Moses’ special gift is for recreating rather than depicting natural forces, but always with the chromatic personality of a slightly psychedelic vision that never lets go of its actionist soul as a painted object. William Turner Gallery, Bergamot Station, 2525 Michigan Ave, Santa Monica; by appointment December 5 – February 10; williamturnergallery.com. Nicolette Mishkan: Sirens at Shoot the Lobster. Nicolette Mishkan’s paintings are portals into a utopia where land or sea legs are not required to venture the totality of the globe, where men are nonexistent, where violence only exists in the pleasure of bondage or as a rite of spring. In her cosmology, the mermaid swims through the symbolic order, exploiting her duality to tickle, provoke, and entangle her established relationships with paternal consciousness. Shoot the Lobster, 3315 W. Washington, West Adams; opening: Saturday, December 5, 1-7pm; by appointment through January 9; shootthelobster.com. Ben Sanders: Poppies at OCHI Projects. Sanders centers the Papaver somniferum or opium poppy flower in a series of new works. Abstract in their repetition, skulls, stems, flower buds and razors intertwine, mirror, and multiply, borrowing elements of one another to askew their own psychedelic anatomy. Hallucinatory colorfields of wonky blobs and swirls obscure the more sinister undertones of what would otherwise be a happy dystopia. OCHI Projects, 3301 W. Washington, West Adams; by appointment December 5 – January 30; ochigallery.com. 600 Highwaymen: A Thousand Ways at CAP UCLA. A Thousand Ways is a three-part work of experimental participatory theater that was conceived and created to arc across COVID-19 distancing — Part I is a phone conversation, Part II is a socially-distanced encounter and Part III is a public convening once it’s safe to do so. In each part, you are both the actor and the audience. Your words, actions, gestures, silence, thoughts, and willingness are the tools. With just two people, a telephone, a table, and a stack of cards, a new type of theater emerges — one in which the most intimate assembly can be profoundly radical. Part  I: Sunday, December 6, Sunday, December 13, and Sunday, January 24; Parts II & III still TBD; $25, limited to 150 tickets; cap.ucla.edu, 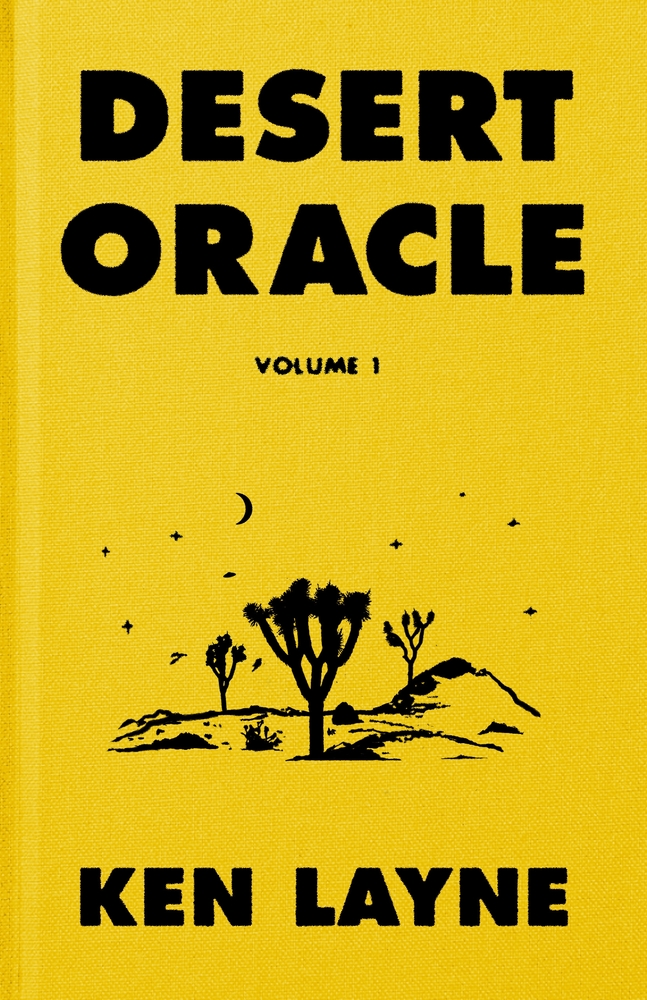 Ken Layne at Dynasty Typewriter. Desert Oracle, Volume 1: Strange True Tales from the American Southwest is a culty pocket-size field guide to the strange and intriguing secrets of the Mojave ― its myths and legends, outcasts and oddballs, flora, fauna, and UFOs. Straight out of Joshua Tree, California, Desert Oracle honors singing dunes, sagebrush trails, artists and aliens, authors and oddballs, ghost towns and modern legends, musicians and mystics, scorpions and saguaros, out there in the sand. Sunday, December 6, 6-7:30pm; $5; skylightbooks.com. Object Lessons at the Landing, offsite exhibition. Object Lessons, organized by Michael Slenske, utilizes an architecturally significant Gehry-world, old-school Venice loft environment to examine how a number of Los Angeles artists have worked with and incorporated functional/dysfunctional forms and concepts into their oeuvre. Visitors encounter Art Deco chairs by Larry Bell; a glass table filled with blue pigment by Lita Albuquerque; painted folding screens by Billy Al Bengston, Ed Moses, and Timothy Washington; tea cups by Magdalena Suarez Frimkess and sake cups by Joe Goode; a tripped out TV room with a sofa, chair, TVs and vacuum painted by Kenny Scharf; and all manner of carved and assembled wood furniture by Arnoldi in addition to many other historical works. Brooks & Speedway, Venice; by appointment through December 12; thelandinggallery.com. 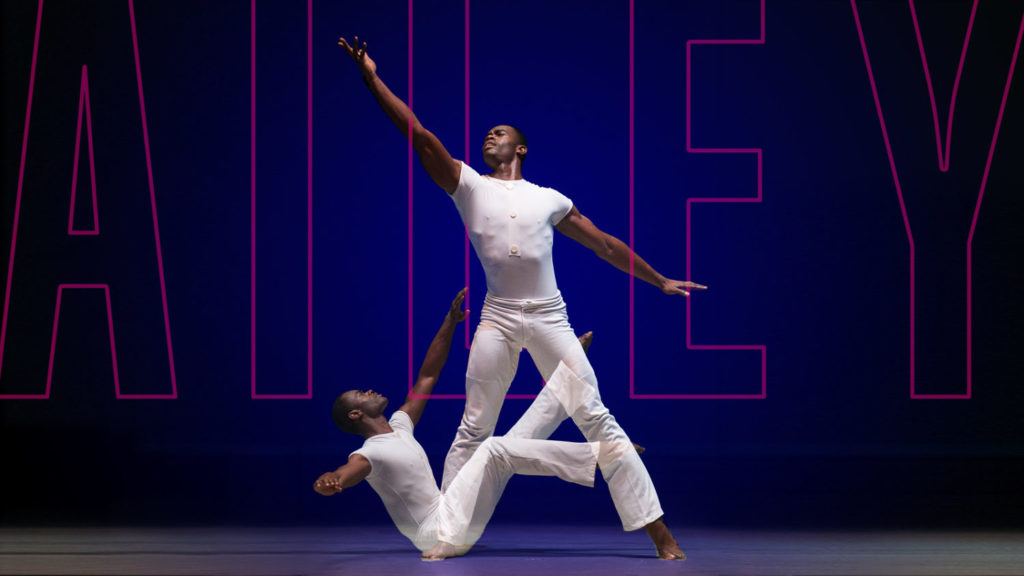 Virtual Winter Season at Alvin Ailey American Dance Theater. In the words of Artistic Director Robert Battle, “this season we look forward to joining with you on a journey of reinvention and reimagination that takes Ailey’s artistry to new heights with excellence, beauty, strength, hope, and love.” Celebrating six decades of Revelations, the season will elevate Ailey’s legacy of innovation and excellence with premieres, reinvented classics, interactive workshops, and a series of artist conversations. All events will be free to enjoy on the company’s website or on YouTube and Facebook, with no registration required. December 2 – 31; alvinailey.org.