New Year’s Eve is traditionally filled with promise and expectation. As we let that old, used-up baggage fall away from the last year, we look forward to a fun-filled future and insist on entering it with thunderous excitement. Whatever your vibe, we have a handful of picks to welcome the new Roaring ‘20s, ranging from glamorous and bedazzled to down and dirty rock & roll, from family-oriented to rated R. Whether you are seeking a spiritual and sober party or a top-shelf, all-you-can drink fiesta, here are some choices.

Ring in the New Year in the heart of downtown L.A. with a free all-ages dance party held in Grand Park and the Music Center Plaza. With eclectic bands and DJs spinning both urban and world music, a 3D light show projected on the side of the Los Angeles City Hall building, food trucks and midnight fireworks welcoming 2020, this outdoor bash is sure to be full of electricity. Grand Park and The Music Center Plaza, downtown; Tue., Dec. 31, 8 p.m.-1 a.m., free; musiccenter.org/NYELA

Grab your glow sticks and head to the Marina del Rey waterfront for a family friendly glow party featuring live entertainment, DJs, food trucks and a chance to countdown to the New Year twice. As the clock strikes midnight on the East Coast, the Times Square ball drop will be projected and fireworks will explode over the Marina del Rey harbor. When it’s our coast’s turn to welcome in the new decade there will be another countdown and fireworks display. Burton Chace Park, 13650 Mindanao Way, Marina del Rey; Tue., Dec. 31, 7 p.m.-mid.; free. eventbrite.com/e/marina-del-rey-new-years-eve-fireworks-glow-party- tickets-79792458391

Breath in the fresh air of the Pacific Ocean at Long Beach’s free Shoreline Village party featuring a DJ and live local band. There will be an early East Coast countdown for those needing to get the kids home to bed as well as a West Coast welcome, both complete with fireworks. Shoreline Village, 429 Shoreline Village Drive, Long Beach; Tue., Dec. 31, 7 p.m.-12:30 a.m.; free. shorelinevillage.com/new-years-eve-at-shoreline-village-2019-2020/ Dust off your honky-tonk shoes for a rockabilly flavored New Year’s Eve. The floor may not be covered in the expected sawdust, but the Burbank Moose Lodge has an old-school bar and dance floor that will conjure up a ‘50s juke joint. The music of James Intveld, Rosie Flores and Russell Scott & the Red Hots will surely get you swinging. Burbank Moose Lodge, 1901 W. Burbank Blvd., Burbank; Tue., Dec. 31, 8 p.m.; $25. eventbrite.com/e/new-years-eve-dance-party-w-james-intveld-rosie-flores-and-russell-scott-tickets-84845004693

Rev up your motor and get down and dirty with live music by New Zealand garage rockers The Cavemen and local L.A. scenesters The Premonitions. While guests are encouraged to wear masks, the Cretin Hop DJs will keep you doing the shimmy, the jerk and the frug between sets as you sweatily dance the New Year into existence. Zebulon, 2478 Fletcher Drive, Elysian Valley; Tue., Dec. 31, 8 p.m. $13. eventbrite.com/e/new-years-hop-rock-and-roll-masquerade-tickets-82278167213

The band Guided By Voices is known for both their slightly obsessive fanbase and their quirky songs incorporating musical influences ranging from psychedelic to progressive to British Invasion to low-fi punk. For the most hardcore fans and those interested in delving into the band’s prolific 28-album career, nothing could be better than this GBV marathon promising 100 live songs for 100 bucks. The Teragram Ballroom, 1234 W. 7th St., Westlake; Tue., Dec. 31, 8 p.m. $100. ticketfly.com/event/1854279-guided-by-voices-new-years-los-angeles/

Spend New Year’s Eve with a night of danceable pub rock in a comfortable dive bar environment. After a set by the Electric Children, The Tearaways will get your blood pumping, heart thumping and body moving to the beat of Blondie’s own whirling dervish, Clem Burke. Picked by Rolling Stone magazine as one of the “100 Greatest Drummers of All Time,” Burke’s energy pretty much summarizes the holiday season’s Twelve Drummers Drumming all rolled into one. The Redwood Bar & Grill, 316 W. 2nd St., downtown; Tue., Dec. 31, 9 p.m.; $10. eventbrite.com/e/in-fuzz-we-trust-new-years-eve-bash-with-the-tearaways- featuring-clem-burke-tickets-85585545671

Rock and Roll on the darker side this New Year’s Eve with Escape-ism, the solo project from The Make-Up’s Ian Svenonius and photographer Alexandra Cabral as well as Crush, featuring members of The Black Lips. Harvard & Stone, 5221 Hollywood Blvd., Hollywood; Tue., Dec. 31, 9 p.m.; $25. eventbrite.com/e/new-years-eve-with-harvard-stone-2020- tickets-84349845659 Giorgio’s NYE at The Standard

If you’ve got fantasies of turning your New Year’s Eve into a slice of tiki paradise, consider a mini-vacation at the oceanfront Golden Sails Hotel in Long Beach. Their PCH Club lounge features live rockabilly and surf bands Big Sandy & His Fly-Rite Boys, The Hula Girls and Jason Lee as well as an optional Hawaiian Luau Buffet, tropical drinks and a midnight toast. Stay on the premises with a special room rate and you’ll be within stumbling distance of a good night’s sleep. PCH Club, Golden Sails Hotel, 6285 E. Pacific Coast Highway, Long Beach; Tue., Dec. 31, 8 p.m.; $29.75 and up. $89 hotel room rate. goldstar.com/events/long-beach-ca/new-years-eve-rockin-luau-party-tickets The Queen Mary creates a New Year’s Eve experience spread across the ship with multiple themed decks, lounges and ballrooms. Special areas include a Latin cumbia band with samba showgirls, a glow bar playing electronic dance music with LED hula hoopers, an eight-piece jazz band, a country hoe-down and a secret Capone speakeasy. A fireworks display will greet the New Year on the veranda deck at midnight. The Queen Mary, 1126 Queens Highway, Long Beach; Tue., Dec. 31, 8 p.m.; $120 and up. queenmary.com/calendar-of-events/new-years-eve/nye/

Perched high in the Hollywood Hills, the breathtaking view from Yamashiro restaurant is a sight to behold with twinkling lights below and an abundance of romance. Throw in a five-hour open bar, a DJ and a dance floor and you’ve got yourself quite the New Year’s Eve party. Yamashiro, 1999 N. Sycamore Ave., Hollywood; Tue., Dec. 31, 9:30 p.m. $175.; eventbrite.com/e/yamashiro-nye-20-new-years-eve-party-tickets-74772451415 Starting off the new year with a #BOOM (Melanie Chapman)

#BOOM! An Alcohol- and Drug-Free Extravaganza

If you’ve committed to an alcohol and drug-free lifestyle, New Year’s Eve has the potential to be a pretty major stumbling block. Celebrate without the drama or the spilt vodka by joining 700 to 1000 other revelers while dancing to a fabulous DJ and ringing in the New Year with a non-alcoholic toast. West Hollywood Park Auditorium, 647 North San Vicente Blvd., West Hollywood; Tue., Dec. 31, 8 p.m.; free. weho.org/Home/Components/Calendar/Event/21550/15

Providing a mixture of art deco, streamline moderne and Mission Revival architecture, Union Station may be one of the most fitting places to welcome in the new Roaring ‘20s. Now in its eighth year, Prohibition NYE explores the grandeur of the jazz age with burlesque dancers, a red hot musical jazz combo and an open bar serving champagne, wine, beer and specialty cocktails. Guests are encouraged to dress in 1920s vintage or modern formal attire. A 60-foot ball drop will countdown to the next ‘20s era. Union Station, 800 N. Alameda St., downtown; Tue., Dec. 31, 9 p.m.; $175. prohibitionnye.com Taking over three levels of downtown’s Globe Theatre, this New Year’s Eve party is billed as a night of queer magic and faggotry. With laser light projections, a spectacular stage show and more drag queens then you could shake a feathered boa at, midnight will culminate with a massive makeout countdown and a laser light confetti explosion. Globe Theatre, 740 S. Broadway Ave., downtown; Tue., Dec. 31, 9 p.m.; $20 and up. globetheatre-la.com/events/new-queers-eve-2020 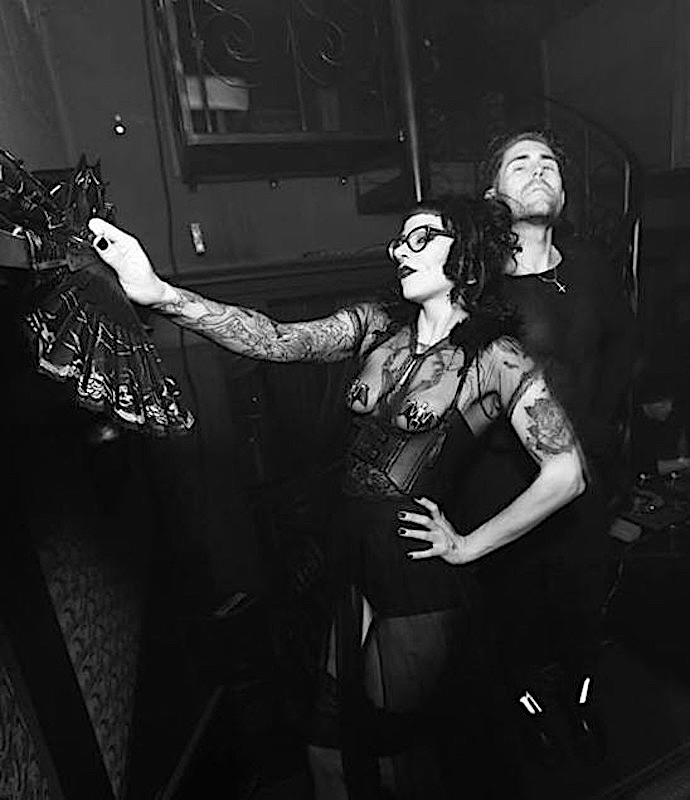 This New Year’s Eve non-members get a chance to experience Cloak & Dagger, normally a private member dance club which focuses on magick, sorcery and rocks to a slightly darker beat. The club’s dress code is usually all black, but silver is also invited for this special NYE party. Hosted by DJs Adam 12 (one-half of the band She Wants Revenge) and Baby Magick, a ritual will be conducted at midnight to let go of the past decade and to let in the new one. Along with a complimentary champagne toast, free prosperity bags will be given to everyone. Cloak & Dagger, 1666 N. McCadden Place, Hollywood; Tue., Dec. 31, 9 p.m.; $25 and up. xcloakanddaggerx.com

If your New Year’s resolution includes investing in your spirituality, this sleepover might be wiser than an all-night dance party. At the Yogi Tree Center for Growth, New Year’s Eve begins by setting intentions and is followed by yoga, chanting, meditation, and Reiki, concluding with a special sound bath. New Year’s Day 2020 starts by waking at 5 a.m. for a morning meditation and is followed by breakfast. The Yogi Tree Center for Growth, 4475 Vineland Ave., Studio City; Tue., Dec. 31, 8 p.m. to Wed., Jan 1, 9 a.m.; $75. eventbrite.com/e/new-years-eve-dream-temple-tickets-80751338427