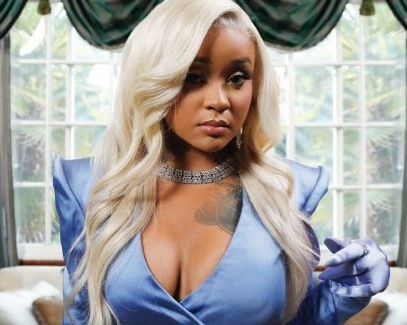 Stunna Girl is Totally Ratch: Sacramento artist Stunna Girl has released a new single and video called “Ratch.” The video has something of a period drama feel to it — Stunna is in a stately home surrounded by peeps in powdered wigs and ball gowns. 42 Dugg offers some male vocals to create a cool counterpoint.

It’s a badass tune — Stunna rapping the verses and then dishing out the chorus with a ton of sass and swagger. Her star is only going to continue to rise.

According to the press release, “The video for ‘Ratch’ brings Stunna Girl’s lightning rod personality to the forefront from the onset. Flanked by members of what could be a royal family, Stunna crashes the party and brings the ‘Ratch’ to what would ordinarily be a serene, discrete setting. Her energy is infectious, and before long even the white-haired elders are turning up with Stunna, acting in ways that conflict their appearance. It’s all fair game in Stunna Girl’s world though, from inside the quaint mansion to its courtyard, where 42 Dugg joins the festivities and turns a calm painting session into a club scene with ease. Stunna has been a reliable source of energetic anthems to start her young career, and ‘Ratch’ only adds to her successful catalog.”

Stunna Girl is Totally Ratch: The “Ratch” single is out now.

Press bio: “Born and raised in Northern California, music offered a refuge from a tragic home life. After dealing with a tough upbringing, which saw her having to balance family problems with her own, she knew that she could draw upon her life experiences as creative fuel. Stunna Girl came out of the other side with a newfound sense of confidence and focus, diving headfirst into fulfilling her long standing musical dream. In 2019, she became a major player in the local Sacramento music scene and made waves with her independent debut album, YKWTFGO. When the #RunwayChallenge organically exploded on TikTok, she inspired a viral movement facilitated by millions of videos by fans and influencers such as Nikita Dragun, and more. The song proved so gripping that by the end of the year, TikTok proclaimed her as the fourth top artist on the platform for the year, behind only Lil Nas X, Mariah Carey and Lizzo.”