A wacky and wondrous retail space meets art installation, Peggy Noland’s 4-year-old Echo Park store was always a joyful treat for the eyeballs, especially while enduring many a sluggish, traffic-jammed journey past it along busy Sunset Boulevard. Noland’s nest-like space burst with otherworldly whimsy — giant green styrofoam hands (with hot pink fingernails), cartoony bodybuilding babe figures, oversized stuffed animals galore and so much more — showcasing her ideas, selling her colorful clothing designs and, as she says during our chat inside her teddy bear sculpture-packed Hollywood apartment, serving as a billboard of sorts for her work. Though she closed the Dodger Stadium-area shop a few months ago, the artist who first made a name for herself in Kansas City, where she’s from, with another self-monikered store (also now closed and also known for changing themes inside and out — inspired by clouds, polka dots, lipstick, burgers, tinsel, the mall, and anything that appealed to her kooky and kaleidoscopic mood over the years) isn’t slowing down. In fact, she’s revving up, embarking on new artistic adventures that are as public and visual as her retail space was — maybe more so.

Though her studios/storefronts allowed her to define herself “on my own whim” and “fake it as [a] ‘store-store’ when I needed to,” Noland’s thinking in more mobile terms as of late. Her current preferred canvases are cars. As part of her YouTube series Peggy’s Cartoon-Up!, Noland — who has done set design for film and TV, bands and even decked out stages at Coachella — has been modifying cars in gorgeous, gaudy and glitzy ways. First came the Powerpuff Girls truck she did for her friend Anna Dewey Greer. (Greer was the previous proprietor, along with artist Christine Stormberg, of the Sunset store space with their shop Dog Show, which had a giant unicorn head above its door; Noland now has it in her living room.) 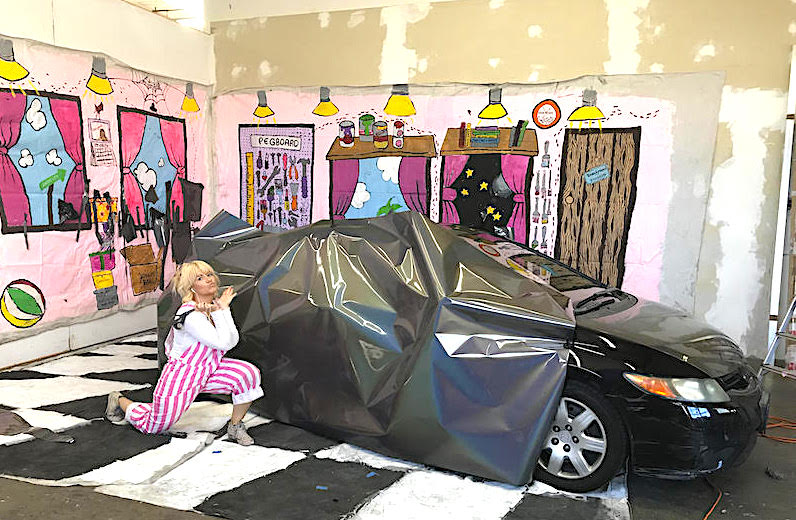 The car projects gave Noland something to focus on while she decided what to do after closing her two stores. “I was negotiating these transitionary feelings,” she says about her audacious auto body work, which she’s been doing for three years now. “Obviously the TV show Pimp My Ride is the original inspiration. A lot of times cars are the most expensive things that people own. And I don’t even own a car, mostly because of finances.”

Noland says her perspective as an artist versus a “professional” car customizer working on big investment pieces like cars “feels subversive,” and the idea behind using this medium is still very DIY and experimental for her.  “I love cars because they are, um…,” she pauses cutely. “What am I saying… I don’t love cars but you’re in your car all day so you might as well love it. That’s what I mean to say!  You know, there’s only boring options out there.  And most people don’t want a pink and sparkly car, but some people do and a lot of them are in L.A.!” “It’s a fun extension of what I would be doing in my studio anyway,” Noland adds.  “And it serves another purpose, when we were trying to shop the show around to production companies and stuff, they told us that the category of television it would fall into was wish fulfillment. It made my heart melt to know that I was working as this kind of fairy godmother doing wish fulfillment… What a special feeling that is, to give people like an ‘oh my god’ moment.”

Designing clothing for music artists — including CSS and Beth Ditto, to name a couple — and bringing that level of flashy cool to public retail, her fashion work kinda did the same thing. Still, the sheer size and costs of materials means cars are a lot riskier, and she seems to thrive on the challenge. “With most of my other mediums, I’m showing up with a hot glue gun and some yarn. You know, it’s like the cheapest approach. This is a very costly thing to even begin to get the materials to experiment with,” she explains, pointing to photos of her most recent piece, a holographic contact paper-“wrapped” car that utilizes materials used by automotive designers rather than her usual craft stores. “Basically, like a door shape could be a $300 sheet of contact paper and you got one shot to get it right — if a wrinkle or an air bubble gets in, that’s like a $300 mistake. So doing this asks you to really learn the material and makes you care, whereas with the rest of my work, I’m like purposely sloppy and going for a handmade look.” Car culture — like shopping culture — is a ubiquitous and defining thing in Los Angeles, and Noland has rather organically fallen into playing around with both, cleverly celebrating yet challenging what they mean. Her L.A. store wasn’t really open very often, but when it was it was an experience, the kind of place that you wanted to take pictures of and selfies in (in this way, her campy rainbow-glitter fun-fur aesthetic was sort of a precursor, at least in the retail realm, to the whole selfie “pop-up” backdrop trend). Now working on cars, she is tweaking  and tripping out one of our most functional possessions, something that many view as a status symbol; only the truly eccentric dare to defy convention with cars in terms of color and design (think Angelyne’s pink Corvette).

Even those of us who consider ourselves beyond basic tastes don’t go as far as Noland does with cars (leopard seat covers are a mere baby step). The artist has always pushed boundaries with whatever she’s created and expressed her ideas in bold, over-the-top ways. This includes her personal style (check out her popular Instagram for some visuals, including her clothing and groovy hairstyles over the years). Though Noland says she loves objects and making objects, she doesn’t love “art being commodified,” which of course happens in traditional gallery spaces, stores and online. With her car project, she seems, for now, free of those concerns, and this bold babe is rolling with it. L.A. would be a happier and more vibrant place if we all followed.