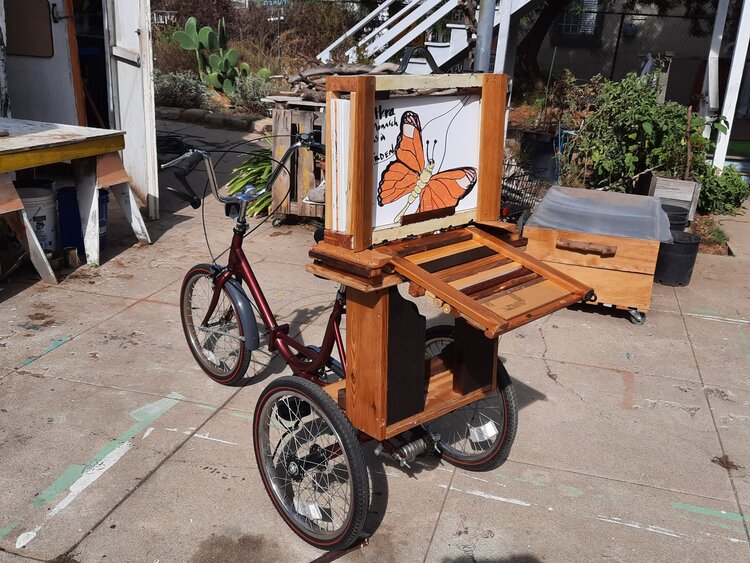 Humans love stories. We love to tell them, hear them, remember and invent them, starting from childhood and lasting until forever. In a way, no one loves stories more than kids. In recognition of this love, the importance of arts in education especially early on, and the need for creative ways of building a more just and inclusive society, in 2018, L.A. County Library became one of the County Department of Arts and Culture partners in the Creative Strategist-Artist in Residence (Creative Strategist) program.

A series of departmental artist residencies in departments from Arts & Culture to Mental Health, Parks and Recreation, and even the County Clerk, the Creative Strategist program in the libraries took an especially inventive turn, with visual artist Alan Nakagawa and poet Rocio Carlos developing the enchanting Kamishibai project at five branches. Literally meaning “paper plays” in Japanese, this retro DIY form of street theater was widely popular in the early 20th century, as a whole genre of travelling performers made a living moving between towns, entertaining crowds.

Imagine a cross between a Punch & Judy show and that scene from Love Actually with the love letter on the big index cards, except each play is stored in a handcrafted ornamental proscenium box reflecting the aesthetics, available materials, and personality of the performer. The cards contain illustrations, scenes, and actions from within the play, and are switched out as the story progresses. The boxes are transported on small carts and on tricked-out bicycles, custom-made to transform into a playbox as the crowd assembles. While the Kamishibai project’s website has turned several of these into videos, it’s easy to imagine the old-timey town square excitement of the arrival of a theater bike in a village or neighborhood — and there was always candy for sale at the end.

In the libraries, Carlos worked with the students on the stories, while Nakagawa designed, fabricated and collaborated on a Kamishibai theater-box for each of five workshops. Each of the pieces remain on display at the branches, as well as a traveling Kamishibai bike worthy of the beloved tradition. An interdisciplinary artist himself, Nakagawa’s interests in sound, video, sculpture, performance and food center on experiential aesthetics, while Carlos’ literature soars in its passion for community. Together with Ana Chaidez, the pair made a sample of Kamishibai, Mothra the Monarch, which relates the adventures of a migrating papillon navigating a challenging ecological environment — and actually, there is a recurring theme of urgent environmental engagement which runs through many of the library pieces.

The Claremont Helen Renwick Library’s Claremont Bees was made by participants from the Friends of the Claremont Library and art students from Claremont High School. This particular theater was specially created by artist Lauren Verdugo at the Sam and Alfreda Maloof Foundation; its story is an appreciation for natural beauty and the need to protect it. Similarly, Clifton M. Brakensiek Library’s 150-Year-Old Tree, created by members of the Kingdom Causes community center, tells the life story of a remarkable tree and its treasured, protected status as a living member of the local community.

At Willowbrook Library, Willow Loves Willowbrook by staff and community members, is a cheerful appreciation for the close-to-home marvels of a neighborhood full of friends and fond memories, told through the eyes of a free-spirited young girl and her skateboard. Topanga Library’s Their Way Home, by students at Topanga Elementary Charter School, is an unexpectedly moving story of a little piglet who is immigrating and becomes lost and makes friends and finds its home. While at Quartz Hill Library students from the Antelope Valley Union High School District Princess Knight, Wolf, and the Alien give us a rousing adventure that’s part fairy tale, part knight’s quest, part science fiction, and ultimately, a plea for peace and environmental justice that extends across Earth and into the universe.

For more information and to view the Kamishibai videos, visit lacountylibrary.org/kamishibai.