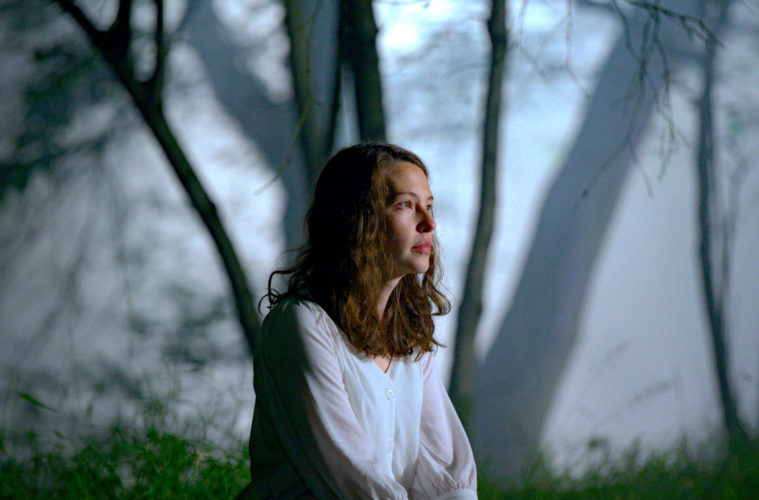 The new Welsh horror film The Feast works hard at distinguishing itself from the indie-freakout renaissance we’ve got going right now, beginning with its studied, elliptical visual maneuvers, abstract close-ups and cut-off compositions. A drilling rig in a field; a worker staggering off bloodied; a woman peeling off a black mud mask. The camera crawls and stalks like a cop dusting for fingerprints. Gradually, glacially, we’re introduced to a wealthy family in a hip minimalist-IKEA house – mom, dad, two grown sons – each involved in some variation of narcissistic indulgence. A dinner party is pending. A strange girl arrives.

Lee Haven Jones’ film falls into the new subcategory of folk horror – but not for quite a while. For most of its length you’d be hard pressed to exhume any genre stuff at all, merely  oddness, and a deliberate mood of impending disaster. The slow burn focuses on Cadi (Annes Elwy), the mute girl who arrives late for her servant gig at the house, with wet hair and an apparently unremarkable lack of expression. She also sometimes – sometimes – leaves trails of soil behind her. The family, all poisonously self-obsessed, never notice. Glenda (Nia Roberts) is the nouveau riche mum, loving her brick sauna room and fussing about the canapes. Gwyn (Julian Lewis Jones) is the cocksure, rabbit-hunting dad, whom we soon learn is a corrupt Parliament member, as the clan usually lives in London.

One son, Guto (the rather Dinklage-y Steffan Cennydd), is a glowering junkie on a parent-enforced respite from drugs and city life; the other, Gweirydd (Sion Alan Davies), is a preening triathlon trainee with –as we slowly learn– a history of sexual predation, as if we don’t see it all over him. Cadi watches this snake pit of dysfunction impassively but unblinkingly – fuzzy hints are dropped, but exactly what sort of semi-metaphysical catastrophe is coming remains a muddled and vague matter. All we know for sure is that these exploitative users and abusers are gonna get it.

They do, in lavish gross-out ways that include maggots, cannibalism, and the strategic vaginal placement of a bottle shard. A subtitled Welsh horror film might seem like a novelty to us, but back in the mamwlad (homeland), Welsh language TV has always had millions of viewers no matter the genre. In any case, Jones’ film could’ve been set anywhere that has oligarchical bourgies enriching themselves off the locals and the land; or where young filmmakers  might hope to seduce the genre market. It would’ve helped to settle the folk particulars, which feel pretty arbitrary, and attend to narrative rather than seek out weirdnesses that go nowhere. Cadi leaves the party to commune with CGI roots in the dark forest at one point, who knows why, and several characters insane for unclear reasons.

Of course, it’s the revenge of the earth upon its malevolent human succubi that’s supposed to be the righteous takeaway, if that plus a few gallons of NewRuleFX All-Purpose Stage Blood is all you’ll need for your time. Neither movie-beautiful nor movie-homely, Elwy has one of those faces that seems to change with every angle, but the film around her could use a rewrite and a vitamin shot.