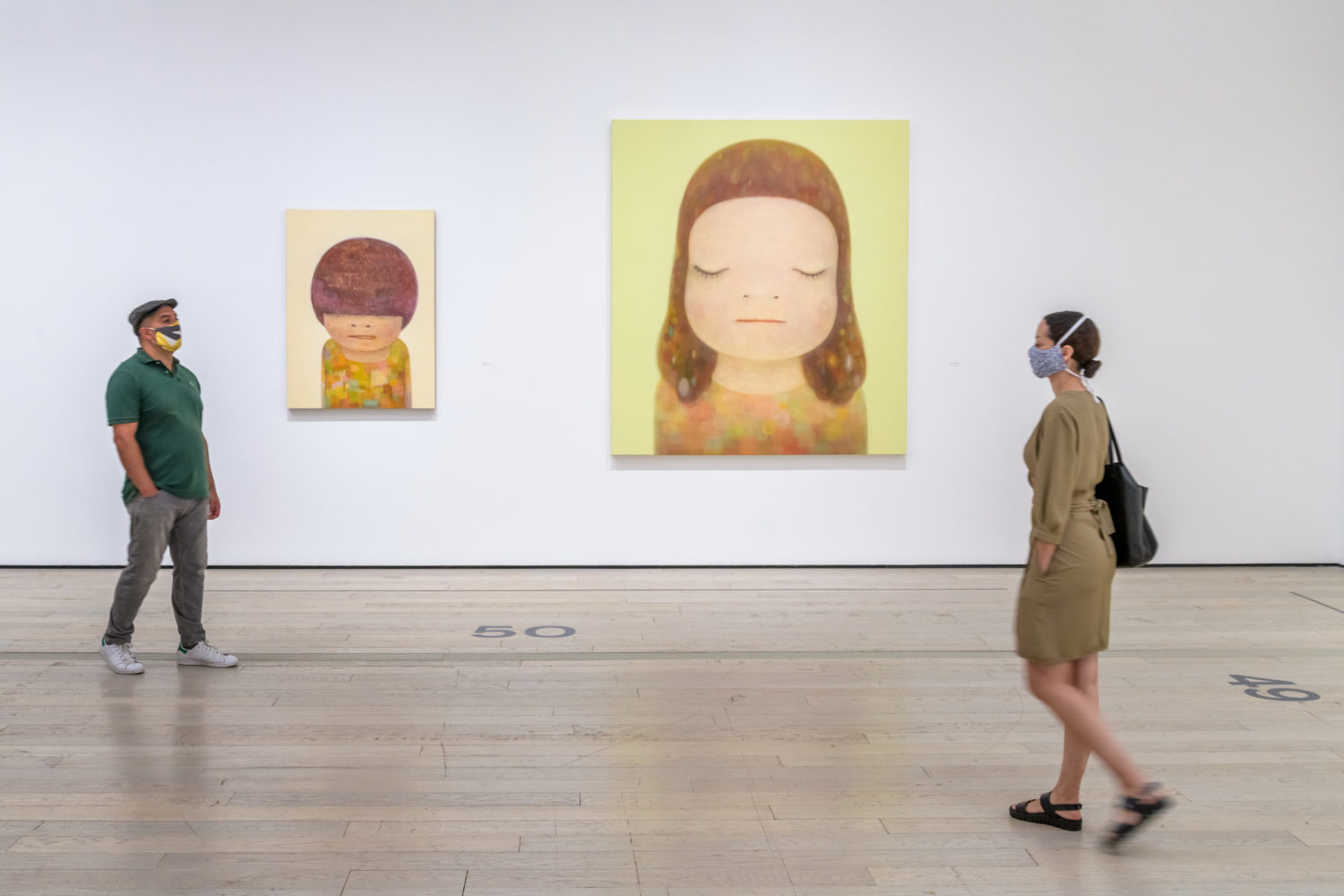 Yoshitomo Nara’s hyperstylized portraits of wide-eyed girls with cosmos in their irises, quirky bangs and an aura of menace and of secrets kept have become wildly popular around the world in the last three decades. Their particular infusion of Japanese aesthetic flair with color-blocked quasi-abstraction and an off-kilter sense of eternal youth has generated a veritable army of figures. Nara has painted into being an entire population that shares an iconic format but expresses distinct personae through prolific variations on the theme and the occasional incursion of punk rock, animal spirits and lately, politics.

Surveying Nara’s practice from 1987 to 2020, LACMA’s newly opened exhibition offers not only an impressive assembly of the large-scale paintings, but also drawings, intimate monumental sculptures, eccentric ceramics, extensive process materials and heretofore unexhibited preparatory sketches, and an eminently instagrammable environmental installation that recreates his drawing studio. But the premise of this curation is articulated at the outset by none of these — but rather, by a mural made from album covers in his decades-deep record collection.

Throughout the exhibition, the focus on Nara’s inspiration in music recurs in works both sketched and drawn and in many of the featured and famous highlights. There’s even an Exhibition Soundtrack, created by the artist himself to accompany the sculpture studio cabin, My Drawing Room (2008). Nara selected songs that reflect his love of 1960s and ʼ70s singer-songwriters. (Tip: Though it’s intended to be enjoyed with that particular work, if you’ve got your ear buds it makes a great accompaniment to the entire exhibition, and actually it’s just a great mixtape in general.)

As for the paintings themselves, it’s a strange, almost uncanny phenomenon to see so many of them gathered in one place. It’s sublime to contemplate each one of them, so frequently and ubiquitously reproduced in magazines and merchandise, in the fullness of their large regal scale, the depth and texture of their bespoke color fields, the wavering expressivity of their lines, the world of detail embedded in each girl’s eyes. But even as the proximity of this gathering has a power — a kind of gravitational pull — it also in a way takes the drama, the sense of strange surprise, out of each encounter. It reinforces the armature, what could almost be called a formula, behind the best-known embodiment of the artist’s vision.

A series of sculptural works punctuate the galleries — a giant bone-white set of stacked tea cups which is also a fountain fed by its figures’ tears; a 26-foot confectionary painted bronze sculpture installed outside of BCAM facing Wilshire Boulevard, next to Urban Light; a metallic, aged head with a distressed surface that still gleams like an unearthed remnant of an ancient ritual colossus; and of course the charming playhouse-size recreation of the artist’s exuberantly untidy drawing studio. Festooned with scattered source materials, untold hundreds of carefully collected tchotchkes and talismans, and mark-making materials, its storybook aura is also a bit chaotic. Beguiling and delightful, hectic and jam-packed, one gets the distinctive sense that it is actually a model of the inside of the artist’s head.

This work’s highlighting of the primary role of sketching in the artist’s creative process speaks directly to the most unexpected aspect of the overall exhibition — drawing. An enormous amount of square footage throughout the entire exhibition is dedicated to the presentation of drawings, stretching across thirty years of working out ideas, perfecting characters, and conceptual, encoded notetaking. It is in these drawings that the DNA of Nara’s musicology can be seen taking root from an early age, even from his adolescence. They are quick and urgent, childlike and sophisticated. There are seemingly thousands all told, and together they reveal the thoughts, stylistic evolution, and most importantly the active, present hand of the artist to an even greater degree than the finely finished works in the leading roles. In their fierce and quiet portmanteau of memories, you can just about hear the vintage Bowie blasting in the background.

EXTENDED: Yoshitomo Nara is on view by timed ticket reservations through January 2, 2022 at LACMA. For more information visit lacma.org.