Weirdos, outcasts, punks, goths, queens, new wavers, ravers and fashion/music eccentrics didn’t have the vast array of options they do today in terms of style and self-expression. The internet only really became a place to shop sometime around ‘94, and department and mall stores rarely reflected what was happening in the streets. In the U.S., if you wanted the dramatic, edgy looks you saw in rock mags and zines you had to make them yourself or travel to London.

Until Retail Slut came on the scene, that is. The quirky boutique epitomized the irreverence and rebellion that made us all want to go to Melrose in the ‘80s and ‘90s, and ultimately helped make the avenue world famous. Over-exposure (remember Melrose Place?) and exorbitant rent hikes signaled its decline, but it’s safe to say the internet killed what was once a very magical place. Save for a few sneaker shops and vintage stores, the avenue has lost the pizzazz of the past. Still, for those of us who frequented the street turned shopping mecca, a drive down the stretch between La Brea and Fairfax is not without formative and fabulous flashbacks. We first went to Melrose in junior high and were forever changed. With a bonanza of recent birthday cash we bought our first pair of pointy buckle boots at Flash Feet, some stickers at Vinyl Fetish and some fishnets at Retail Slut. It was the ’80s, and we were discovering our dark punk proclivities, reflecting it on the outside for the first time. After that we’d go to Melrose often. Sunset Strip’s neo-glam bands were exploding, as was the death rock scene (nobody used the word goth) at clubs like the Scream in Downtown. At the time, all the cute rock dudes we saw in the clubs would be hanging out on Melrose during the day, flyering for their gigs or working at the trendy shops. (For more on this era, watch Desi Benjamin’s documentary Scenesters –which we make a brief appearance in– on Amazon).

Retail Slut in particular had the best known rocker boys behind the register; so much so there was even a “Boys of Retail Slut Calendar” for sale at one point. Francios Haroldson from the band Motorcycle Boy and Taime Downe from Faster Pussycat worked there, and surely we weren’t alone visiting the store to see them in all their guy-linered, messy-tressed splendor as teens.  A decade or so later, we got a job at a store on Melrose called Black Market (which was kinda like a gothic indoor swap meet) and manned the counters at natural history/”dead stuff” shop Necromance and rock designer Terri King’s storefronts, a small step toward living the lifestyle we admired from afar, before ultimately getting to write about it all as a journalist. Some of our closest friends worked at the Slut up the street as well as Soap Plant (read our piece on its owner here). Ultimately when we left retail to write full time, our first article in the LA Weekly was in fact about Melrose.

Anyone over 40 who skews toward alternative style in L.A. probably has similar memories about the avenue and in particular, the “Slut,” as regulars call it. Danny Fuentes of Lethal Amounts most certainly does and he’s joined forces with Helen O’Neill, the visionary behind the infamous store, to pay homage and maybe even educate a new generation. This past weekend they hosted a pop-up store recreation, art show and merch line launch party celebrating the bodacious boutique. 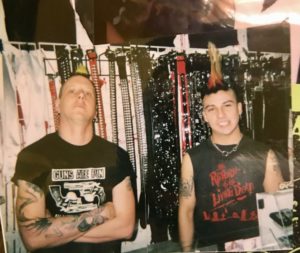 “Retail Slut was an institution, a rite of passage almost,” Fuentes, who was just a kid when he first shopped there, says. “I don’t even know how I knew about the place other than somehow I knew about it and had to go find it. Almost a myth of some sort it had a mystique and an element of danger that its reputation seemed to precede it. It felt as though it was always there and was never going to leave, an artery of the many underground scenes it fostered in those narrow four walls. I was lucky enough to work there and see its amazing charm from the inside out. When it closed down, it felt like a rockstar that you love had died. It was sad and really felt like it marked the end of an era and sadly Melrose really did die for me after that. “

It did for a lot of us. While the store went through a few different phases throughout its multi-decade existence and even changed hands in terms of ownership, it was the early inception and creation under O’Neill that was truly game-changing. The store is culturally significant enough to have its own Wikipedia page, which references some of the lore surrounding it. We’d wondered about the Dayglo hand-painted scooter that was out front like a weird piece of sculptural art. O’Neill says that one remains a mystery. But the best known Slut story was always about Slash: that he stole his signature top hat from the store. The other biggie is that Michael Jackson’s bondage belt and bracelet from BAD was purchased at the shop. Both are true, but O’Neill says the Slash story (as shared in his autobiography) was exaggerated. Guns n’ Roses hung there a lot and before and after they became successful, they bought a lot there too. “They’d come in together and put their money together, ‘like ok we’re getting a t-shirt, hair dye and a bracelet,” she recalls. She thinks they got a lot one day including the top hat and an admiring employee apparently gave them a very good discount.

We met up with Helen last week in Echo Park to reminisce about both our heydays on Melrose, prior to Lethal’s pop-up opening. She moved to Ventura after she sold the store and has been doing a lot of equally creative things– traveling, Burning Man and stays at her favorite nudist colonies. But her time as a store owner has proven to be most impactful.

“Remember when there used to be no black clothing anywhere?” she asks. “Like I had to go downtown and buy stuff for Mexican widows, or sometimes we’d dye stuff. That’s why that whole Koala Blue thing [Olivia Newton John’s store, which in some ways put Melrose on the map] would irritate the fuck out of me. Nobody wants white!” Rockers sure didn’t. And as MTV started to influence Gen-X teens more and more, a lot of us saw the shop as a haven. What most of us didn’t know was the store was actually where the people in the videos were going for their looks to begin with. From those black rubber bracelets that many still associate with Madonna’s early look (but were actually a staple before that via Chicana and “chola” fashion) to Manic Panic and Crazy Color hair dyes to Ape Leather brand bondage gear to weird, hard-to-get t-shirts to skull-print everything, Retail Slut was where you bought things to disturb and distract the normies. But O’Neill says she never opened the store to be “specifically punk or goth.” Rather she wanted it to be a place where creatives and artists could simply sell their wares– cool, different and expressive wares.

“It was underground fashion,” she says of how she described the store in its early days. “I tried to support the underdog and the underground. That was my thing. I also had a store in Ventura called Wild Planet afterward for 10 years and I was doing the same thing. “

O’Neill acknowledges that it’s a different world now, with nearly anything anyone could want available on the web and sites like Etsy, but she still thinks there’s room for unique brick and mortar retail outlets too. The success of Fuentes (who was briefly an employee at the Slut) and Lethal Amounts, which sells clothing and merch alongside art, proves it. The pop-up’s opening this past weekend also proved that old freaks never die and new ones want and appreciate the real deal much more than easily accessible, over-merchandised Hot Topic galleria garb. The place was packed and much of it is close to selling out. In particular, we must mention the Lip Service collab portion of the line which features the ubiquitous ’80s skull dagger print on tops and leggings. Drew Bernstein (who died in 2014) and L.S. defined rock style in the early ’90s. It turns out his early days selling stuff at the Slut helped shape his aesthetic, as O’Neill says she would often suggest designs to try based on customer feedback. Eventually everyone was wearing the brand. Similarly, Serious Clothing, which had a big presence on Melrose in the early 2000s, only came about because its head designer made some stuff for the Slut that did well. Both brand’s pieces can be seen all over music videos of the eras, as can O’Neill’s own Retail Slut line, also referenced in the new Lethal drop.

One of the most popular pieces so far is the infamous store logo depicting a happy face as a vampire. At the pop-up, Pink Panther Tattoo offered customers a chance to get it on their skin forever (or the equally recognizable Lethal Amounts “LA” safety pin design) for 50 clams. But where did it come from?

“It was the one good thing I got out of my marriage,” O’Neill says of the design she and her ex husband created. “He was a layout artist at LA Weekly.” 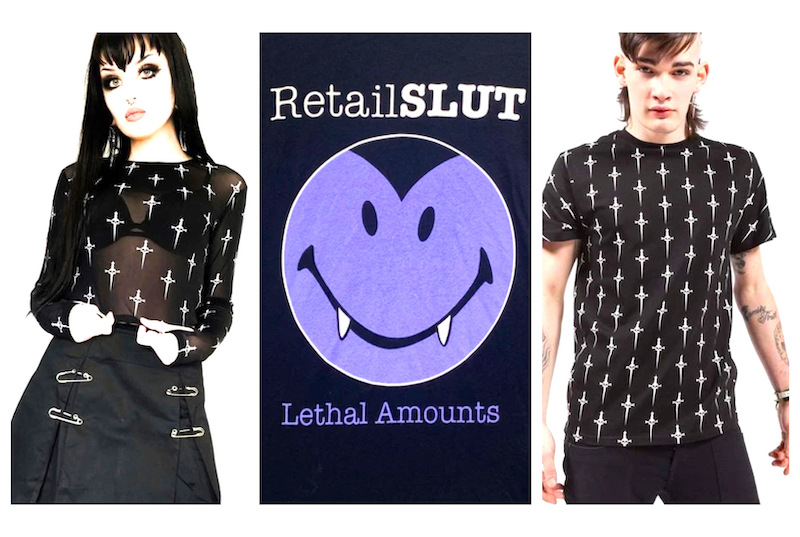 The Weekly in fact, had a few connections to Retail Slut. O’Neill says she advertised her store in the paper often, “usually the club section,” and many of the venues she did promotions at were also big in terms of ads and attracting attention with editorial coverage, first in the original scene column La Dee Da and later in this writer’s own nightlife column, Nightranger. Popular dance party Coven 13 for example, had a  “Gothic Beauty Pageant” we covered in the calendar section of the paper a few decades ago.

After O’Neill left the store it had several more years under other ownership until it closed 2005. She got more into nudism and nature-driven interests and still is. “I’ve always been a tree-hugger,” she says.

Alternative lifestyles and the diverse ways of representing them made the vibe of the store feel very inclusive. You never felt like you weren’t cool enough to shop there and that wasn’t always the case on Melrose. O’Neill was always friendly to everyone no matter what they looked like or wore, and despite the in-your-face styles for sale and even the store’s name (before a new generation took back the word, the store used “slut” to convey excess and fervor) manifested a certain punky passion that remains to this day.

“Retail Slut inspired me in many many ways and I felt like I had to pay homage in some manner with my business,” Fuentes says of the pop-up (which features a recreation of its storefront and new merch reboot all month long). “What Helen created in 1983 is nothing short of a work of art. Walking into Retail Slut felt like true freedom from everything. Sexual identity, gender, race, kink or really anything including your clothes if you like, was left at the door. I truly have never seen another business where so many different tribes coexist. I wanted nothing more than to make sure Retail Slut was not remembered just as a store but really a sacred place that had impact on Los Angeles and beyond. ”