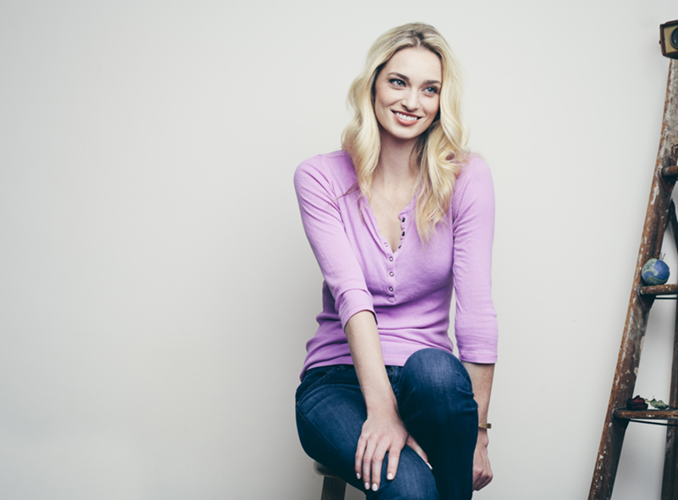 Goals, Self-Discipline and Quarantining with Your Parents — Upload’s Allegra Edwards Tells All

From “hug suits” to disastrous auditions, actress Allegra Edwards phones in with publisher and host Brian Calle on the L.A. Weekly podcast to give the audience a taste of what it’s like to start from the ground up in Hollywood.

What’s a hug suit? Glad you asked. “It’s one of the most disturbing and hilarious things I’ve seen on television,” laughs Allegra, as she tells Brian about her new Amazon series Upload, debuting May 1st. The star of the highly anticipated show, Allegra plays uber-controlling ice queen — and possible hug suit wearer — Ingrid Kannerman.

A little bit sci-fi, a little bit comedy, and definitely some drama, the show explores a world where life after death is an upload, and those you’ve left behind (like girlfriends) call the shots. How can one have a living girlfriend if they’re dead? Well … a hug suit helps with a lot more than just hugging. Tune into the series premiere to satiate your curiosity on exactly how that plays out on screen.

“There’s something for everybody, and I’m really excited to share it with the world,” says Allegra, demure on hug suit details and encouraging listeners to find out for themselves. Upload is her first shot at being a series regular, and she had the ability to build her character organically. Excited about the future, she shares her path to success.

“I still kind of pinch myself that I get to do what I’ve wanted to do for so long,” reflects Allegra. “I have always wanted to [be a series regular], and have never expected to, because it felt like the top of the mountain was just getting on television.” How does one achieve their goals in an industry that is notoriously ruthless and hard to break into? Never-ending determination, and strong sense of self-discipline.

“I’ve been very single-focused,” she explains. With a background in theater and improv, she studied the arts in school and has moved from coast to coast, following pilot seasons and auditioning non-stop.

Preferring television acting, you may know her from a variety of shows, including Modern Family, Orange is the New Black, New Girl and Friends from College. Allegra also has a recurring role in the drama Briarpatch currently airing Mondays on the USA Network.

“I’ve had this attraction to television because it felt like the perfect balance of wide reach and some sense of stability,” explains the star. Her advice? Find your platform, but don’t say no to opportunities. She recently found success starring in the feature film The Social Ones which came out on March 5 and is available to rent or purchase on various platforms, including iTunes, Amazon, Comcast and others.

Not afraid to branch out, she has begun flexing her creative muscles, co-creating and writing a surreal sketch show that can be described as “QVC meets Portlandia.”

You definitely don’t make it this far in the industry without making some mistakes. Brian coaxes his guest to reveal some of the worst auditions she’s had, and what she’s learned since.

Allegra remembers one disaster of an audition, where she strayed from her usual self-discipline and spent the night before an appointment out with friends, instead of at home memorizing lines and preparing. When it came time for the audition, the casting director told her point blank he could tell she wasn’t prepared, and graciously invited her back the next day (where she nailed it).

She’s never put herself in that position again. “To be told point blank that they can tell you’re not prepared is like ‘woof,’” shudders Allegra. She now makes sure she’s well-versed in everything she does, never wanting to feel that disappointment again. “Being memorized is something you can have control over, there’s so much you can’t do, but you can be memorized,” wisens the actress.

From landing dream roles to what it’s like quarantining with your parents, tune into this week’s L.A. Weekly podcast here or find it on iTunes here.