Since the ‘80s, Cyndi Lauper has been tirelessly belting out pop-rock anthems such as “Girls Just Want to Have Fun,” “Time After Time” and “True Colors,” while putting out a string of respectable albums. As relatively recently as 2016, she released the country-rock gem Detour. Frankly, Lauper is unstoppable. These two shows (she playing on Friday and Saturday), see Lauper performing with the Hollywood Bowl Orchestra, which makes for a fascinating smash. Lauper’s voice, though wild and husky, will likely sound gorgeous alongside the technical brilliance of trained classical musicians. “Time After Time” in particular could well have fully grown adults weeping into their seats. Cécile McLorin Salvant also plays. —Brett Callwood If there’s any one artist that works most deeply in touch with the phenomenon of intuition in American songwriting today, it’s Joe Henry. Intuition is an extortionately underrated aspect of the songwriting process. It isn’t something that’s easily learned — to learn it, you have to fail and fail very fucking often — and it isn’t something that’s easily taught, because how does one person show another person how to capture a moment and make it into art? For the better part of his 30 years as a singer, songwriter and producer, he’s honed that sense of intuition into something closer to extra-sensory perception than it is the creation of art. What you’ll experience tonight is an increasingly scarce appearance by this most priceless of all American artists — and the emotions he stirs within you with his songs are of a caliber that only the most intuitive of artists can summon forth. —David Cotner

Even after more than 60 years in show biz, James Paul McCartney is still a people pleaser with an apparently insatiable eagerness to be everything to everybody. On his current Freshen Up tour, which culminates at Dodger Stadium, he and his ace longtime band are playing about 38 songs. Fans are getting a little bit of everything — a smattering of the better tunes from 2018’s Egypt Station (including the rollicking “Come on to Me”), an Elvis-derived obscurity by his early band The Quarrymen (“In Spite of All the Danger”), and homages to his fallen partners George Harrison (“Something”) and John Lennon (“Being for the Benefit of Mr. Kite”). Paul being Paul, banal ditties (“Ob-La-Di, Ob-La-Da”) and mawkish, interminable ballads (“Let It Be,” “Hey Jude”) are juxtaposed randomly with sublime moments of pop grandeur (“Maybe I’m Amazed,” “I’ve Just Seen a Face”). —Falling James The Dollyrots, The Darts

If you’re a working-class hero who can’t afford to see Macca at Dodger Stadium, there’s a much more economical, harder-rocking and femme-tastic power-pop bill happening the same night, at the Hi Hat in Highland Park. Fronted by former Love Me Nots chanteuse-keyboardist Nicole Laurenne, The Darts crank up catchy ’60s-style garage-rock anthems that are powered with punk-rock energy on their new Alternative Tentacles album, I Like You but Not Like That. Laurenne’s sultry vocals and carny keyboards are layered over a raw, feral garage aggression that’s closer in spirit to the primal ferocity of The Seeds, The Pandoras or even The Animals than to the relatively polite music of The Moptops. Headliners The Dollyrots’ new record, Daydream Explosion, leans more to the punk side of things, mixed with an effusive power-pop exuberance. —Falling James Having sold out the Saturday night at the Regent, Jawbox have added a second the following night, and it’s wonderful that more people will have the opportunity to see the recently reformed Washington, D.C., alt-rockers. Originally formed in 1989, the band split in ’97 after a string of excellent post-punk records on Ian MacKaye’s Dischord Records (among other labels) and, but for a brief spell in 2009, were gone (but not forgotten) until this year. But Jawbox are back. There’s no new album yet, but for now fans are going to be happy to hear songs from 1991’s Grippe, 1992’s Novelty, the major label For Your Own Special Sweetheart (Atlantic) and 1996’s self-titled album. Craig Wedren also plays. —Brett Callwood Non-binary indie rocker Ian Sweet will be hosting a residency at The Echo every Monday in July, and that’s wonderful because more people need to hear their beautifully awkward sound. During a recent interview, Sweet told us that, “My sound is constantly evolving depending on the people I’m surrounded by or meeting/the environment I’m immersed in. This has a lot to do with being on tour often, that is where I do most of my writing — in new environments. I always want my songs to bring me to a place of understanding what I’m going through or trying to make sense of situations by framing them in time.” All of that will be clear throughout this month. —Brett Callwood

“How many fucking dreams must I have about you?” Sofia Bolt croons slyly on “Get Out of My Head,” from her debut album, Waves. “I moved across an ocean to get away from you.” Her sullen verses give way to a breezy chorus in which the Parisian native formerly known as Amelie Rousseaux lets her anger drift away in with a purifying, cathartically carefree melody. It’s a provocative introduction to a fascinating singer who relocated from France to Los Angeles two years ago. Not many new artists have collaborated with legendary pop tunesmith Van Dyke Parks, who worked on the record and also performs tonight, but it’s becoming increasingly clear that Bolt isn’t like most other singers. Her confessional vocals are framed by her rhythmic, angular guitar accents on “Closing Time” and the more intimate idyll “Ojai.” —Falling James 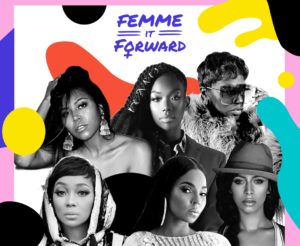 Femme It Forward will be an evening of live music from some of music’s greatest names in R&B, including Ashanti, Brandy, Monica, Keri Hilson, Amerie and Lil’ Mo. Presented by Live Nation Urban, the new multi-platform series comprised of lineups curated by all females will spotlight female visionaries in the entertainment industry — both in front of and behind the scenes. The shows have featured both new and older female acts, from superstar Cardi B to newcomer Nicole Bus. This time, the mini festival is slated to take over Microsoft Theater in downtown Los Angeles with the most nostalgic names in ‘90s R&B. Of course, headliner Ashanti is no stranger to the tour life and is guaranteed to tear the stage down. —Shirley Ju

On her fifth studio album, Be the Cowboy, Mitski Miyawaki alternates between intimate, confessional pop passages like “Geyser” and harder-rocking art-rock/new-wave opuses such as “Why Didn’t You Stop Me?” On the mournful, acoustic guitar–driven “Lonesome Love,” the Japanese-American vocalist belies the song’s folk-pop setting when she pointedly reveals, “’Cause nobody butters me up like you, and nobody fucks me like me.” Mitski’s observations imbue the upbeat piano pop of “Me and My Husband” a hint of poetry: “I steal a few breaths from the world for a minute, and then I’ll be nothing forever.” Julianna Barwick, whose haunting elegy “Star Luz Black” was a moving highlight at L.A. Phil’s recent Noon to Midnight fest, wraps her vocals in loops and layers of dreamily engaging atmospherics and sublimely hypnotic echo chambers. —Falling James Bad Religion just never get old. Every gig is an event, every performance something to get super-excited about. That’s partly because Greg Graffin, Brett Gurewitz and the boys seem to be having a great time every time they set foot on stage. But also, the albums have been of a remarkably consistent high standard. They rarely (if ever) put out a dud, with this year’s Age of Unreason once again wowing fans and critics. Of course, Bad Religion have always been outspoken when it comes to matters of social and political unrest, so the current awful climate is food and drink to them. We need the band more than ever, and they’re delivering. —Brett Callwood

Jesca Hoop’s music has been praised by Tom Waits, and the California native and longtime British resident has worked with Iron & Wine, Eels and Blake Mills, and twined her unusual vocals with the eerie harmonies of Nicole Eva Emery, who also performs on this bill. On her latest record, Stonechild, produced by John Parish (PJ Harvey), Hoop’s bewitching singing is interlaid with her percolating, percussive guitar patterns to stitch together mesmerizing idylls that are both dreamy and rooted firmly in the earth. Special guests Lucius, Kate Stables and Justis add to the tonal variety, but ultimately it is Hoop’s abstract yet introspective songwriting and solemnly lulling vocals that create this strange mood of enchantment. —Falling James For every “legend” and “icon” of the ‘60s and ‘70s, there are buckets full of bands that were there, they rubbed shoulders with the rich and famous, but they didn’t quite break through. Sometimes, it’s because they weren’t very good. But oftentimes, there’s gold to be found by digging into the obscure. The Hollywood Stars were assembled by Kim Fowley, with a sound taking juicy bits from Bowie, Sweet and Cockney Rebel, with a bit of Mott the Hoople thrown in for good measure. They shared stages with the likes of the New York Dolls, and then they were gone. Last year, they got back together for a show at the Bootleg, and now they’re back again at the Whisky. Hammered Satin and Velvet Tinmine also play. —Brett Callwood